What is the best way to drive AC synchronous motor? 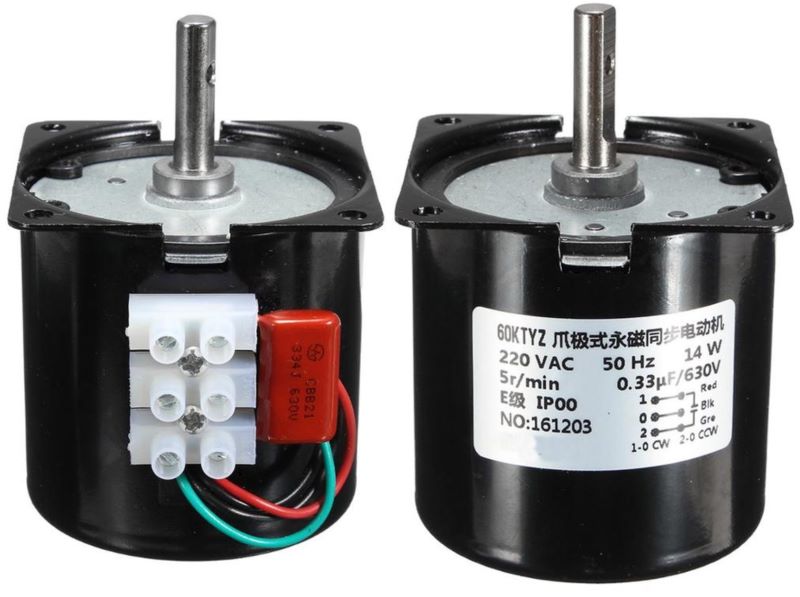 If I connect mains to 0 and 1 terminal it drives CW, if to 2 and 0 - CCW. In my project I have MCU that will drive motor, change rotation direction or stop motor based on signals from sensors. I don't need to control motor speed.

Is it OK in this case just to use electromagnetic relays? Simplified schematic is shown at picture below.

Is it OK in this case just to use electromagnetic relays?

Well, maybe. The problem with motors is that when you first apply voltage to them, like when you switch a relay, they will typically draw a great deal more current (briefly) than they do when running.

So, if you us a relay with contacts rated for the running current, you will normally damage/destroy the relay contacts in only a few start/stop cycles, since they will briefly see much larger current levels.

The quick answer is yes, but. You must make sure that the relays are big enough to handle the surges. If you don't, you'll either burn the contacts so the motor doesn't run, or weld them together, so the motor won't shut off OR you'll short the power line and (with luck) pop the circuit breaker that feeds the motor.

In these "Single Phase" motors, you only need to use the cap for changing the phase, thus artificially creating a third phase, so no need for the resistor (it's the same thing with the motors on celling fans), so that's that. If that was intended to be a RC snubber it's in the wrong place, however you still need a cap for that third phase genration,

About the relays, these motors usually have a high inrush current, and relays (at least the ones I bought last time from finder for the same application) work fine for just connecting and disconnecting the power from the motor, but you don't mention how you want to change the rotation. In my experience, they work fine connecting and dis-connecting 150W ebm HVAC intended fans, so your 14W motor should be OK. (the rating of that relay is what makes it appropriate to your application). This is a standard way of controlling the power flow to fans in Building Mass Control (BMS) systems.

One alternative is using a Triac, driving it with an optocoupler (same way you control your relay with a transistor on your low voltage side). a Triac in this setup would also allow you to have some sort of an open loop control for the speed of your motor (same procedure used in dimmers and celling fans). you can buy the built module on ebay for like 4$. but if you design it yourself, then you would definitely need snubbers (or other methods like TVS diodes rated on high enough of a voltage) to suppress the spikes when disconnecting the motor but I remember working with a 800V triac on a 150W 230V motor and it worked just fine.

Also, zero crossing is used to make sure that you switch it at a time when the voltage is close to zero, reducing harmonic noise and the spike generated, but with proper supressing circuitry, it wouldn't be necessary.

Not the answer you're looking for? Browse other questions tagged motor motor-controller ac-motor or ask your own question.

0
How do I wire this motor's terminal plate, and is this motor continuous duty?