The circuit can be explained by viewing the transistor as being under the control of negative feedback. From this viewpoint, a common collector stage (Fig. 1) is an amplifier with full series negative feedback. In this configuration (Fig. 2 with β = 1), the entire output voltage VOUT is placed contrary and in series with the input voltage VIN. Thus the two voltages are subtracted according to Kirchhoff's voltage law (KVL) (the subtractor from the function block diagram is implemented just by the input loop) and their extraordinary difference Vdiff = VIN - VOUT is applied to the base-emitter junction. The transistor continuously monitors Vdiff and adjusts its emitter voltage almost equal (less VBEO) to the input voltage by passing the according collector current through the emitter resistor RE. As a result, the output voltage follows the input voltage variations from VBEO up to V+; hence the name, emitter follower. 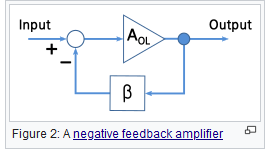 The negative feedback amplifier can be expressed with this equation:

How can the emitter follower be expressed in this way?

My Thoughts So Far

As mentioned in the wiki article the summation point IN - OUT is applied to Vbe:

This isnt a question about how the feedback mechanism works. I understand the gain of the transistor causes base current to be multiplied increasing output voltage across \$R_E\$ which in turn decreases base current. This question is only about modelling the circuit as a negative feedback amplifier

Not the answer you're looking for? Browse other questions tagged bjt feedback emitter-follower negative-feedback common-collector or ask your own question.