Op-amp with voltages in both inputs

I'm trying to solve a practice problem, which is represented by the schematic below. 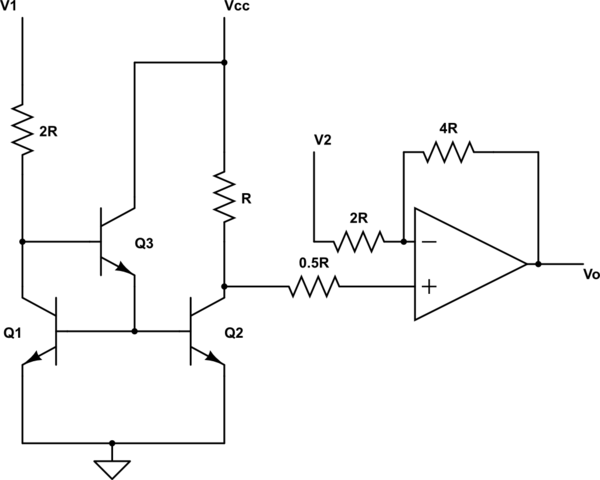 My steps to solve the problem:

If my calculations are correct, this is the input at the non-inverting terminal of the opamp. And this is the point where I can't determine the operation of the opamp, and am conflicted. I've seen how the most common configurations are wired, but none of them feature this topology. Textbook inverting configurations require the non-inverting input to be grounded. Inverting configs require the inverting input to feature feedback, but it's input is grounded. Differential amplifiers have another resistor after 0.5R to ground.

I also understand that, ideally, the voltage at the input terminal should be the same as the output of the mirror, since no current flows in or out the terminals (in an ideal amp) and there's a virtual ground between the two terminals.

Any pointers on how to decipher this are appreciated.

Browse other questions tagged operational-amplifier current-mirror or ask your own question.

1
What OpAmp configuration is used in this circuit?
1
What should be the output voltage for Virtual Ground to occur in Inverting OpAmps?
0
Op Amp Summing Point Problem (Ideal)
1
Op-amp circuit analysis without input signal
0
Why the don't the theoretical and practical output of comparator match for small input?
1
mV difference not detected by LM741 opamp comparator
2
Positive and negative feedback in opamp in same circuit
1
Voltage Follower - OPAMP
1
Current mirror with mosfets
2
Why doesn't the negative feedback current in an op-amp inverting amplifier drive the op amp into saturation?