Are there two types of resistance?

I'm confused again about electricity. There seems to be two types of resistance, a dissipative and a restrictive one. Everything I've read, however, says there's only one type of resistance.

Notes I made a small but potentially important edit. When I used "coil" in my example, I meant nichrome wire formed into a coil used as a heating element as commonly found in soldering irons, space heaters, etc. A poster clued me in that "coil" might be interpreted as an induction heater.

Btw, I've had nothing but excellent experiences with this community. I am deeply touched by all of your efforts and assistance! While it maybe off topic, I cannot allow such good deeds to go unappreciated. Thanks for all the help!

Maybe an actual circuit would help. R1 represents a heating coil and R2 is a potentiometer. 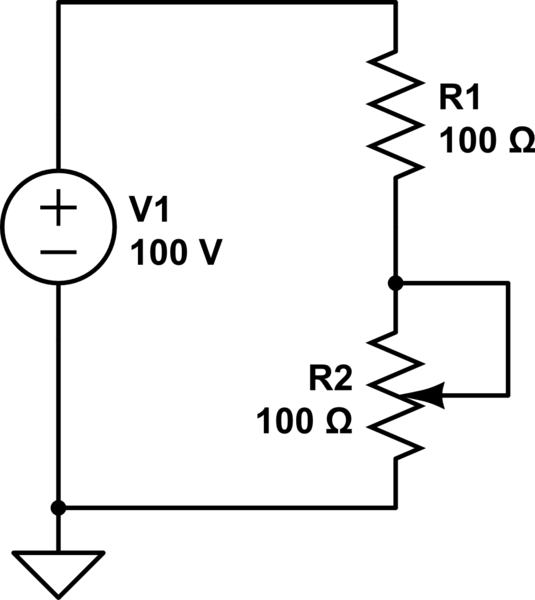 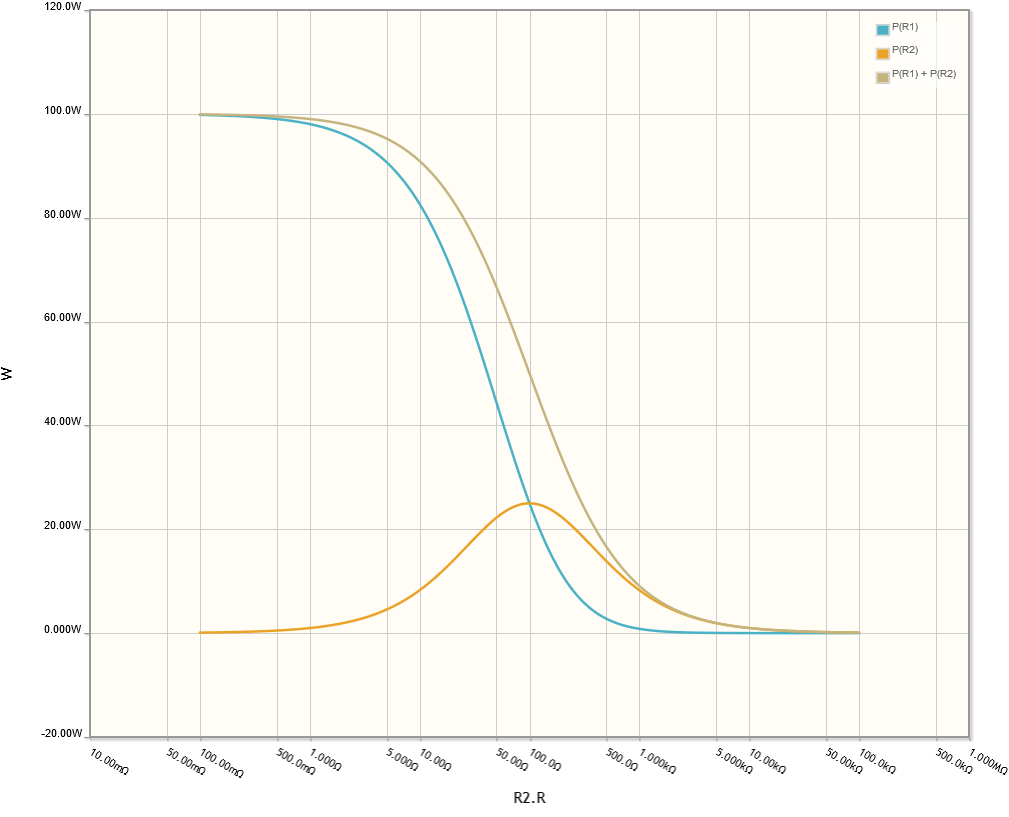 There's only one kind of resistance. Resistors are devices that obey Ohm's Law. There are two equations at work here for power:

As a consequence of those:

That's it. There's no magic here. Two resistors with the same resistance carrying the same current will dissipate the same power. If the power is different, then the resistance and/or the current must also be different.

It might also help to consider the extremes and what has to happen in the middle. When R2 = 0 ohms:

Now what if we made R2 infinite (an open circuit)?

It turns out R2's power reaches a maximum when its resistance is the same as R1. This is called the maximum power transfer theorem.

[Disclaimer: I have no idea if any of this is how old toasters worked. But the circuit theory is valid.]

The potentiometer heats up too, it's just that this isn't its intended purpose.

This is, in fact, the reason you don't use a potentiometer in the way you've described. If you were to actually hook it up like that, it's quite likely that either the pot would overheat, or both the pot and the heater would remain cool. Instead, the proper way to do this would involve using phase angle control with a thyristor for AC, or PWM control with a FET for DC.

There is only one kind of resistance and it is both restrictive and dissipative.

Resistance is unique and defined yet has many adjectives depending on how it is used.

"Everything has some resistance", including insulators, also known as dielectrics. Insulators have two components of resistance, the effective series (ESR) and the leakage current parallel equivalent.

Semiconductors have variable resistance controlled by an electric field in a tiny junction by voltage with some exponential factor. The low end of R is limited by fixed bulk resistance due to chip size and thus power dissipation limit.

There are special effects at a higher frequency called Skin Effects from Eddy currents which adds resistance to conductivity as the current circulates to oppose the voltage, below the surface like the force on a paddle in the water.

When motors are mechanically loaded, their inductance is shunted by a parallel resistance.

Metal conductors have a positive temperature coefficient (PTC) and both conductivity and temp. sensitivity depends on the metal. Some alloys (NiCr) are used as heater wires while different metal oxides are PTC for temp. compensation or used as resettable fuses and others are NTC for inrush current limiting (ICL).

Damping: a low resistance source such as an audio amp (voltage source) and the inductive “kickback” or back EMF of a woofer.

Dissipative: a resistor is a conductor with losses that creates heat energy unlike ideal reactive parts like L, C. Transistors also dissipate heat due to internal resistance which is controlled by bias voltage or current.

Lossy: any non-ideal conductor including inductors and capacitors which have low series resistance.

Leakage resistance: high resistance in parallel with insulators or dielectrics or capacitors or batteries which shared similar properties to store charges.

Toaster Pots are not resistors but rather thermostats. They use the bending properties of bimetallic strips with heat with pot-controlled mechanical deflection to represent the temperature rise before switching off.

Often many examples neglect resistance when it is not significant compared to the load, such as a switch for ON/OFF. Electronically fast-switched transistors with pulse width modulation (PWM) have the average resistance which depends on the total load resistance divided by the duty cycle where the switch resistance is selected by computing the temperature rise for some low ratio of the load power much less <<1% when on.

... and many more examples, remember everything has resistance !

The potentiometer, on the other hand, can equally resist the same amount of current flowing to the coil, yet it doesn't dissipate much heat at all.

It converts electrostatic potential energy into heat the same way the heating coil does.

But the heating coil is designed to pass a large current, and generate a lot of heat, without melting.

If you tried to pass the same amount of heat through the potentiometer as you can through the heating coil, it would heat up so much that it melted or caught fire.

Why doesn't the potentiometer heat up as much as the coil?

Because the user has the wisdom not to push so much current through it that it would melt or catch fire.

If the potentiometer is the same resistance as the coil, and the same current is flowing through both, both will heat up the same.

As you mentioned, the coil heats up, but have you ever thought why the wire is looped around and made into a coil? to include a longer length of wire in a smaller space. so why longer length? to have higher resistance in the wire. taking the power equation in its simplest form:

So one thing that I believe you did not understand while looking at this question, is that if you put a pot with a coil in series, you are just adding a fixed resistance (since there is no connection to the movable bit of the pot) in series with your coil. The pot would REALLY get hot if you put it in series with a coil, say if you are connecting it to mains (230 Vrms) and your pot is 10K and your coil is, say 15 Ohms, you are getting 5.27W of loss from the original 5.28W!! That would make the resistor really hot! (ofc depending on your type of resistor, but a normal chip SMD or a THT used in dev kits would start to get so hot that it'll affect it's resistance)

There is no such thing as a restrictive resistance and a dissipative resistance. The fact that a resistor "resists" current flow is in fact because of dissipating their energy into heat. Now you can make use of this fact in a coil, generating heat, and it would be a problem for resistance in your wires and other stuff, resulting in power loss.

Are there two types of resistance?

In a way there are, but "type of resistance" and "restrictive" are not the terms that are normally used. Resistance dissipates energy as heat. Inductive and capacitive reactance present forms of restriction to current flow without dissipating very much power.

The assumption that you presented does not describe "two types of resistance at all. Other answers explain that.

All resistors have (only one kind of) a resistance R across which a voltage drop V = I*R is lost. This drop is subtracted from the input voltage and (if the circuit is powered by a constant voltage source) the current I decreases. This is accompanied by power dissipation in the form of heat.

If the heat cannot be dissipated, the temperature of the resistor begins to rise and it turns into a heater. This is a desirable property in heat engineering.

In electronic circuits, however, heating is an undesirable property, and therefore it is done so that the temperature does not rise. For this purpose, the applied power must be less than the resistor nominal power.

The desired property here is only the voltage loss which is used to decrease the input voltage. Typical examples of this technique are the rheostat and voltage divider.

1
Using audio amplifier speaker output to drive an electromagnet
4
Total resistance with resistors bridging two branches
4
Are there side effects to using too much resistance for an LED?
0
Varying resistance on same types of capacitors
0
Why does the resistance change when additional resistors are added here?
0
Is heating the nichrome wire with phone battery possible?
1
Conversion from 0-10V to resistance - Methodology