How can the current change suddenly in an RC circuit?

I was trying to simulate a circuit where a capacitor is being charged then discharged. I used an oscilloscope to measure the voltage and the current. I've noticed that when I switch the state of the capacitor from charging to discharging or from discharging to charging, the current suddenly changes to a different value.

I can understand that the voltage can change immediately, but the current? Shouldn't it have a smooth curve?

What is the explanation of what's happened with me?

What happened with me: 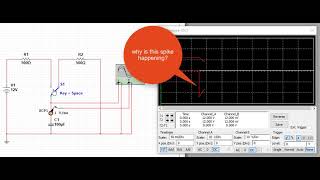 Voltage and current measurement in an RC circuit on YouTube

I can understand that the voltage can change immediately, but the current?

Shouldn't it have a smooth curve?

No, the simulator is correct.

Exactly identical logic for discharging. You connect 12V "battery" (capacitor) via resistor to 0V, so you have current. Which falls as the "battery" voltage falls.

Capacitors resist changes in voltage, not changes in current (that is the inductor's role).

Not the answer you're looking for? Browse other questions tagged capacitor circuit-analysis current resistors simulation or ask your own question.

5
What actually happens in a RC circuit?
0
Capacitor discharging
0
Circuit with switch - express the current for different times
12
What does 'capacitor jumping up and down' mean and what work does it do?
11
Why doesn't an RC circuit change the shape of an input sine?
3
Can someone explain how this switched circuit charges and discharges the capacitor?
0
Which resistors are taken into account when evaluating the discharge of a capacitor
0
What indicates a capacitor being charged or discharge in a circuit
1
How does the capacitor work?