How did old television screens with a light grey phosphor create the darker contrast parts of the display?

Many old television screens have a very prominent "light grey" color to the glass, I'm guessing from the phosphor, create darker areas if the effect of electrons make the phosphor glow?

Is it an illusion due to contrast between the brightly lit and darker unlit phosphor or can the screen actually darken somehow?

Here are some photos of old TVs from the 70s: 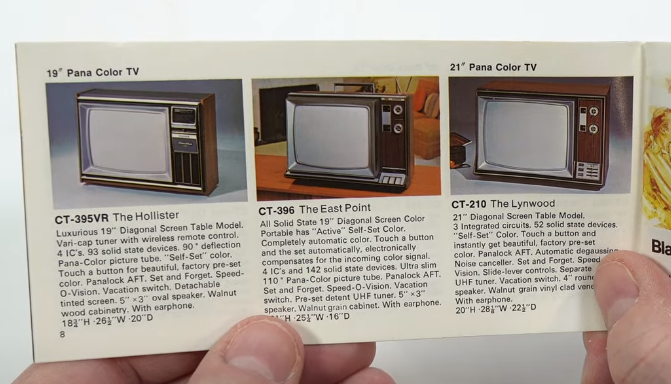 Forget old fashioned TVs, have you ever watched a PowerPoint in a normally lit conference room? The projector screen is white until you turn on the projector, at which point it seems to become dark grey.

This is because your eyes are sensitive to relative light levels and not absolute. Black doesn't require no light, it's just less light. You can can make a white object dark just by putting something brighter next to it. Projectors, LCDs and CRTs of all kinds exploit this effect.

It's basically an optical illusion. I never ever remember anything but a very dark screen when I was a kid waiting for "the box" to warm up and then my mum shouting that the TV needed some money in the slot to make it work (damn those rental TVs in the 1960s).

Consider this picture (taken from this wiki site): - 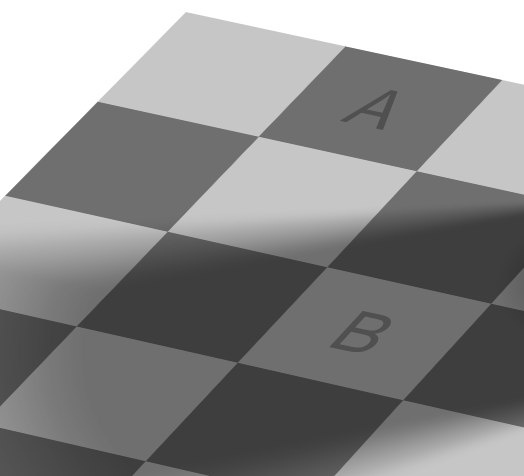 It looks like the "A" square is darker than the "B" square doesn't it?

But if I use paint.exe to sample A's colour and draw a line from A to B we see this: - 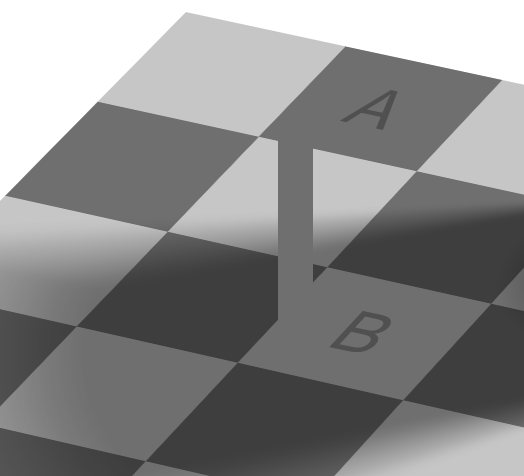 You don't have to believe me. Just copy the top image and try it yourself.

Your brain can play some amazing tricks in trying to make sense of the optical info it receives.

It was not watched in as bright ambient light as a good photo of the tv receiver needs when the camera was supported manually. Or the photo was taken with long exposure time having the camera on a tripod. The old CRT television was placed to as dark corner as possible for good contrast. I have had a CRT B&W television and it was useless if the daylight in the room wasn't dimmed by drawing the curtains in front of the window.

Other aspects: The advertisement photos from 1970's can be heavily retouched for the appearance that was then thought to be the most attractive. They can even have "for ads only" dummy CRT or an inserted mask for easy good looking no-reflection photographing. I guess too dark screen could be seen as "it will stay dark".

I have just now one CRT from 1980's in front of me. I brought it out from the storage only to see it due this case. It doesn't look grey, it's a little green. It's B&W phosphor glows white, not green and it looks substantially darker than CRTs in questioner's ads.

Our eyes are amazingly adaptable to ambient light level:

Yet in each cases, we can see gradations of light (from dark to light). Even small variations in light level are discernible. In the case of a TV screen that starts out "grey" in ambient light, we can discern an even slightly brighter image. The ambient "grey" background is established in our brain as the darkest part of the image. The screen background does not darken.

You ask if the apparent darkening of the phosphor screen is an illusion. Yes....there are a great many aspects of human vision that are illusory, suggesting that much brain processing goes on between eye and conscious perception.

Advances were made over the years in reducing the reflected ambient room light, yielding a darker background. The photo shows two colour CRT screens. 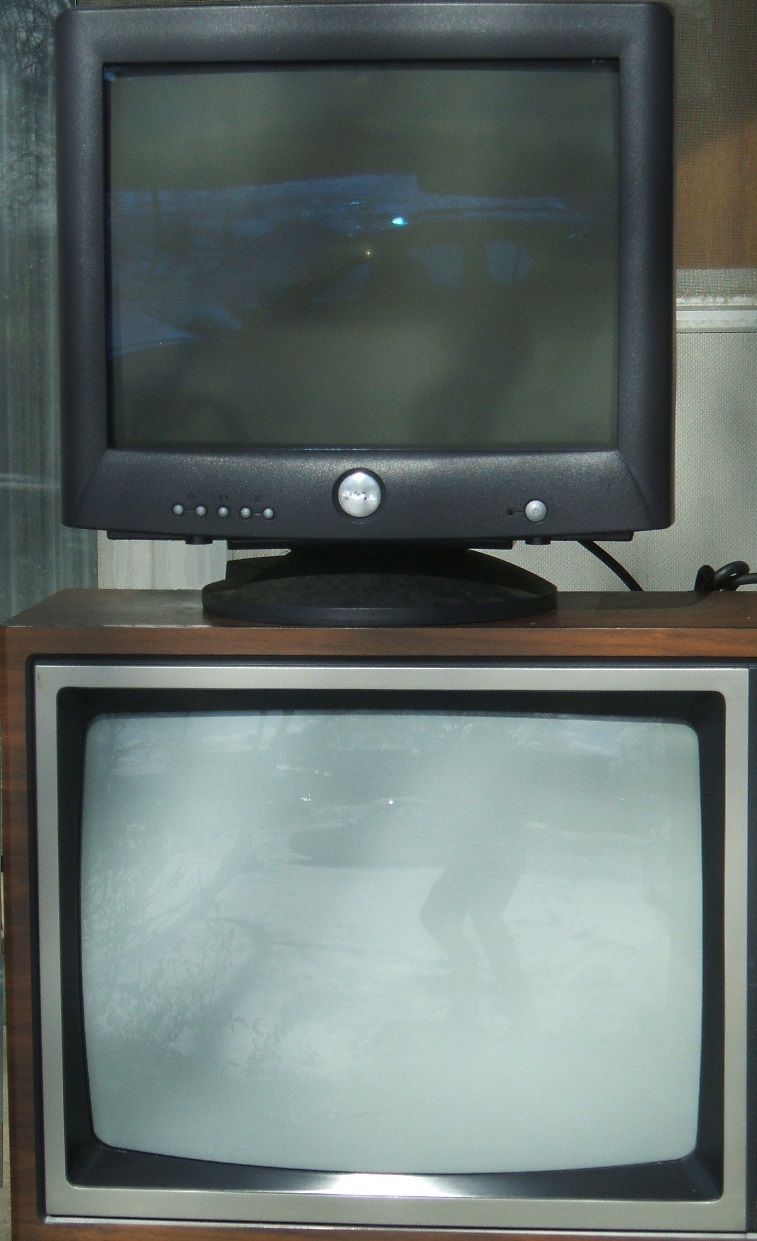 If you go a bit farther back in time, to so-called "black and white" TV sets, not only are the other answers correct as concerns contrast, but there's a "color correction" that takes place in our neuroptical perception. We all perceived the images as grayscale, of course. However, if you were observing just the overall light produced, perhaps looking thru a window from outside, or thru a doorway from down the hall, the TV output has a light-violet tinge.

At one of the companies I worked at, there was a room we called "the cave". It was a very dimly lit room for the CAD people doing work with CRT monitors, with the brightness turned down, which resulted sharper images. I still have two CRT monitors (Hitachi CM722, Viewsonic G225FB), and in a dark room, you're getting close to true blacks with these and better CRC monitors. I also have an LCD (IPS) monitor, and in a dark room you see the back lit light coming through producing a dark shade of grey, and brighter if viewing angle is not straight ahead (so if looking at center of screen, the corners are brighter).

However, in a nearly black room, the phosphors on a CRT monitor can give off a glow for a while after the CRT monitor is turned off, and those phosphors can also pick up some energy from ambient light in the room (so just after turning off a light, you get a bit of glow). I assume that OLED monitors or TV's do not have this effect.

Anything to enhance brightest and contrast also raised the power levels needed to transmit thru the aluminum oxide but also resulted in reflections of the phosphor forward.

They applied a thin aluminum oxide film that appears grey to reflect the light forward and also spread heat evenly to the glass then lacquer coated this.

The glass thickness affect transmissibility and reflections, so later this was also carefully tinted with additives that were also slightly magnetic for other reasons and lead to the glass to block harmful XRays.

0
Old tvs, how did storing settings work, and what changed in the tv when we tuned a channel?