The regulator in question: NCP161AFCT330T2G. We use it in a USB device to convert 5V to 3V. The device will only be used at room temperature.

It says in the datasheet: “The value of the input capacitor should be 1 µF or greater to ensure the best dynamic performance.” About the output capacitor however it says: “The recommended capacitor value is 1 µF.”

It depends on the capacitor.

First of all, the datasheet does say that larger output capacitor improves response for changing loads.

But your capacitor is so small in physical size, that due to size, a matching size 1uF could be better than 10uF. Unless the voltage rating is much more than the required 3.3V,.the capacitance will significantly drop due to DC bias.

The final thing is USB specs though. It only allows for 10uF at the device input to limit surge current. Using a 10uF at the input and another 10uF at the output of the regulator could easily exceed allowable USB ratings. Also the high capacitance at the USB inlet port can cause significant voltage spikes and ringing when cable is plugged in unless dampening is taken care of, so be careful about the design.

A regulator (linear or switching) needs the output capacitor for two reasons: 1) transient handling and 2) regulator stability; people often only think of the first but stability is usually more important.

The specified size is the minimum required for stability. You would use a bigger cap for improved noise performance or transient tolerance. Often there are curves in the datasheet.

Also ceramics are really ugly on voltage derating so a 1µF/6V driven at 5V could have only like 500nF of effective capacitance (that's dependent mainly on dielectrics). Usually the minimum capacitance stated is the effective one, so you may need to derate.

However a bigger cap is bigger and more expensive, and also may have worse parasitics. Even on ceramics an 0402 has better ESL/ESR and it can be placed nearer to the part than an 0603. I had a regulator failing because the track was something like 0.5mm longer because I wanted to use an 0603 and support said "you must use an 0402 and put it like in the recommended layout". So study your datasheets carefully (regulator and capacitors).

One last thing: some (older) regulators actually need some ESR; for example to stabilise an LM1117 with ceramics I actually once put a 1 ohm resistor in series with the cap.

On the input side the capacitor is only needed to keep the regulator supplied under load transients (or its own transients, if it's a switcher) so there are usually fewer problems. 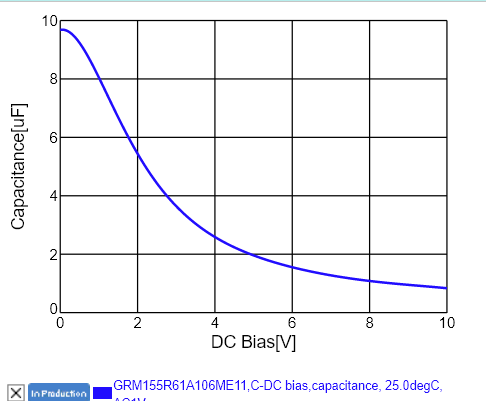 For a typical cheap MLCC, you'll be lucky to get even 3uF at 3.3v bias in that package size, which is close enough to 1 uF that it doesn't matter.

Not the answer you're looking for? Browse other questions tagged capacitor voltage-regulator or ask your own question.