Why has my tweeter speaker burned up?

I bought a powerful tweeter (or so I thought) to experiment with the ultrasound. The device is quite heavy, and it is rated at "350 watts RMS/700 watts peak": 2'' Titanium Super Tweeter PDBT78

To make the long story short, the thing burned on me with a sine 20-kHz signal at average (real) power of 9.6 W. How is that possible?! The specs promise 350 W "RMS" (I think they mean average power), yet it burns at under 10 W?! Please review my setup below. Maybe I calculated the power incorrectly and came to a wrong conclusion. This is how I measured the voltage and current: 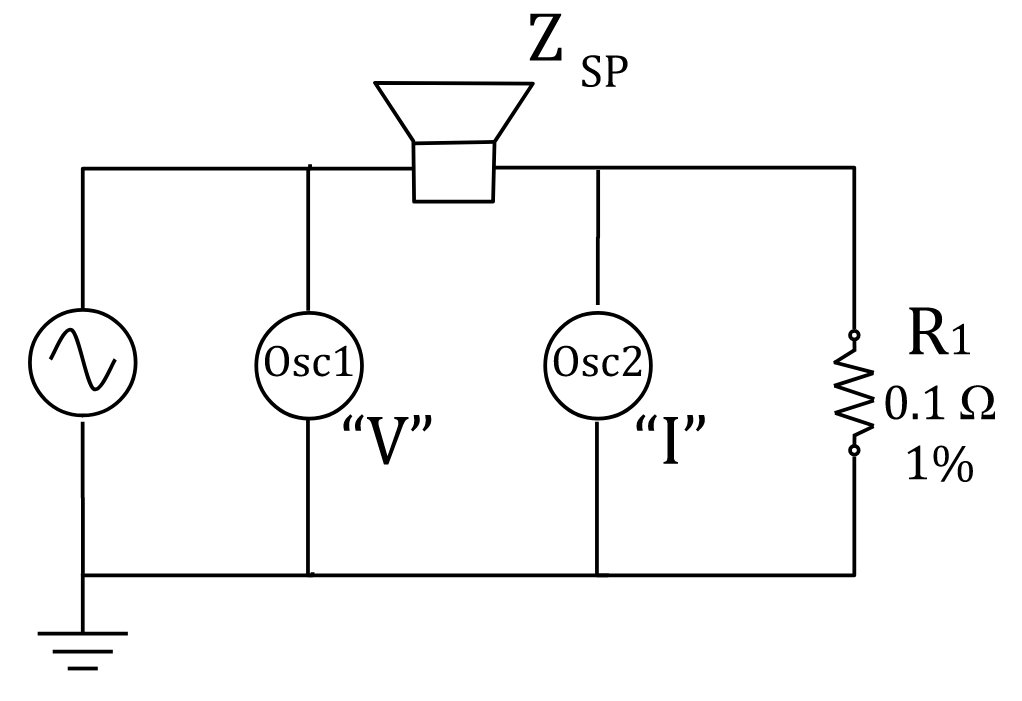 The scope displayed waveforms for the voltage and the current and showed their numerical RMS values on the screen. When the speaker burned, the scope showed \$V_{RMS}=40\:\textrm{V}\$ and \$I_{RMS}=0.24\:\textrm{A}\$. Thus, I concluded the power was less than 9.6 W. — I don't know how much exactly, because I did not get to measure the phase shift (:

Thank you for your interest in solving this puzzle.

PS: I have received a response from the manufacturer:

This confirms the community answers.

The Pyle description is written to be easy to understand for someone with modest technical knowledge putting together a car audio or other speaker system. The description tells them that if they have a 350 W amplifier and a 4-8 Ω woofer then this tweeter is suitable to use with them. It doesn't mean that you can put 350 W into just the tweeter.

For example, in the 1970s, Philips were specifying the ratings of individual speaker components.

In later years, it may have been felt that specifying the system power would make it easy to select individual components while configuring a system.

The statement in the following specifications confirms that.

'System powers tabulated below are for complete two or three-way systems making use of the listed loudspeakers; corresponding cross-over networks and recommended enclosure volumes are listed on pages 4 and 5.' 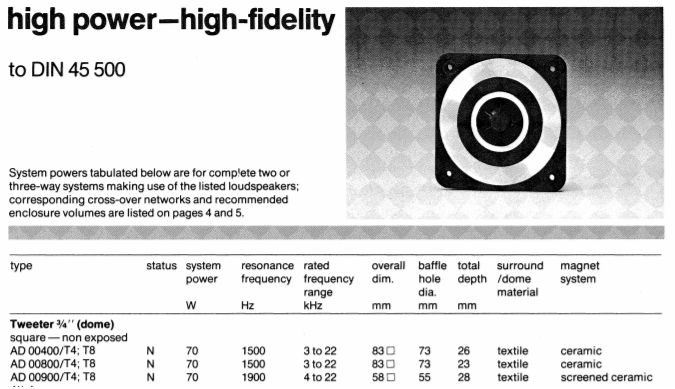 A pair of loudspeakers, configured by Philips years ago, had the following components:

It shows that the tweeter power is indeed quite low when compared to the system power.

I'm afraid that you are another Amazon victim. I note that you have linked to an Amazon ad rather than a manufacturer's datasheet which would explain how the device is rated and expected operating conditions. Our motto here is, "No datasheet? No sale!".

I expect that a similar device from a reputable manufacturer might give the amplifier rating at several hundred watts but when used with a passive speaker crossover setup which might filter out a lot of power.

The power ratings for audio equipment are often completely bogus. Check out the amount of copper in a 350W motor (and note that a speaker is also essentially a motor, only the motion is linear instead of rotational): 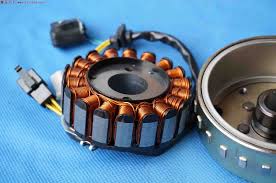 There's nothing in the photo for size comparison, so I'll just note the diameter is about 5" (13 cm).

Guessing a power rating from a photo is akin to palm reading, but your speaker indeed looks like it could handle a couple of Watts, certainly not hundreds. I assume the 2" in the description refer to the size of the magnet, so the coil diameter is probably less than 1".

PS. Try to get your money back from the seller. There's nothing dishonest in claiming the speaker was defective, after all, you didn't exceed its maximum ratings, did you?

I'm going to start by addressing only one (admittedly rather minor) point raised in the question--that of the impedance.

The impedance of a loudspeaker isn't a single fixed number. It's generally a curve that will look at least vaguely like this (hand drawn, so don't try to read too much into the details): 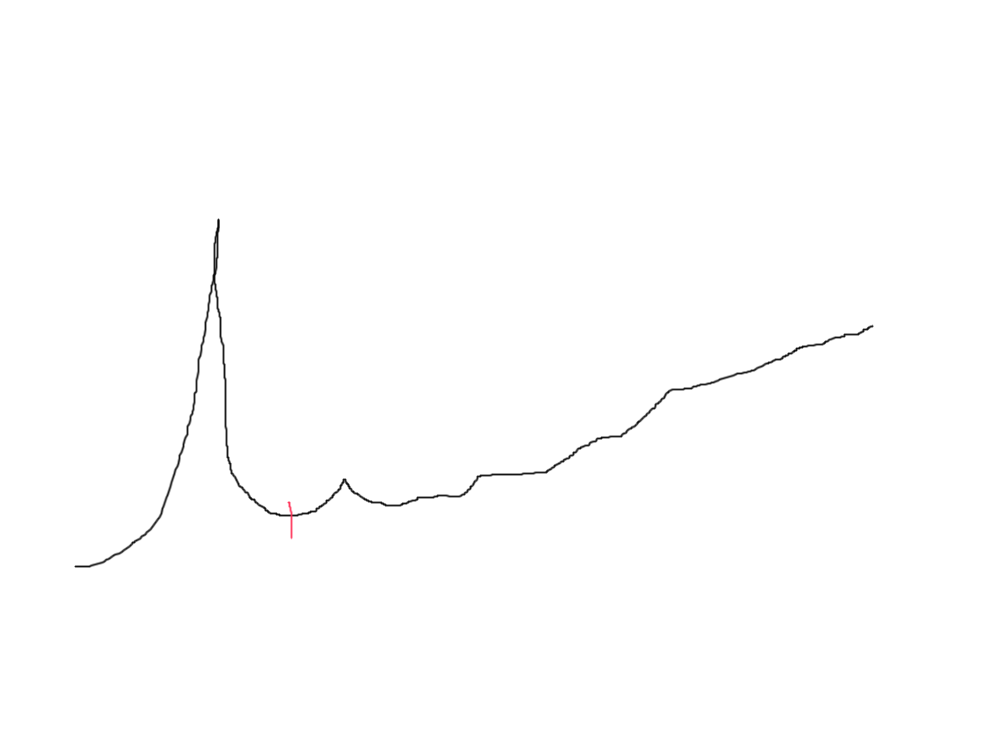 That tall, narrow spike is at the speaker's free-air resonance (fs).

The rated impedance is then at the first minimum above the free air resonance (roughly where I've drawn in the red, sort-of vertical line).

As such, it's not only reasonable, but entirely expected that for a tweeter, its impedance throughout its entire normal range of operating frequencies will be (often substantially) higher than its rated impedance.

Getting back to the power situation, I'd agree with those who've pointed out that a normal tweeter would never be expected to handle a power input of tens of watts, not to mention hundreds of watts.

I'd add, however, that the amount of power a tweeter is expected to handle is rarely a function of the sounds its really intended to reproduce. Rather, it's almost entirely a matter of how much abuse the manufacturer expects the tweeter to be subjected to. When/if you drive a bipolar amplifier beyond its capabilities, it will clip. This will typically result in drastically increased power at higher frequencies. A FET- or tube-based amplifier will also clip, and when it does, the power and higher frequencies increases as well--but this happens much more...violently with a bipolar amplifier. Exceeding its power capabilities even a little bit can increase harmonic distortion from a bipolar amplifier a lot, whereas with a tubed amplifier you have a fairly broad range in which you can increase power output with gradually increasing distortion.

Reproducing normal music requires very little power at higher frequencies, so the power handling capability of a tweeter primarily reflects the manufacturer's estimation of how likely you are to drive your amplifier into clipping (and/or how much clipping they think you'll tolerate).

Not the answer you're looking for? Browse other questions tagged power speakers ultrasound maximum-ratings power-measurement or ask your own question.