The main is to move two MG995 when a muscular contraction is performed (reading using myoware adafruit sensor.) The proposed circuit has two 18650 batteries of 2200 mAh each of it, two charged modules TP4056 (one of it for each battery), a voltage step-up MT3608, a Bluetooth module, and an Arduino Nano for control.

The development was proposed using two PCB circuits: one for control (Arduino, myoware, and Bluetooth) and the other for power (2-TP4056 and the MT3608.) Two 18650 batteries are connected in parallel.

The output of the two batteries (3.7 V) after passing through the TP4056 is connected directly to the two servomotors power and to the MT3608 (which boosts the voltage to 10V and feeds the Arduino board through Vin, Arduino regulates the voltages and power up the Myoware and the Bluetooth board through the 5V pin.)

There is another switch that turns off / on all the circuits after the TP4056 modules.

I attach the schematics of the circuits. 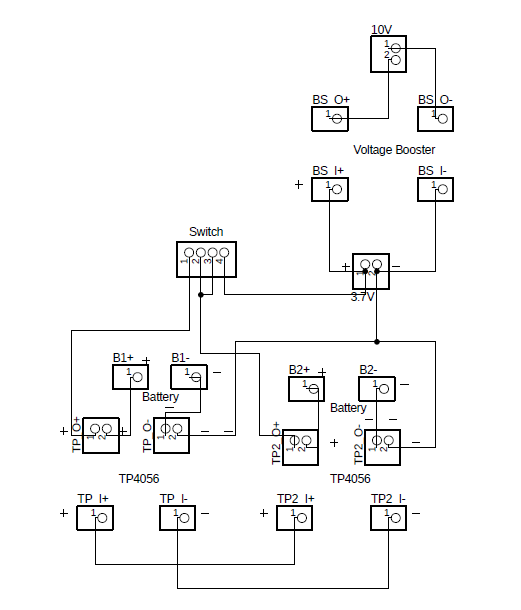 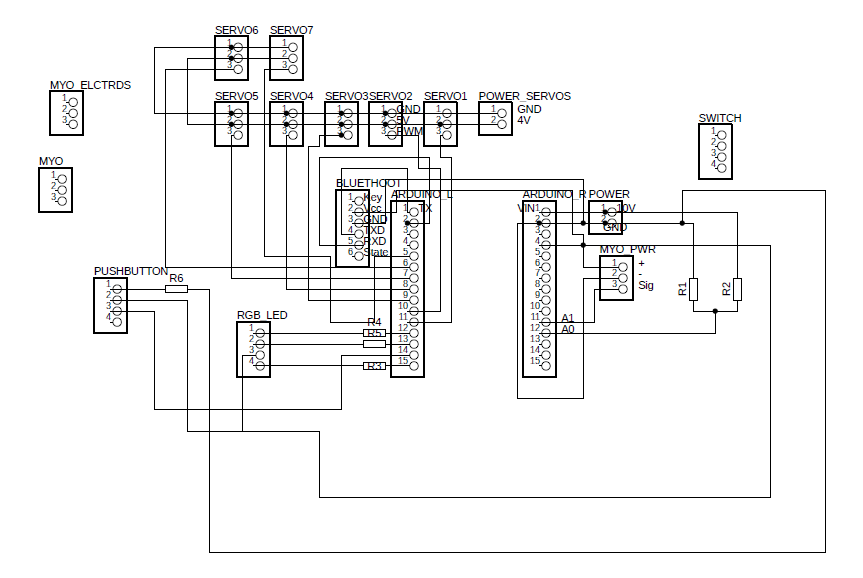 To power 1 servo everything works perfectly, the voltage goes down 1 volt when its moves. The problem is that when I connected the two servos (connected, not even moving) both start jittering and no moving.

Measuring the voltage in the servo input when two servos are connected, I realize that the voltage goes down from 3.7V to 2 volts when they jitter.

I decided then to add another MT3608 between the two TP4056 and the servos boost the voltage from 3.7 volts to 7 volts. The problem still continued, moving perfectly with 1 servo but jittering when both servos were connected.

I decided to increase the voltage from 3.7 to 12 volts and decrease it with a voltage regulator to 7 volts again. It was worse, even not 1 servo has enough power to move.

I thought that the problem was related to the TP4056 module, so I connected the output of the two batteries directly after the TP4056, bridging it, and the problem continues.

Hope you help me guys, have no ideas left.

If you have any other recommendation, all corrections are recived.

UPDATE: I connected 4 18650 batteries in parallel directly in the power input servos. The 4 batteries feed directly the servos (with 4.2 v when charged) and power the MT3608 (which elevates the voltage to 5 v to Arduino, instead of 12v like the first). There is not any moving, even when just 1 servo is connected!!

The problem is simply that you have too much load for your batteries.

Battery voltage drops when you draw too much current (when the load is too heavy.)

Every voltage booster you add just makes the problem worse.

You need a battery that can deliver more current. More 18650 cells in parallel, or just a bigger battery.

The voltage to the Arduino can be lower, as well. You are boosting 3.7V to 10V, just to throw power away in reducing the 10V back down to 5V on the Arduino.

Boost the battery voltage to 5V, and power the Arduino over the 5V pin.

Power quality is a problem and servo motors are very demanding when there is any position error. You must have a very low ESR in your power source.

Voltage boosters are a poor solution for servo motors from batteries because the output impedance is inherently increased and both voltage boosters and motors demand huge surge currents starting up.

In biometrics all our muscles are push-pull with burst frequency and amplitude controlling the torque which is current in DC motors. But for Servo-motors current is proportional to the position error up to some limit.

I would choose a battery and motor from your design specs: e.g. 10% load regulation error worst case by design of the current control or overkill on the batteries.

Always start ANY design with better specs for V,I,R (& Zo,ESR,DCR) ,Pd, Ah and include tolerances.
Then choose parts a topology that you know will work.
Then choose the parts and verify assumptions.

If you wanted more power. Consider a BLDC gear motors rather than the cheap servo motor. But you must sense and control current for the acceleration ramp and position to be stable.

2
Voltage drop when servo activates
0
High-current motor on isolated circuit causing servos to move
0
Sharing same battery with two dc motors and two servos
0
Two different power sources with same voltage and current producing different results
1
How can i externally power 5 micro servos and one mg996r?
0
How to use 18650 batteries and increase voltage from 3.7v to 12v
0
Power servo with lipo battery with XL6009
1
Best way to provide 5V at a high current to power 12+ servos using battery power