Breakpoints, poles and zeros of a band reject filter

I'm reading a manual about op. amps. (op amps for everyone) which, at a certain point, speaks about poles and zeros. I'm trying to understand the following example:

the poles and zeros are supposed to be the following:

Corner frequencies are not the poles of the transfer function and hence you wouldn't get value of denominator equal to zero at those frequencies ,these frequencies in some books refer as pole or zeroes but actually they are not !

Poles and Zeroes of a transfer function is decided by real part of 'S' not by imaginary parts of S(i.e frequency part). But for bode plot we already assumed that $$Re[S] =0$$ and so concept of pole Zero doesn't make sense

If you plug that into the formula for G, in the denominator you will have

I have been looking at it an seen that, in a previous example of the same book, the 'poles' are calculated using the modulus of the gain. If that is the case, if

The above is wrong as some comments have pointed out. First, I have realized that the text I'm reading speaks about breakpoints and they seem to be called zeros/poles as well. Breakpoints are not supposed to be the roots of numerator and denominator respectively. Instead, they seem to be points where the slope of the gain changes its sign, see breakpoints. Therefore, all what I have done above is wrong because I was looking for roots when that is not what I should find.

Now, as far as I understand from the text, these breakpoints are located when each of the factors of numerator/denominator become \$\sqrt{2}\$ (not sure why) and for some reason this indicates when the slope changes sign.

In addition, it seems that when a breakpoint in the denominator changes changes the slope to negative, while one in the numerator changes it to positive. 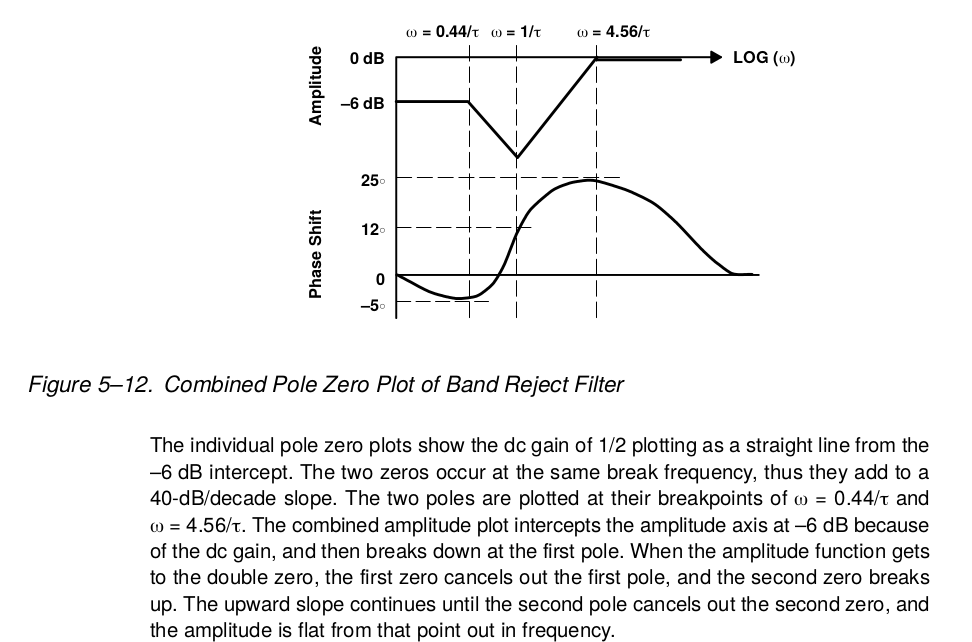 In addition, a breakpoint in the denominator changes the slope to flat if it was positive before, or to negative if it was flat before.

Not the answer you're looking for? Browse other questions tagged operational-amplifier filter transfer-function pole-zeroplot or ask your own question.

0
Convention for Transfer Function Poles and Zeros
0
Type of Filter from pole-zero plot
0
Non-resonant RLC band-pass filter
10
Meaning of zeros in transfer function
4
Finding Transfer Function, Poles, Zeros of an RC Circuit
3
What exactly is Pole Frequency in a Filter and how does it affect the frequency response?
0
Poles and Zeros of Two Pole Compensation
0
Zeros and poles in the following bode plot
4
Pole zero plot of band reject filter
0
Real/Complex Zeros for Filter Transfer Function