Why is my red LED dimmer without a resistor than with a 100 Ohm resistor?

Complete newb here; sorry this may be a basic question but trying to learn. I made a simple circuit with nothing except an Arduino power source a 100 Ohm resistor in series with a 10mm red LED. Weirdly it gets dimmer if I remove the resistor and my question is why is that occurring? I thought reducing resistors would brighten the LED. The datasheet is attached. The max current is 80mA and the LED worked fine after and this phenomena is repeatable so I don't think I burned the LED out. This phenomena doesn't happen if the power source is 3.3V in which case I don't notice much brightness difference between the two. This phenomena also doesn't occur with a same sized blue LED by the same manufacturer. FYI, there's no code, I am running the power direct from the Arduino Uno's 5V and 3.3V pin and gnd pin. I read the Sparkfun tutorial on resistors and am confused. 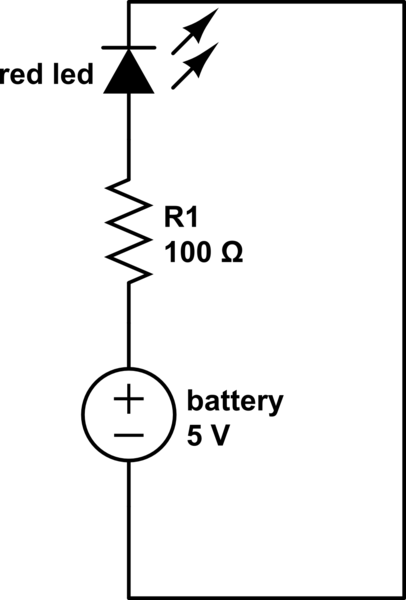 No resistor = way too much current

Way too much current = LED is running way too hot

When an LED gets too hot, it's ability to emit light goes down.

Touch it, bet it's really warm if not hot.

Another thing, when the temp of an LED changes, it's output wavelength changes. It gets longer. So your red LED may have shifted to infrared

Either way,, blue behaves differently because it has a higher voltage requirement than red. This is probably limiting the over current condition.

They behave similar at 3V instead of 5 because there is less difference compared to Vf, so they aren't getting as much over current.

Got an ammeter??? Measure the current you're putting through them.

0
LED Lighting with Arduino Mega 2560
8
Resistor heat in a LED array
2
Could somebody tell me which resistor to use with this LED
0
calculating red LED resistor arduino
0
Do I have a short? Why is my breadboard burning?
0
Resistor Values to switch a 100ma led with a on a 5v power supply with 2n3094a 3.5v base
1
Why is my LED flickering when it is connected to a variable resistor, and it's resistance is at the minimum value
0
Arduino and 3W LED sharing the same power source, is it possible and how?
9
Why are all my yellow 2V/20mA LEDs burning out with 330k Ohm resistor?
0
Connecting a LED between two 74HC595 without current limiting resistor