The conclusion I'm coming to at this point is that I believe the IC is damaged. My reasoning is that the device simply is not responding to the control input in a meaningful way. It turns driver/oscillator on when the control signal drops below 1.25 v, which is correct, then the inductor does its thing just fine and the output voltage starts to rise, but the IC leaves the "drive" running until the feedback input reaches about 1.5 v, which is far too high. Since the rise time for that input signal is in the region of 100 mS, it's not reasonable to attribute this to normal response latency.

I will say that this is my first foray into working with switching regulators, so I don't know what I don't know, but it's not my first foray into "feedback control systems" and this feels just flat out wrong to me. Anyway, I'm still open to other suggestions if anyone has one, but for the time being I shall put this on the shelf, design a PCB so that "layout issues" and long wires associated with breadboard may be reduced, and then I'll try again with a fresh chip.

The one thing that is still bugging me about this belief is that the point at which the IC turns off the oscillator/driver varies with inductance, and with input voltage. But I can't see any rhyme or reason to that. If that is suggestive, I'd love to know how/why!

I'm trying to build this step-up converter to generate 48 volts for phantom power to a microphone, and having difficulty making it stable. This is the circuit I started from. Note below a couple of changes:

I built (most of) the project on a breadboard, and it kinda-sorta works but the output varies by a total of 16 volts on a slow sawtooth. Let me fill in the gaps:

This is the input and output waveforms on the PP3 (Yellow-output, blue-input) 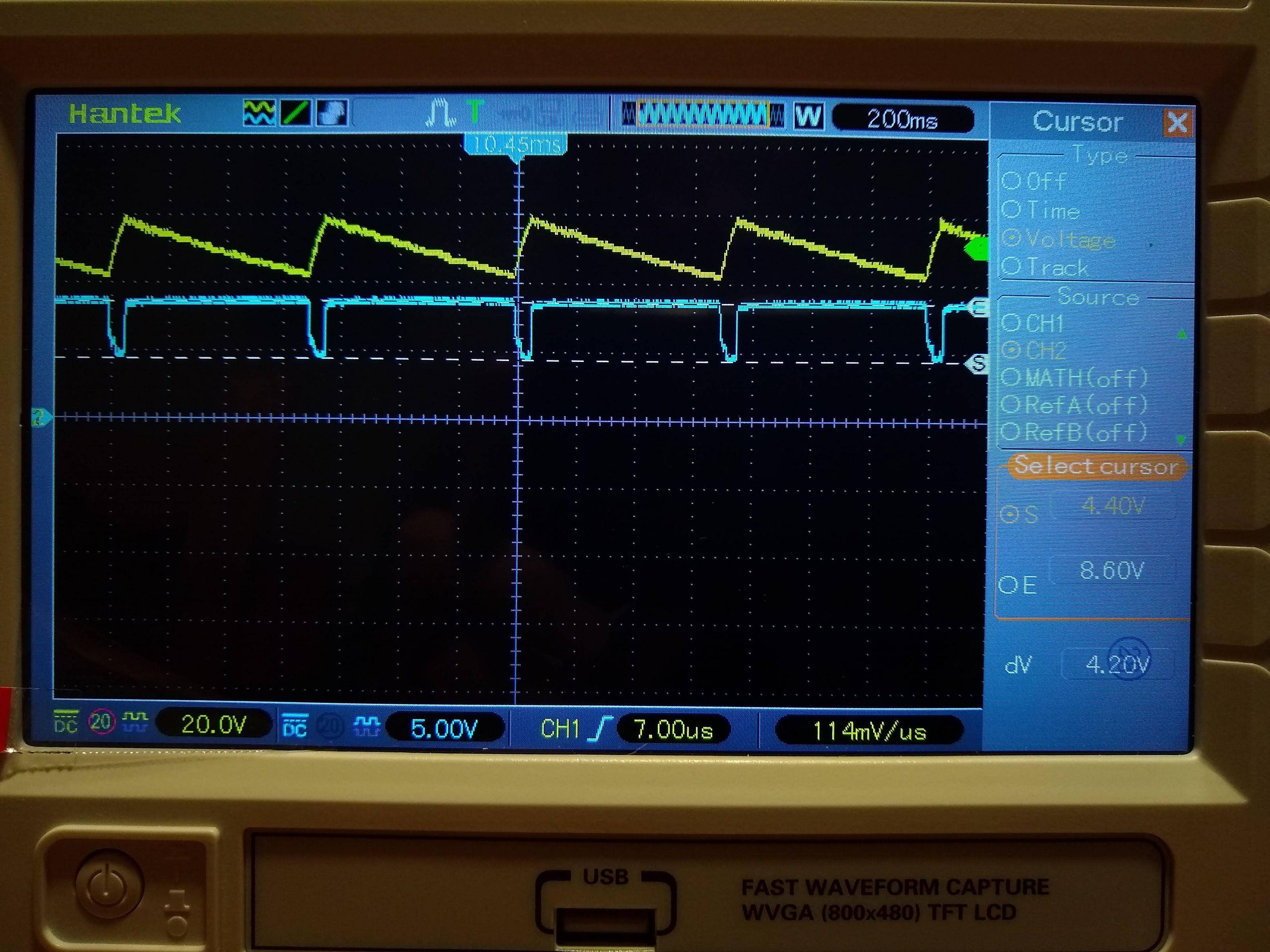 Notice it's bouncing around about 16 volts peak to peak at just under 2 Hz.

This (blue) is the signal at pin 2 (the feedback pin). It almost seems that the 2577 isn't responding properly as the swing here seems far wider than it should be, and yet the device doesn't seem to be changing from drive to idle or back when it should be. 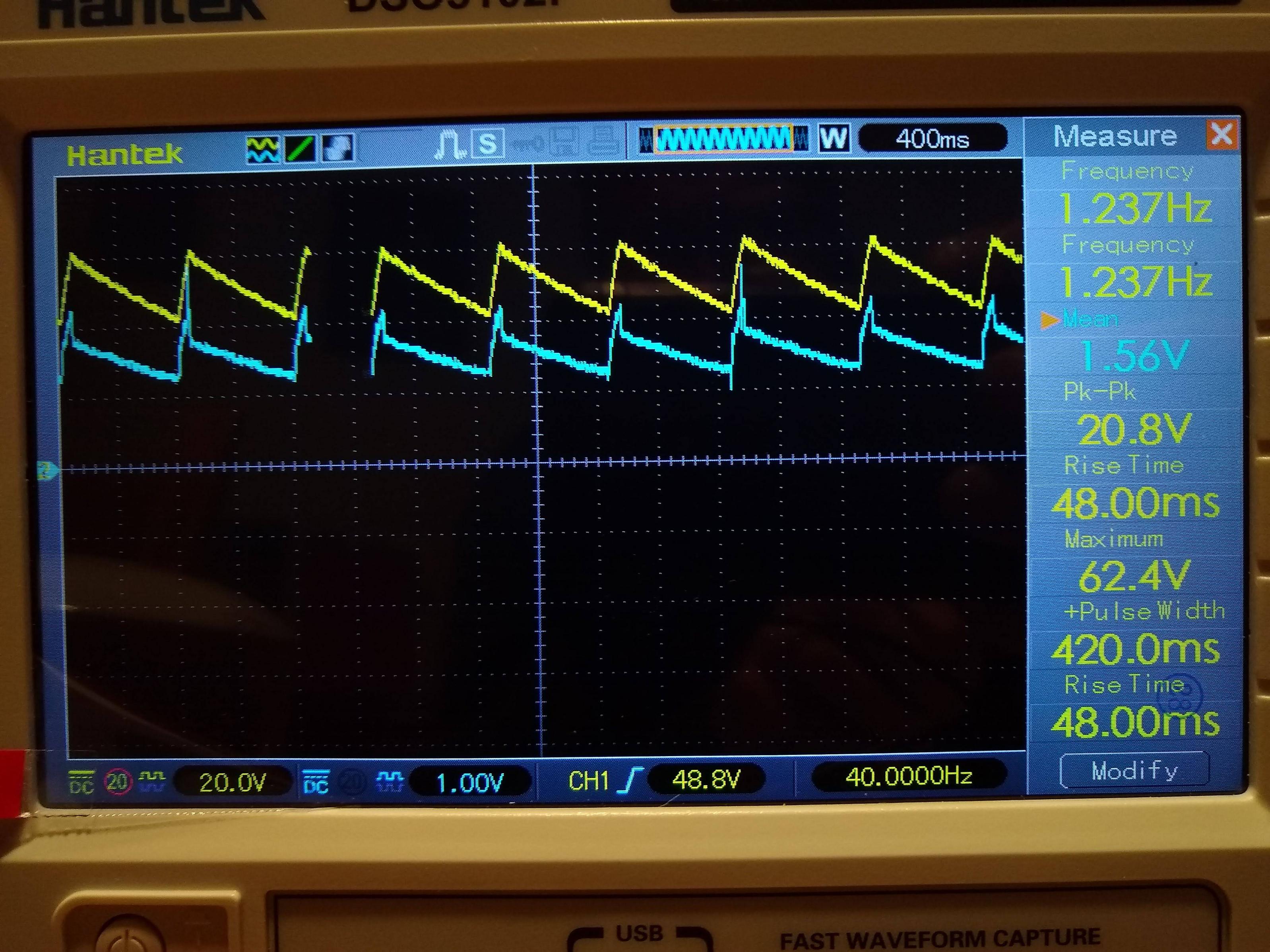 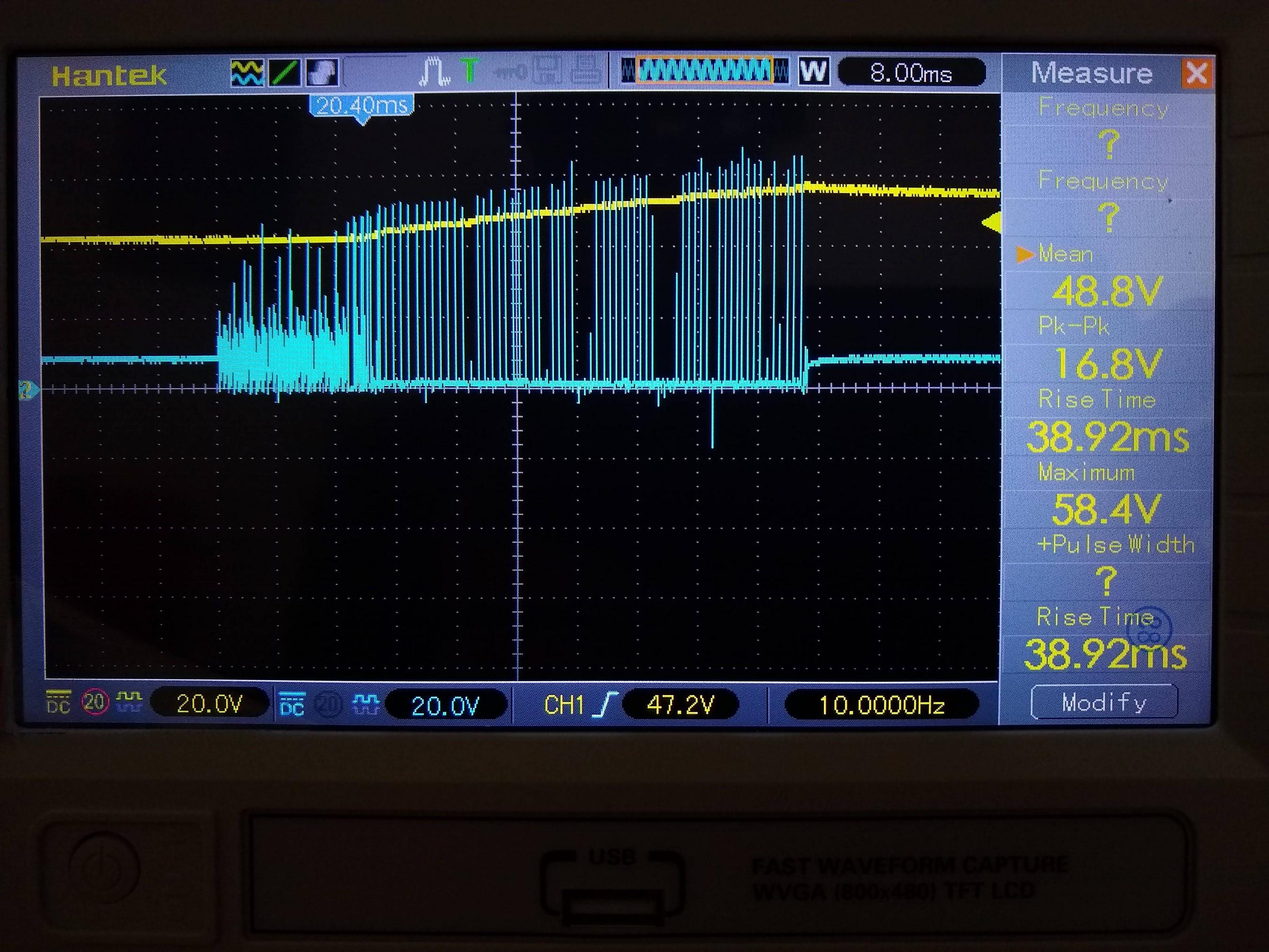 One note here is that the hysteresis is much better, but still grossly unacceptable at about 5 volts, when running off 12 v. I need this to run of a 9 v battery.

Breadboard layout is probably terrible, see below. Since current suggestions are that this matters and could be relevant, I think I shall have no choice but to put a PCB together before going much further. 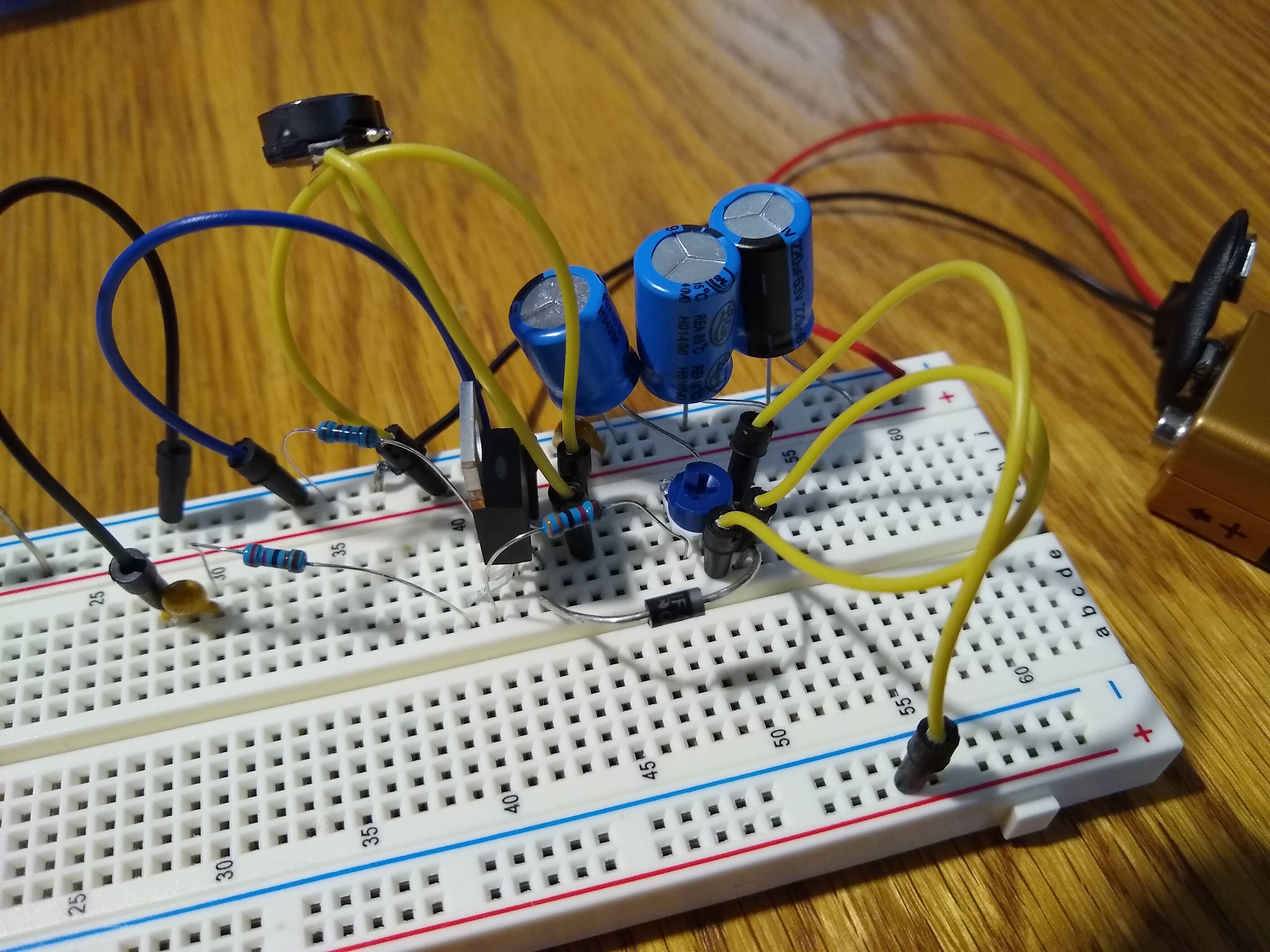 Update: I have changed the output capacitor, and the peak-peak voltage swing does not change, but the slope of the discharge behaves exactly as one would expect for a capacitor discharging (double the capacitance, double the "decay" time). Similarly, removing the load resistor increases the decay time pretty much as one would expect.

In the meantime, can anyone shed any more light, or make other suggestions that I might be able to ?

TIA for any input, Toby

The compensation network can affect stability:

Also, remember that keeping the feedback path long can cause some stability problems. Make sure VR1, R2, and R3 are placed close to the 2577 chip.

The LM1577 datasheet, on page 16, section B, contains an equation for the minimum inductance needed for stability of a boost regulator based upon that chip. The equation is

So, you need to increase your inductance to at least 200 uH. Since you want to run your circuit on minimal current, I would suggest even greater inductance, such as 1 mH, if you can do that.

Now, even though your inductance of 100 uH is below what is required, I am not sure that this is the only problem with your circuit. The 16 volt ripple at 2 Hz, suggests something else, though at the moment, I know not what. I would at least fix your inductance problem, and see where that gets you.

I have an idea forming: This device has "soft start", and it seems like there's a huge drop in the input power rail (looking at the scope trace, it's down to about 4.5 V which is the minimum input for this device). Is it possible that I'm triggering the soft start behavior every time that happens, so it always charges slowly?

Edit: It appears from your scope shot that the rise time of your output sawtooth is 48mSec. If C4, which is nominally 100uF charges 16V in 48mSec, that corresponds to an average 33mA that it is drawing. Since this is a boost converter from 9 or 12V to 48V, that means that the average current through your inductor during this time would be somewhere around 5 times that, or 150mA. The peak current could easily be twice that, or 300mA. Do you know the maximum current rating for your inductor?