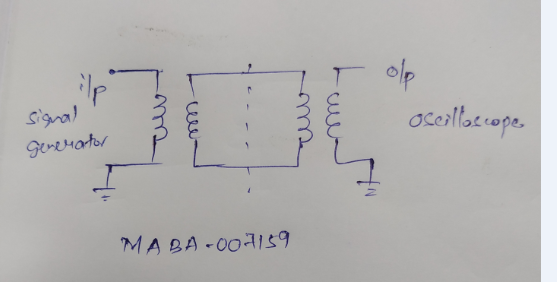 The Input is fed from function generator 5V sine signal, the output is connected to oscilloscope. The same input should be displayed at output. But the output was not in the expected way. The amplitudes are changing for different frequencies, the output amplitude gets distorted for lower frequencies (i.e, 50KHz) and gets amplified at high frequencies (10MHz) .

Now I swapped the input and output. same procedure was repeated , same observations were made.

can you please suggest any part numbers for achieving this application The circuit should work in bi-directional way i.e input should act as output also and output should act as input also i.e when data is fed at data+ and data-, this circuit should convert the signal to single ended , when input is O/P in first image then it should convert the single ended signal to differential signal. The frequency of signal is 32KHz and signal is -12 to +12V square wave.

Now, there is a fundamental issue in your methodology.

There are two magnetic elements: the first one is a CM choke, which is used to remove HF noise; the second one is you balun transformer (could be 1:1 or other winding ratio) which does the effective conversion.

That said, such a circuit is designed to work

I assume you want to measure the forward response of your magnetics; if you get even one of these three wrong, your measurement will be useless.

Using another transformer to convert your generator output to balanced is fine. However you need to first measure it to calibrate out the response.

Also, 10MHz is high enough that even the wiring on your bench will capacitive couple (giving a misleading measure).

As for the impedances, you are probably starting with a 50 ohm output from your generator, exiting with ? ohms from your balancing transformer (50 ohm if 1:1, obviously), and then entering your magnetics (and if doesn't match you're already screwed).

On the output, you have your magnetics' output impedance (which will be wrong if the input wasn't matched) and you are coupling it with the scope input. This is usually 10meg with some pF in parallel but it's shown in the probe manual. More often than not this would be not the impedance your magnetics expect as a load.

By the way in your second drawing I don't see the CM filter. I hope you just didn't just turn it around because it will never work that way.

Standard practice for these measurements would be to build a test fixture with some PI resistor networks to match the impedances (you lose a lot of dBs but who cares, at least you don't have reactances to mess your curves).