I am going through the following guide for op amps : http://web.mit.edu/6.101/www/reference/op_amps_everyone.pdf

On page 87 (screenshot attached) there is a bode plot which has got me slightly confused. I've usually seen two bode plots on such plots, one for open loop gain (starts of high and then has a roll off based on the pole zero configuration) and then the closed loop gain which the designer sets using passive components is usually (ideally) much lower than open loop and then intersects with the closed loop to form the bandwidth of your op amp circuit.

In this image they state the flat bit is set by the DC gain. What are they referring too? This isn't the closed loop gain right? Is this the difference between closed and open loop? But that isn't the circuit gain? Also why is the slope 20 log (Abeta)? If this was loop gain wouldn't it be 20 log (1 + Abeta) 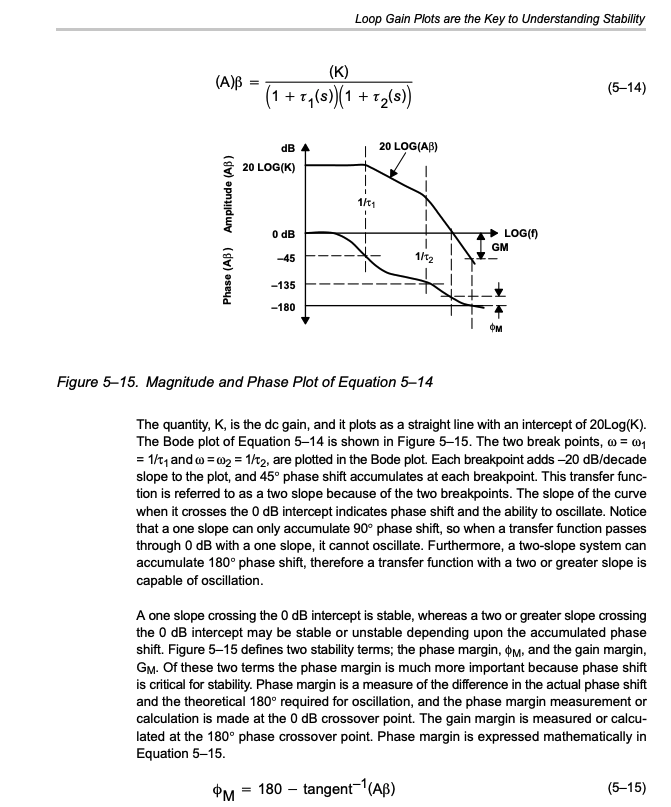 That Bode plot is a plot of magnitude and phase of loop gain, plotted in dB and degrees respectively.

The difference between open loop gain and closed loop gain (both plotted in dB) is equal to 1 plus the loop gain, 1 + (Aol x beta), where 1 + (beta x Aol) is known as the feedback factor.

Not the answer you're looking for? Browse other questions tagged operational-amplifier stability bode-plot closed-loop or ask your own question.