Parallel transistors for brightness control of large quantity of LEDs

I'm working on an art project that consists of ~180 LEDs with about a dozen fading/flashing PWM patterns, with each pattern group/circuit controlled by a PN2222A transistor on the cathode side, with the transistor bases' signals coming from a microcontroller.

I would like to be able to control the overall brightness of all LEDs simultaneously (not really possible via the microcontroller with how I've programmed it), so I had the idea to use a few leftover transistors connected in "parallel" on the anode side to create a PWM brightness controlling "main bus" for all LEDs. The PN2222A transistors I'm using are rated up to 2A, so I figured putting 2-3 in parallel would allow the control of the LEDs high current draw (~3.6A @20mA each): 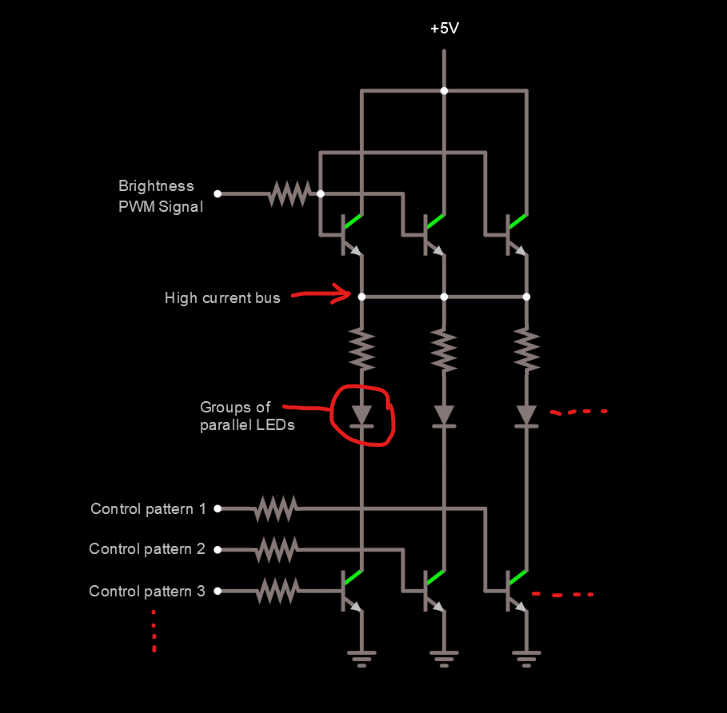 I'm wondering if this looks like a reasonable solution? Or is there some reason not to do this in favor of a better way? Thank you very much!

You have the transistors as emitter followers so they are going to drop a lot of voltage. In a comment you said you have series resistors for each LED that are not shown in the schematic (necessary). Okay, they've been added but via an edit so all the comments about them being missing look odd .

I suggest using a single P-channel logic-level MOSFET. Low = ON in this case.

Somthing like an AOD417 which comes in a relatively easy to handle package.

This is a bad idea in itself. First of all BJT are not really well suited to paralleling, since current will tend to go in only one of these.

Also your high-current bus transistors would be difficult to drive since they are not ground referenced: however that could work since you are driving one single led from +5V so the emitter voltage is low. Your low side BJT are working in common emitter but your high side would be common collector, it's quite different.

The simplest way is to not use an array of 2N2222 but simply a single big transistor. 180 leds at 10mA are really not a big problem to drive, just pick some TO220 package. Even better use a MOSFET, it's easier to drive from the MCU since it doesn't need as much as gate current. Use the part you find available, it's not really critical.

The other thing you could find is that LEDs doesn't really like to be put in parallel, you'll see many different brightnesses; it's really a manufacturing tolerance issue.

What is usually done for this kind of work is to have LED strings of many led in series (with white leds is not unusual to have supplies of more than 60V!) so that the current in each is the same (they will have the same brightness). That's quite a lot more complicated, however.

If you want to go that way many manufacturers do controller ICs for led strings, with PWM and often even blinking options. Just shop around

Bad idea. I won't go into why because others will but there is no need to do this in the first place.

Why can't you modify the program to PWM the LEDs for brightness control?

If it's because of the way you programmed the patterns and flashing and can no longer integrate them to inherently PWM as they flash the different patterns. You don't need to do it simultaneously (although it would be better).

Ad hoc solution is to slave your pattern control signals to a master brightnes PWM timer. Take the LED drive signals you place on the output pins of the MCU, but before placing them on the pins, logically AND the pattern control signal with the output signal from a PWM timer whose duty cycle controls brightness. And then place the result on the MCU output pin. As long as the brightness control PWM frequency is significantly higher than the pattern flashing the the small amounts of jitter won't be discernible to the human eye.

If you want to get fancy, you may also use multiple global brightness control PWM timer channels that are staggered so some LEDs are on while others are off during the high frqeuency brightness control pulsing which will help alleviate peaky currents. Since they are all on the same timer but different channels you can change the PWM duty cycle to change the brightness of different groups of LEDs independelty as well.

ALso, paralleling a bunch of LEDs and using a common current limiting resistors can cause problems. LEDs are not all perfectly identical and the ones with the lowest voltage drop will tend to divert current away from all the others through themselves if each does not have its own series resistor. The issue is almost identical to to why you shouldn't parallel BJTs without current balancing resistors.

Not the answer you're looking for? Browse other questions tagged transistors led pwm parallel or ask your own question.

6
How to calculate the tolerance of this constant current circuit?