How to connect four 18650 batteries to double voltage and capacity

Im trying to do a DIY RC car with uses two 6-12v motors as well as some LEDS, servos and Arduino components. I was planning on using four 3.7v 2600MAH 25A 18650 battery cells, two on series and two on parallel so as to end up with 7.4v 5200MAH. Im using this picture to use the batteries from this website. The thing is, would this work without problem 18650 cells? Do i need to add things between them or just simply add a 2S BMS (Battery Management System) to both the positive and negative? Thanks! 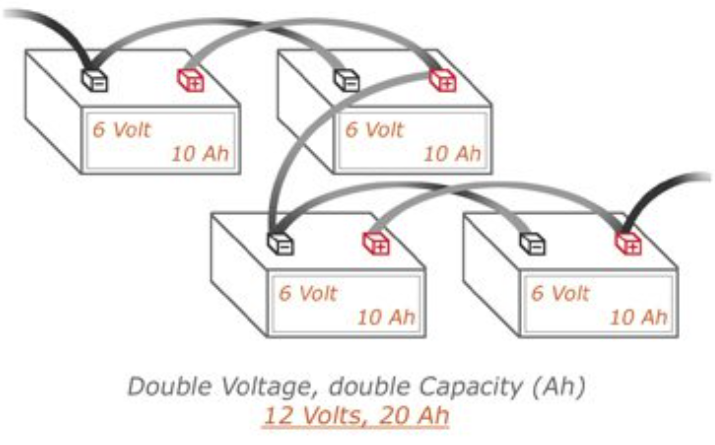 That series-parallel arrangment is legal but could give some issue since cells will not be discharged in the same way. It will works but you'll have less than 4 times the capacity, probably.

Usually is preferrable to put all the cells in series and step down from the resulting voltage with a converter; even in that case there are cell balancing issues at some point (and dedicated ICs to resolve them!)

As for the battery protector: each pack must have its one, they are not designed to protect multiple packs (unless they are redesigned accordingly). You do not want a lithium fire on the bench, I assure you.

Probably fine. Wiring details may matter if you discharge at a very high rate. Because each wire acts like a small resistor. If the resistance is not equal in all pathways then the cells may not share current equally during charge and discharge.

Also, don't connect batteries together in parallel unless and until you somehow get them both at the same voltage (by charging them or discharging them or connecting them together with a resistor for a long time or something).

Also also, if you don't plan to balance charge, then you should also manually balance all the cells before you put them together in a pack.

As far as putting something between the cells, I don't think that is typically done in small packs. Ideally you would put a fuse in series with each cell. Certainly for battery packs with many parallel cells this would be mandatory.

But this is usually not done in RC. In RC, people usually take precautions to make sure nobody gets hurt if/when a battery pack catches on fire. This is a different standard from consumer products which need to be much safer than that.

4
How to charge a 18650 battery pack with BMS
6
Diy 18650 4s battery pack [How to charge, how to build?]
0
Factors to be considered while replacing dead cells with a new 18650 Li-Ion cell in a Laptop
0
How to use 18650 batteries and increase voltage from 3.7v to 12v
1
Are parallel wired BMS controlled batteries even necessary?