I'm attempting to read an air temp. sensor made by Amphenol (Datasheet). The sensor outputs is pulse density modulated (PDM) and is filtered to DC using a simple LPF as suggested by the manufactorer. Testing the output after the filter using a scope looks great with neglectible ripple for my need.

My ADC input circuit is loading the output, probably because the impedance is too low, so the voltages I see are skewed. I've managed to correct them using a 2nd order equation and now I am usually withinin 1 degree of the theoretical (expected) temp. reading.

Here is the strange part - in a certain range in the middle of the sensor's range I get a "hump" where readings will stop responding linearily and act like a parabole with max. point. After the edges of this area, the behaviour goes back to linear again.

I am puzzled what is skewing the readings exactly in that range. I can undertand that due to capacitors and loading the ADC input circuit is affecting the whole range, but what affects just a part of it?

Here is a circuit of the sensor + fitler + ADC input. R1 + C1 make up the LPF. R2 + R3 + C2 make up a voltage divider at the ADC's input. The ADC's input resistance is now shows but according to the MCU datasheet it is max 50kOhm.

The sensor's output after the filter is expected to be perfectly linear. Just thught to make that clear.

Worth mentioning that I have repeated this experiment 3 times using different sensors, different filters and different input channels of the MCU's ADC (although they are multiplexed, but still to rule out a damaged MUX). I have seen the exact same thing each time with minimal diff. between the sensors.

There might be additional information missing here, so please let me know and I will add as requested.

Update #1 X axis are ADC raw readings (basically mV at R2 & R3 junction), Y axis is the expected mV reading from the sensor at the temp. that was meassured using an external thermomether. According to the equation from Amphenol / Telaire this should be linear. 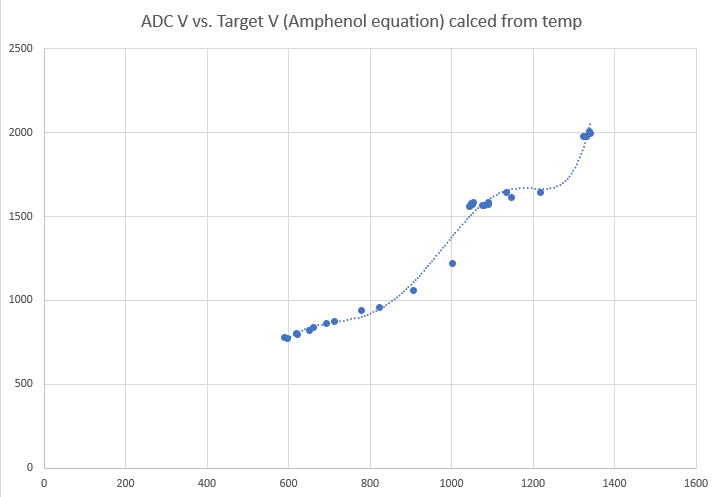 Unbuffered SAR ADCs present a loading that is dependent on sample rate (to somewhere mid-scale typically, rather than to ground as is usually shown in simplified diagrams), and your high impedance source affects the acquisition time. It's easiest to have a simple op-amp buffer, but sometimes you can get away without it.

This brief TI "technote" describes some of the considerations in connecting a sensor directly without a driver. Your ADC and circuit may or may not have the flexibility to implement their suggestions. 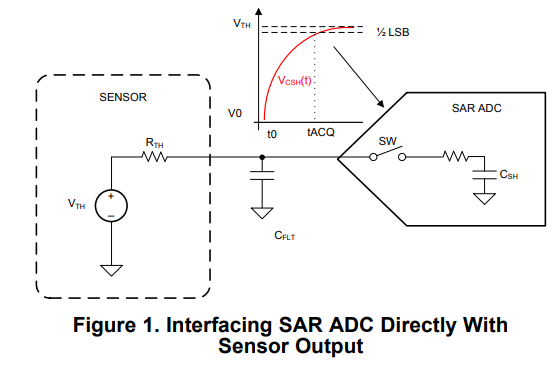 In general, decrease your sample rate and sample clock frequency to the minimum acceptable to both reduce the average loading and increase the acquisition time for the internal ADC capacitor to charge to close to the input voltage.

Or use the I2C and avoid touching all the analog stuff entirely, as others have suggested.

First of all, commenters rightly suggested to use I2C; if it's available it should the best way to read that sensor.

Let's assume you want to use the PDM output:

Now, for the biggest thing: ADC input impedance is one thing, but the circuit ouput impedance matters, too, especially with these pulsed circuits.

First of all 50kOhm of input is not really a great thing. From the transducer output impedance you have (assuming and ideal PDM transmitter) about 20kOhm on the high side paralleled to 10kOhm on the low side.

This is an effective output impedance of less than 5kOhm that propably will influence your reading.

You didn't specify the kind of ADC you are using but, assuming the usual charge redistribution SAR inside the chip you will have some multiplex switching resistor, some leakage and at the end about 10pF (usually less) of sampling capacitor. You will find the equivalent schematic in your datasheet.

Now the idea is that your signal will have to flow from you output (in this case C2, supplemented by the current trickling from the sensor), thru the multiplexer inside the ADC and charge the sampling capacitor exactly to the same voltage.

The required time is called input settling time and depends on how much bits you need: you are transferring charge between capacitors so initially it will be fast and then it will slow down.

This has to happen during the sampling time of your converter; if output impedance isn't low enough the sampling capacitor will not match the signal level and you'll see mismatches.

If your converter has an adjustable sampling time try to raise it and see if it goes better. The usual solution in this time would be simply a buffer amplifier before the converter (but be wary of offset errors).

MCU integrated converter are often susceptible to these issue because they are simply… cheap converters:P

Not the answer you're looking for? Browse other questions tagged adc filter impedance or ask your own question.

2
Need help calibrating ADC input using a voltage divider
6
DAC to ADC errors
0
Dynamic range of voltages for ADC input controlled by software
1
Maximum Allowable Noise of ADC Input Signal
1
Photodiode to an ADC
2
esp32-wrover ADC, incorrect values?
1
Why the ADC conversion causes the analog input pin of PIC to be grounded at the beginning of the conversion?
0
Measuring battery with low power requirement
0
Can I avoid buffering an analog sensor to ADC if I don't know its output impedance?