I am working on a circuit that transmits ~1MHz sine wave(20V amplitude) in RLC based circuit scheme, also transmits high-frequency signals(pulses(non-periodic)) ~20MHz(10 %DS)(20V) in a CR-based circuit scheme. The circuit involves 'disabling' of inductor for ~20MHz signal transmission for a short amount of time(say 10% of the enabled time). I'm having problems in suppressing the voltage spikes(~ +-100 V) which are generated the moment I disable the inductor AND after I connect the wire, while the rest of the time the circuit behaves alright. NOTE: I'm measuring the differential voltage across Resistor(275ohm)

So, to tackle that, I came up with an idea to temporarily enable the pair of opposite Zener diodes which would act as a voltage limiter(say +-20V) right after the switch S1, but it found to be unsuccessful. I can still see the surges. Also, I've read that Zener has high capacitance, so it won't be effective in a high speed temporarily switching(Note that I want to enable the voltage suppression device momentarily for the initial surge protection(~10ns)) 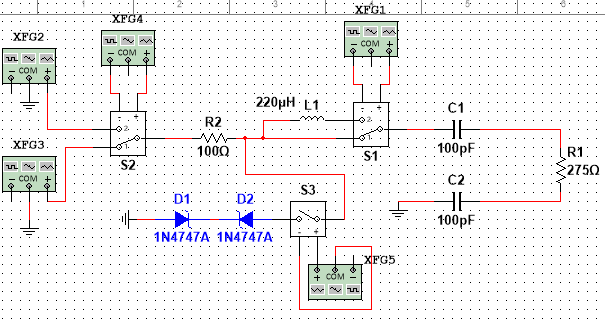 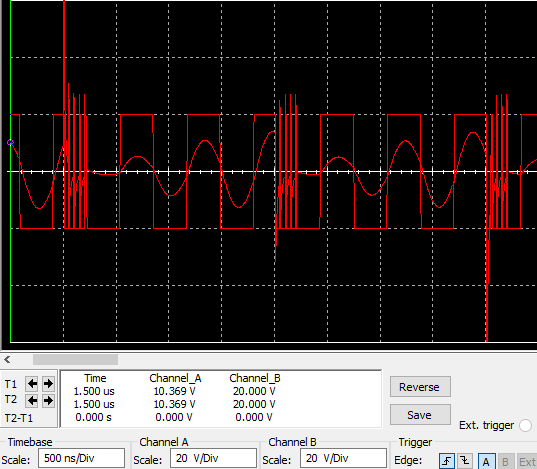 I also have an idea to make my switch kind of a hybrid-relay based, where there will be a state for a very short period of time (just after inductor open-circuit and before connecting the wire) to absorb the surges. But, I'm not getting effective ideas.

I also have heard about MOVs. But I'm not sure about its effectiveness as they also possess capacitance. It's not available in NI Multisim, so I am not sure if it's good.

I need some suggestions/ways to tackle the problem. NOTE: C1 capacitor is an instrument that is very delicate and it's a must to suppress any kind of spike just before it

Have you tried something like this configuration:
When S1 is bypassing L1, SW3 is closed.
When S1 is in series with L1, SW3 is open.

simulate this circuit – Schematic created using CircuitLab
It should quickly quelch any energy in the inductor, and keep it local to that loop.

Not the answer you're looking for? Browse other questions tagged circuit-analysis switches passive-networks circuit-protection surge-protection or ask your own question.

2
RC Circuit response to different input voltages
0
Resonance factor of RLC circuit
1
Measuring the resonant frequency of an RLC circuit
1
Damped RLC Circuit Equation
3
How to protect againt surges if working and maximum voltage are too close
0
How to calculate the gain of a RLC tank filter?
2
Solving for initial current for an RLC circuit with step voltage source
10
The Intuition for RLC circuits
0
Negative Freqs from FFT in Laplace Circuit Analysis