I want to make a cockpit voice recorder for small GA planes. Typically the headphones of such aircraft are stereo, e.g. left is coming from the radio (ATC), and right is the in-cabin intercom. I want to record both channels. My device will be powered from the aircraft's 12- or 24- volt power, so it will share grounds with the aircraft's systems. Being a big/unknown system, I'm worried whether the headphones' return signal is also the same GND. It's tempting to assume it is and connect it to my circuit's GND, but if it's not, then I'll be creating a short. Even if it's the same, I'll be creating a ground loop.

I'm not sure what to do about it. The best I can think of is to introduce an isolation transformer for the audio, like that: 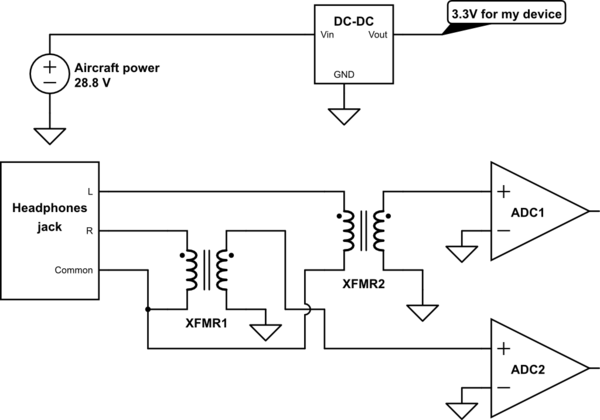 Is this enough to ensure the audio will come in clean and undistorted, and the ground loops/shorts avoided?

The other solution is to use an isolated DC-DC converter.

Realistically, of course, the circuit will be more complicated than this, as I won't be replacing the headphones; I'll be just tapping into their signal (a T-shaped joint). I'm not sure how the audio system in the plane will feel about driving two circuits instead of just one, but I guess it would be fine.

Of course, I know adding this kind of modifications to a crucial aircraft system is very dangerous, and we'll of course do thorough ground tests before flying with that. Part of the reason to ask the question is the fact there's no room for error, and I want to design the system properly upfront.

If you want to stay absolutely safe, your interface between the recording device and the aircraft's electrical system must ensure that the connection of your device does not alter the normal operation of the avionic system.
The problem can be broken down into these points:

The last point is trivial and I assume that the power consumed by the entire recorder is really low and that the aircraft's DC bus can deliver it without any problems.

The first point (EMC), it is perhaps the most critical part also because if a device is not EMC compliant it cannot be used and sold (here a summary of the legals proceedings about non-compliant device caught on the market). But apart from that, for a safety issue, you must be sure that the noise emitted by the recorder does not bother the aircraft and that the noise emitted by the aircraft does not bother the recorder (which is the sense of EMC).

Taking into account points 1 and 2, the architecture I would use is the one in the schematic below. 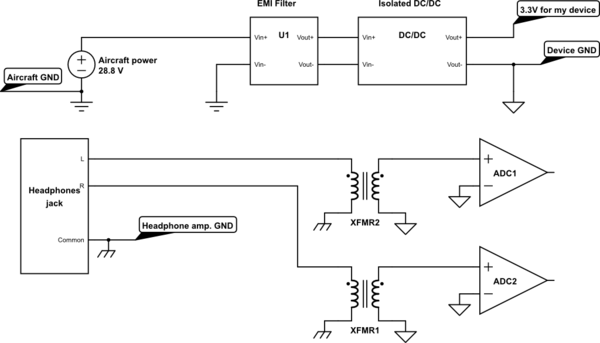 Since most headphone outputs need to drive headphones of various impedance, they often have a quite low output impedance. 4 Ohm or less is typical for output impedance on a phones jack. This should allow you to add any high input impedance audio amplifier into the circuit in parallel with you headphones without any worries about overloading the output. Having said that, I'm a bit doubtful that a cockpit intercom follows any consumer audio conventions. I would recommend having a look at the signals with an oscilloscope before designing any circuits. Isolation is going to be important, and you'll also want to scale the signal to match your analog conversion input. depending on your flavor of ADC, you might need some signal amplification in order to get the maximum dynamic range out of it. If the phones output follows typical Line-Out conventions, the signal will typically be below 1.2V P-P at it's loudest (your pain threshold). There is a guy that already makes the device you probably want. Here is a link - https://www.crazedpilot.com/audio-recording-cable-for-your-iphone/ This device has a 3.5mm TRRS output plug. I'm not sure about any isolation that they have implemented (or not) since they likely assume you will be plugged into a battery operated device that is fully isolated. Might be worth a look though.

Your circuit definitely has the potential for ground loop.

I had the exact same problem with a car Bluetooth receiver that was connected between the 12VDC power of the car and the AUX of the audio unit.

This resulted in a horrible noisy output. To fix the issue, I simply added an isolated DC/DC converter for the power supply.

In your circuit, despite the isolation transformer, both sides are still connected to the ground, thus creating a ground loop between the aux and the power input.

You have a very high chance to get noise in your headphones with a ground loop, but it can depend on how the cockpit electronics are implemented so the effect might be from unnoticeable to major.

The best solution in this situation is to isolate the power input as you can keep the audio input. There are a lot of cheap DC/DC converters that are isolated and for 2-3$ you do not need to worry about the rest, so then you only have a ground point which is the audio input.

If your cockpit power output is 12VDC, you can simple use an isolated 12V to 12V DC/DC without changing anything else. Make sure the input and output ground of the DC/DC are not connected.

Not the answer you're looking for? Browse other questions tagged safety isolation groundloops or ask your own question.

39
What is / how can I get a student-safe power supply for electronics projects?
1
Dirt cheap 3-12v DC/DC isolatior chip?
25
How much current can Solderless Breadboards handle?
6
Properly grounding 2 MCUs using I2C
1
How to live with noise and ground loops in a system with Electronics, Power Electronics, Electrical Machines, Three-phase power and several boards?
0
Designer circuit using optocoupler
1
Do I have adequate crosstalk and ground loop preventions in place?
6
Is it ever bad to run an IC VCC trace next to a ground plane with 1mm clearance?
0
Should I use a differential mode amplifier for mixing up to four stereo signals together?