I am designing a small handheld electronic screwdriver for a university project. The motor in this screwdriver requires a torque limiter to stop it stripping screws out of plastic parts and i am currently looking to use an LM338 to do this, hoping to use as few components as possible to keep size and complexity down (atleast for V1).

I was going to do it similar to the specification sheet as seen here: 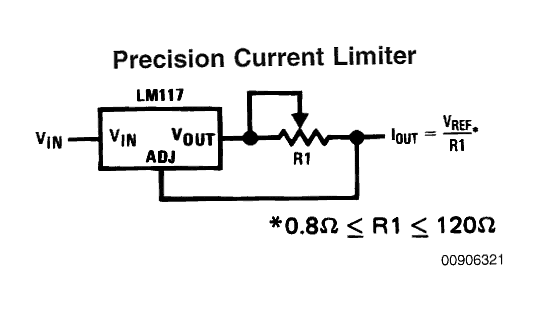 However, this clearly has some issues! 1, my motor can pull 1.45A of current and my small 100ohm potentiometers can not and 2, this also creates a varing potential divider between the LM388 and the motor, slowing the motor down. I just want the motor to be torque limited, not speed limited.

However I have not been able to get this working using R1 - 1k ohm, R2 10ohm. The 1km was calulated as shown here: 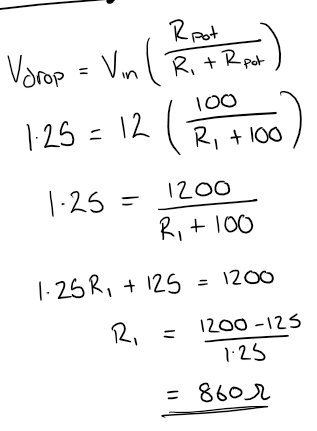 The 10 ohm is just to prevent shorts and therefore small.

Would anyone be able to give me a hand who has experience with this?

The only other info should probably mention is the motor, which is this:

and has a static resistance of 9ohms (I think).

The datasheet for the LM388 is here:

I don't see any way your second circuit would limit the current. Without a current shunt or some other sensor it has no way to know what current is even being drawn.

The first thing to note is that this is a linear regulator, so this circuit is going to be very inefficient.

The second note is that because the LM338 requires a very large 1.25V feedback voltage, the current shunt is going to waste a lot of power at all times.

That being said, here's a topology that might work: 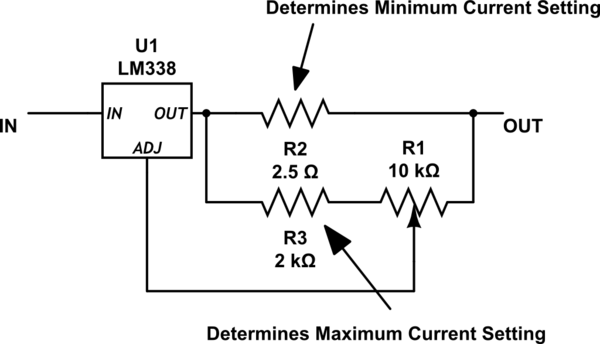 Important facts from the datasheet:

For current regulation applications, a single resistor whose resistance value is 1.25V/IO and power rating is greater than 1.25V^2/R must be used.

The the low end of the current range would be determined by the series resistor. 2.5R for example would result in a 500mA limit. The resistor divider R1 can reduce this feedback voltage to increase the current. R3 ensures that there's an upper limit. In this case approximately 3A.

One major downside is that R2 is going to need to dissipate a lot of power at the high current setting, up to 20W in this example!

The switches represent a rotary switch where only one can be closed at a time (or a similar arrangement. Effectively turning the switch changes the shunt resistor and therefore the maximum current. It doesn't provide infinite adjustment, but it's simple and it wastes much less power at high current settings then the other solution.

Note that these diagrams don't include caps or protection diodes and such which may be needed.

Drew circuits are perfectly fine; the real issue is using a linear regulator to drive a brushed motor; it's quite inefficient.

If you look just a little you'll see that there are many DC motor driver with current limiting as a feature (they usually do cycle-by-cycle PWM for that), and usually even inversion (for a screwdriver it's useful). Use an evaluation board for your prototype (they are sold exactly for that)

Not the answer you're looking for? Browse other questions tagged dc-motor lm317 or ask your own question.

2
Which electro motor to use for steering a kite? (guestimation marathon)
8
Limiting current for a DC motor
4
LM317 based power supply with current limiting
1
lm317 current source
0
LM317 lower voltage limiting
3
Why is my DC motor losing torque when over voltaged
1
Changing speed on DC motor with LM317?
3
Why isn't my 5-to-24VDC boost converter supplying enough current to turn a 24 VDC motor?
2
Can this 19.5 V/3.33 A/65 W laptop charger power this 12 V/45(maybe) W motor?