I am trying to design a circuit to switch 12V 90mA on/off using an Arduino Nano as the trigger.

Is there an optocoupler/transistor/MOSFET that can tolerate 12V at 100mA on the load side while still being switched by 5V from the Arduino Nano without overtaxing the nano?

I've tried a FQP30N06L MOSFET but the connection between the [S]ource and [D]rain pins allows enough voltage/current to flow when the MOSFET is in LOW state to keep that 12V circuit closed enough to run the load device. I added a resistor between Source and Drain to lower that voltage to zero in Low state but that also has the affect of dropping the 12V output to 11V when the MOSFET is switched HIGH.

Any advice would be great. I've been beating searching Google and SE for a few days trying to solve this.

The Load is an OBD2 reader for car diagnostics. Model: LAUNCH Creader 3001 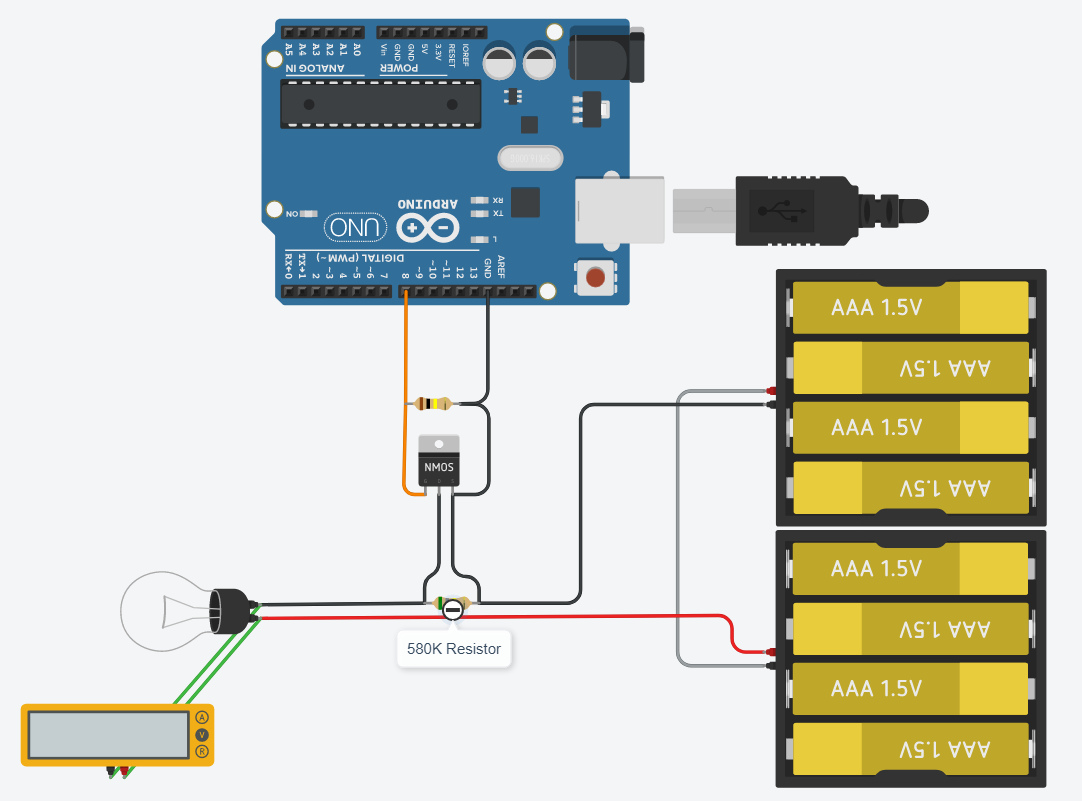 I ended up using a HE3621A0510 reed relay to switch the ground of the OBD2 reader on and off. It worked great. Unfortunately now the reed relay stays closed when the Arduino trigger power is removed, until I tap the relay. Then the circuit opens again and shuts the OBD2 reader off.

Though the measured load current of the OBD2 reader (90mA - mind you this was measured with a digital multimeter) was far less than the the reed relay capacity (500mA), I feel there must be a spike in the current at startup high enough to weld the relay contacts a little. I have tried multiple reed relays of the same model number and they all do this, so it shouldn't be just a single defective unit.

Any chance a resistor in line with the load could help keep that inrush down or should I use a fly-back diode to stop it entirely?

Your circuit should work. I suspect that pin 8 is not set up as a real output (push-pull). That would explain the problems you are seeing.

To check this you can temporarily add a 1k pull up resistor from 3.3v to the drain when pin 8 is supposed to be low. If it doesn't stay really close to 0V then it would confirm it is set up as a open drain output and will not be able to drive pin 8 low.

You definitely don't want a resistor across the drain and source.

If you get it working right you won't need the other resistor either.

This arrangement will work better when doing low side switching of a load. It is not good practice to drive a capacitive load directly, you should use a series resistor. This prevents the current spike on the DIO pin while charging and discharging the gate. A 1K should be fine there as this will limit that spike to a few milliamps. 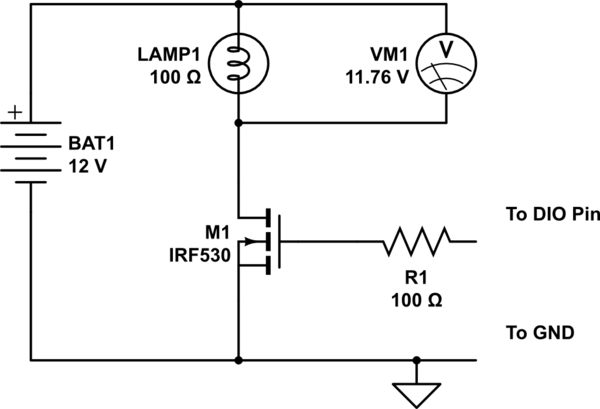 There is one other potential problem. The OBDII reader is likely able to be powered either from batteries or by the OBDII port. Most readers only use the batteries so you can unplug the reader and still read the codes that you have previously downloaded from the port without being attached to the car. If you are breaking into the power pins on the reader to control it's power, you may need to do high side switching with a P-Channel MOSFET instead of doing low side switching with the N-Channel.

Not the answer you're looking for? Browse other questions tagged arduino switching 12v or ask your own question.

5
Wiring an illuminated toggle switch
0
A switching mechanism which when fails should fail open to cut off the power to the load
1
Microcontroller GPIO status when switched off ? Can current flow from internally in microcontroller from one gpio to other gpios when switched off?
0
High-Power Switching using MOSFETs
2
Simplest way to switch inductive load with arduino?
0
relay switching troubles
0
Input matrix with reed switches
0
Can I turn on a 12V relay with 5V supply, just by changing a resistor?
1
Switching 3.3V 150mA efficiently