I'm reading a book (see figure 5-12) about (among other things) pole zero plots and there is an example I don't understand. For the schematics and formula below: 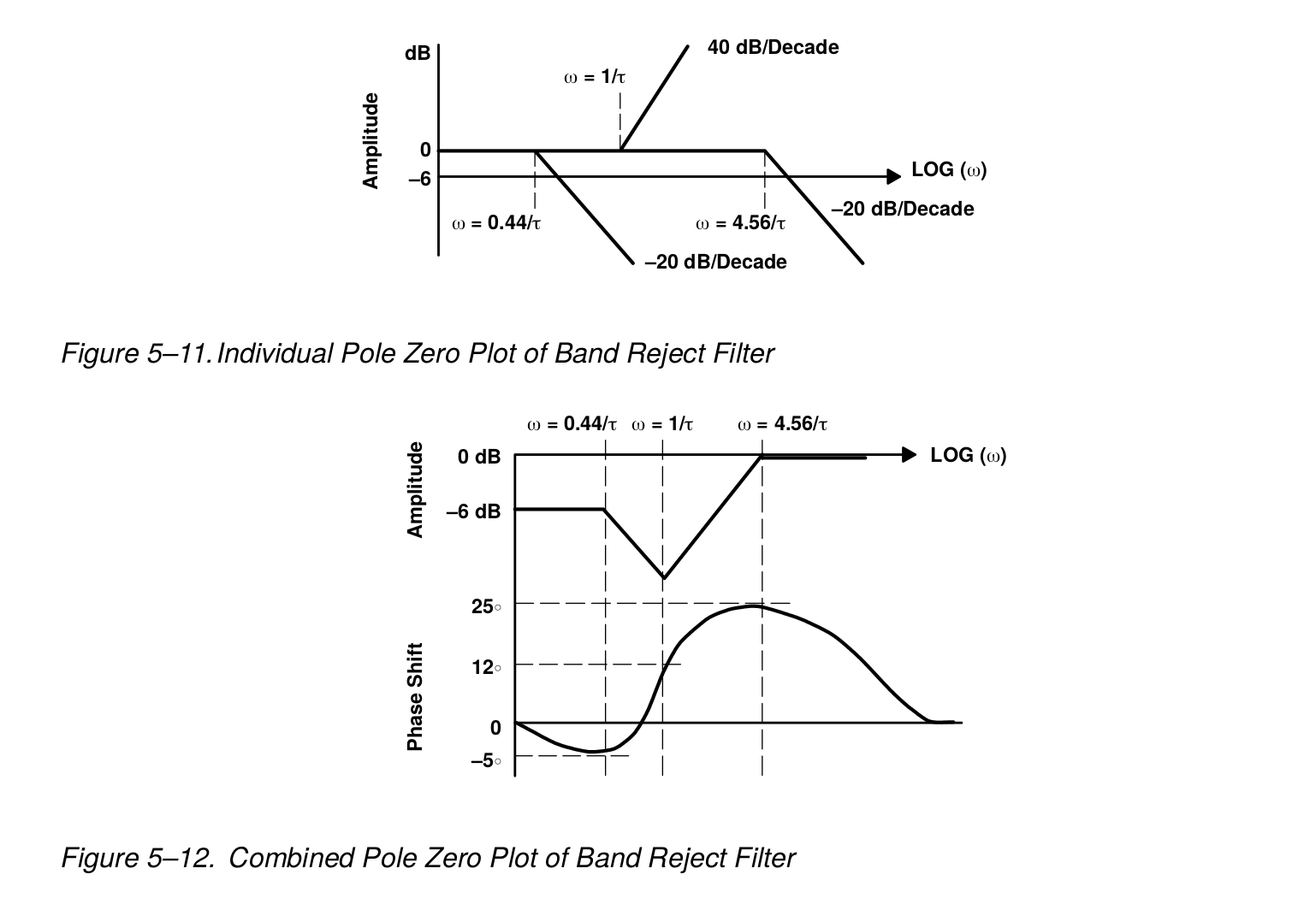 The individual pole zero plots show the dc gain of 1/2 plotting as a straight line from the –6 dB intercept. The two zeros occur at the same break frequency, thus they add to a 40-dB/decade slope. The two poles are plotted at their breakpoints of ω = 0.44/τ and ω = 4.56/τ. The combined amplitude plot intercepts the amplitude axis at –6 dB because of the dc gain, and then breaks down at the first pole.

I have noticed this:

[...] The combined amplitude plot intercepts the amplitude axis at –6 dB because of the dc gain, and then breaks down at the first pole.

Figure 5-11 shows 4 different bode plots in the same diagram - one for each factor. I.e. one for x½, two for the two poles in the denominator, and one for the double zero in the nominator. The latter has slope of 40dB/dec which actually is the same as two single zeros added up.

Figure 5-12 shows the sum of all the these individual plots. It's the sum - because in logarithmic scale summing correspond to multiplication as seen in equation 5-10. There, all the 4 frequency dependent factors (poles and zeros) are multiplied together. And you may only multiply each factor once - of course. The same goes for the ½ which is the same as: only add -6dB once.

Note however that there is a minor peculiarity in the figure. It should have been drawn like this:

It is customary to draw the x-axis with Y=0 as the x-axis. Maybe this explains your confusion

For readers who would like to determine the transfer function of this filter but also for the sake of a simple personal exercise, I have applied the fast analytical circuit techniques or FACTs described in my last book. The principle is simple and consists of determining the time constants of this 2nd-order circuit in two conditions: when the excitation is zeroed (the input source is replaced by a short circuit) and when the output is a null (no ac response) despite the excitation being back in place.

We start with \$s=0\$ and open-circuit all capacitors, exactly as SPICE does when determining a dc operating point. When you do this, the circuit becomes a simple resistive divider and if all resistors are equal, the gain is 0.5 or -6 dB. Then you carry as shown in the below drawings: 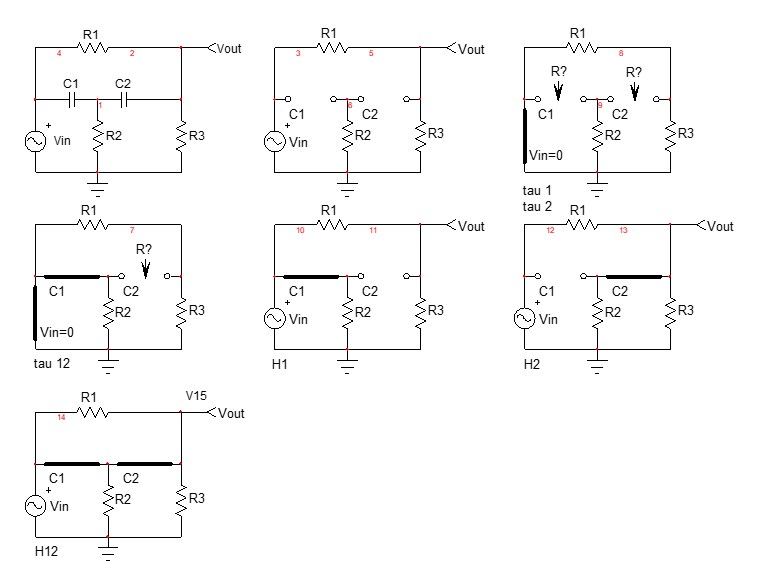 What is cool is that you determine all time constants by inspection without the need to resort to algebra: less mistakes and you can easily come back to a faulty sketch and fix it individually leaving the rest intact. If all goes well, you have the following expressions: 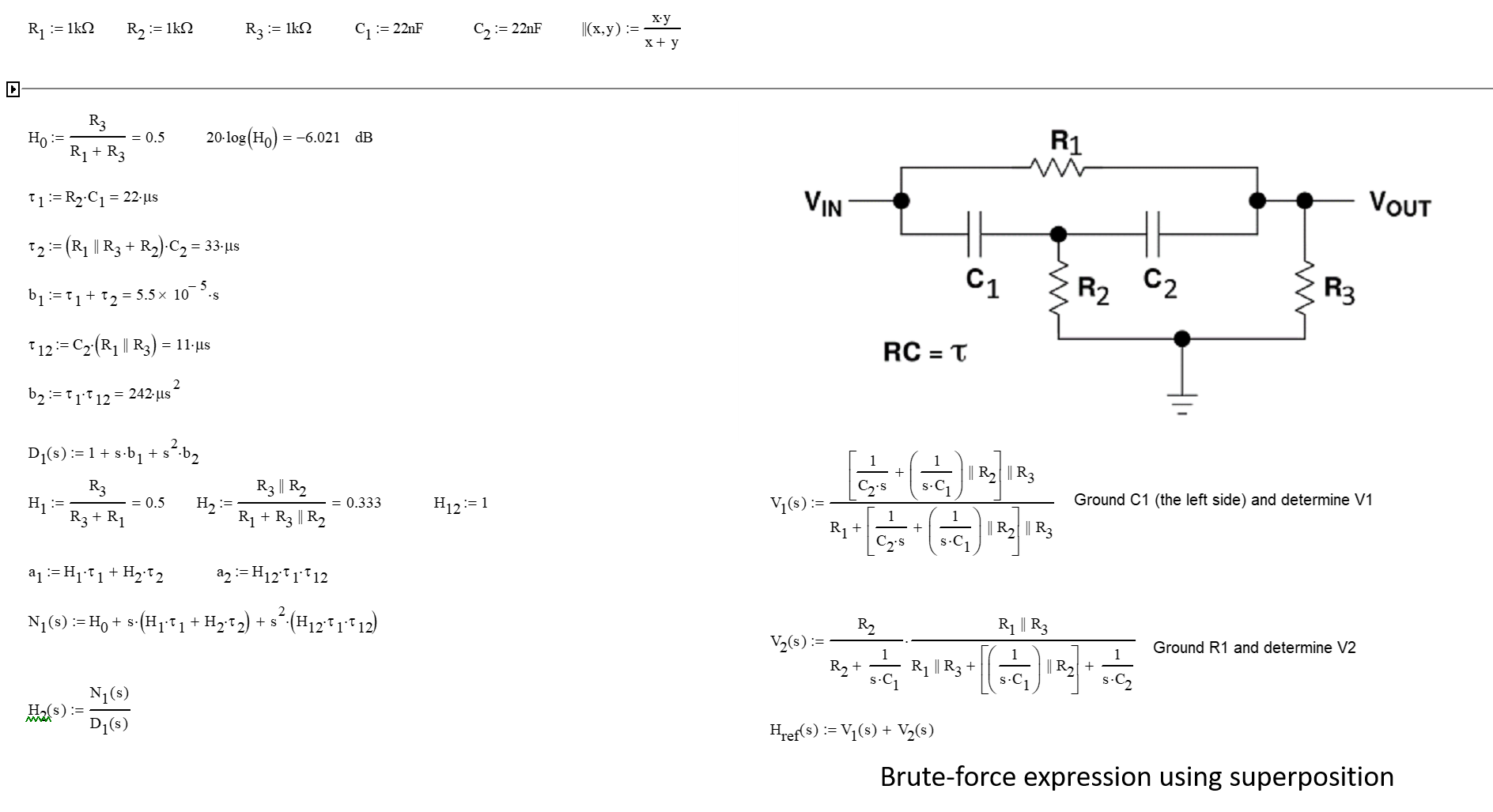 I have derived the expression with different values for the resistors and capacitors but if you consider all resistances equal to \$R\$ and the capacitors equal to \$C\$, then you can simplify the expression and factor the denominator as the product of two separated poles after solving a simple two-unknown equation and confirm the coefficients given in the text: 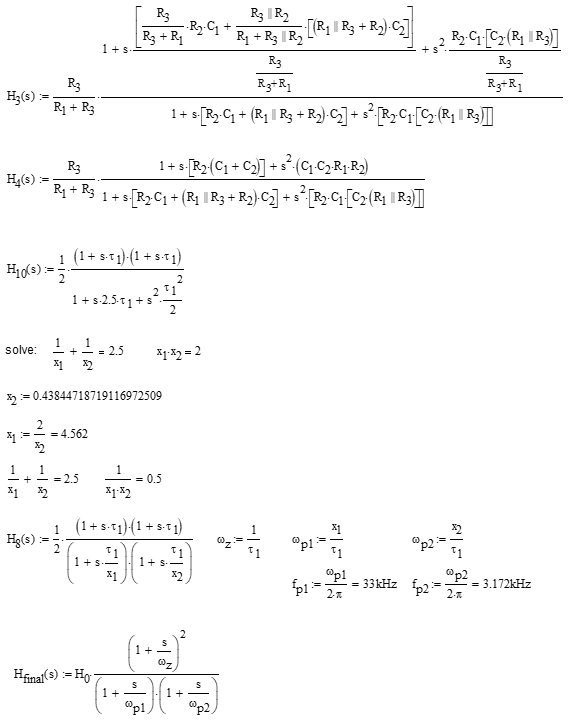 We can now plot and compare the reference response given by the brute-force approach and that of the FACTs. As you can see, they are rigorously identical:

Not the answer you're looking for? Browse other questions tagged operational-amplifier control-system gain bode-plot or ask your own question.

4
Pole-zero cancellation Paradox
0
Obtaining stability information from Bode plots
0
MATLAB: Pole at 0.1 rad/s contributing to nothing on the Bode Plot - Why?
0
A confusion about a transfer function's Bode plot and s domain view
4
Pole zero plot of band reject filter
1
Why is the slope of the op amp graph 20 log (AB) in this application note
0
Unstable system in s-plane but stable on bode plot?
0
Q: How to read this bode plot to find transfer function?