I'm having a problem understanding of how can a current be injected into emitter and pulled into collector via base, using only current sources at emitters and collectors of differential pair and not applying and base voltage directly (like shown in the schematic below). 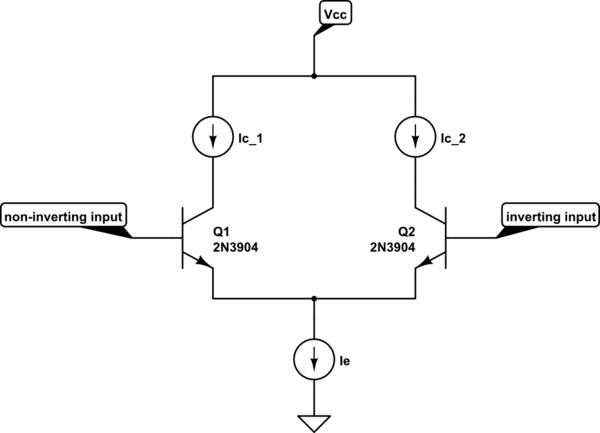 Here is a quote regarding biasing of differential amplifier from Wikipedia:

In contrast with classic amplifying stages that are biased from the side of the base (and so they are highly β-dependent), the differential pair is directly biased from the side of the emitters by sinking/injecting the total quiescent current. The series negative feedback (the emitter degeneration) makes the transistors act as voltage stabilizers; it forces them to adjust their VBE voltages (base currents) to pass the quiescent current through their collector-emitter junctions. So, due to the negative feedback, the quiescent current depends only slightly on the transistor's β.

So, emitter current is forced into each of transistors by \$ I_e \$ somehow, and both of them also pass it through the base into collector. But how that happens? Isn't it true that BJT acts as very high impedance load, if there is no applied \$ V_{be} \$ (basically open circuit between collector and emitter)? Also, both bases are floating, so \$ V_{be} \$ could be anything since we don't know base potential.

I hope someone could explain this matter from mathematical aspect using nodal analysis. If not that way, than any other way possible.

P.S.* I tried this circuit in LTSpice and the both transistors conduct current from their emitters/collectors, but \$ V_{be} \$ look like some random spikes, which doesn't tell me anything useful.

There ar two points to be considered:

EDIT (Addendum): To Keno. Perhaps the following helps to UNDESTAND the circuit.

I was pleasantly surprised to see that my explanations on Wikipedia from 10 years ago were useful for you. I intended to summarize the philosophy of the famous circuit because the moment was very appropriate... but since you considered the issue closed, I will only add links to my contributions in related issues:

In addition, also my professor at university stated that modern ICs are biased in such manner in order to avoid resistive voltage dividers.

Where do input bias currents flow and what voltage drops do they create?

I realized what it explains about: both transistors conduct current set by current sources in the circuit only if bases are grounded (in symmetric power supply design) or there is some other potential (rather then 0V) with reference to ground at base. 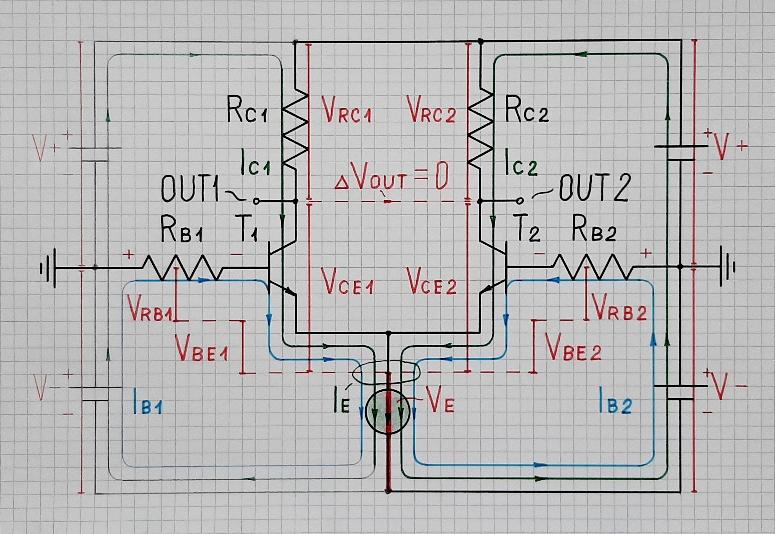 Where do input bias currents flow and what voltage drops do they create (answer)?

I have been wondering, does circuit shown above (in the question) conduct current flow through both transistors as input source is connected between both inputs?

Can we connect a floating voltage source between the two inputs of a differential amplifier? If so, at which conditions?

Can we explain the differential pair in terms of resistances?

How does the compensation resistor in an inverting amplifier compensate for the input bias current?

About transistor biasing and coupling capacitors in ICs

Operational amplifier when the non-inverting terminal is open

Why the common-mode gain of the differential pair is almost zero?

Current mirrors as active loads in BJT differential amplifier, what does that mean?

As you may notice, the purpose of my explanations is to show what is the point of including each building block in the circuit that underlies the real understanding. If something is still unclear, you can ask questions; I would be happy to answer them.