How is the asymmetry of a Schottky diode obtained?

My question is, how it the asymmetry between the two contacts achieved? Is there a doping gradient in the semiconductor? Are the two metal conductors composed of different metals? Is there some third alternative that I am missing?

(The common internet literature on Schottky diodes explains why the Schottky metal-semiconductor junction acts as a diode, but I have not seen an explanation of how the Ohmic contact in the same device is made to be different).

As alluded to by DKNguyen in the comments, the "asymmetry" appears because the contacts on either side of the diode are formed with different metals. A given semiconductor has a given workfunction, as does any given metal. The difference in the workfunction of the semiconductor and the contact metals determines how the interface between the two behaves.

In addition, doping can also come into play. It's often impossible to find a metal that will form a desired contact for a given intrinsic semiconductor, but doping can adjust the workfunction of the semiconductor to make this possible. Often times, the region used to form a metal-semiconductor junction will be doped to adjust the junction properties. For example, ohmic contacts often are heavily doped to lower contact resistance. Another example would be adjusting the doping level of the semiconductor to precisely control the Schottky barrier height (which would adjust the forward voltage of the diode).

If you select the appropriate a metal and semiconductor, each with their own energy bands, that is appropriate to make a Schottky diode it ends up looking like this when unbiased:

Then when you forward bias it it looks like this and electrons can easily make it up the energy slop roll off the energy cliff and move from one side to the other in the forward direction. The cliff prevents electrons from traversing in the reverse direction. 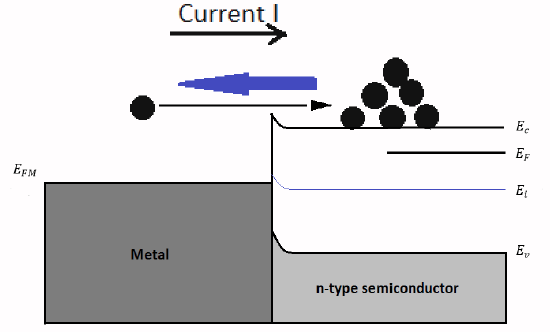 But if you choose the energy bands of the material so that when they mate together, the energy bands transition smoothly without a cliff then you get an ohmic contact where the electrons can traverse in either direction with minimal biasing: 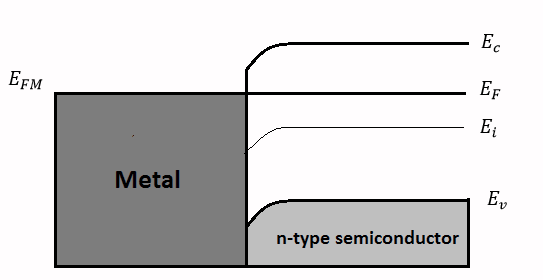 Not the answer you're looking for? Browse other questions tagged semiconductors manufacturing schottky semiconductor-process-technology or ask your own question.