EDIT: I have made the changes suggested with the &gate and the 555 timer to get the (E) enable pulse. I hooked up a debounced switch so I could walk through step by step. This highlighted some logic errors in my code. I also hooked up the R/W pin to the EPROM at a very high address so that I could create what is effectively a NOP. The section I changed is only the buildData function.

The enable pulses seem correct, and it correctly brings the RW pin high to get a NOP for the upper address ranges.

But I still have the problem that it isn't outputing numbers! Only solid blocks of pixels, of a block and 1/2 of pixels.

I've added the datasheet into the question if anyone needs to look at the commands. I think I might need to change the value for initialization, since I'm not sure you can do "return home" and "clear display" with the same write.

EDIT: I don't know the protocol? I have made changes to the setup originally described (but it still doesn't work) and I'm wondering if I should ask a new question, or continue with this one.

I'll continue with this until someone tells me otherwise.

I have added another 74HC107 in order to give myself more clock pulses. I am now using the original 555 timer output for the enable pin and three other pulses for pins A8-A10 on the EPROM. I believe the signals are as per the picture. 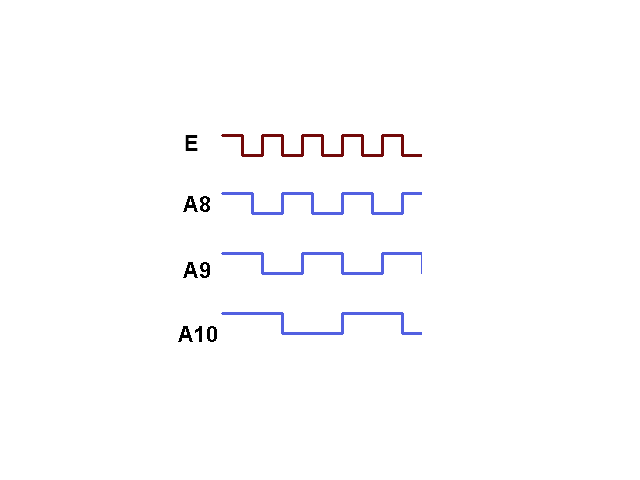 But I don't have an oscilloscope, so I cannot be sure, but after using 4 LEDs for configuration it seems to be correct.

I have modified the code slightly based on the feedback below. The only change is in the "buildData" function:

It appears to be doing more now because a second line appears on the LCD of 1/2 blocks when the FS pin is high (writing data, not instruction) 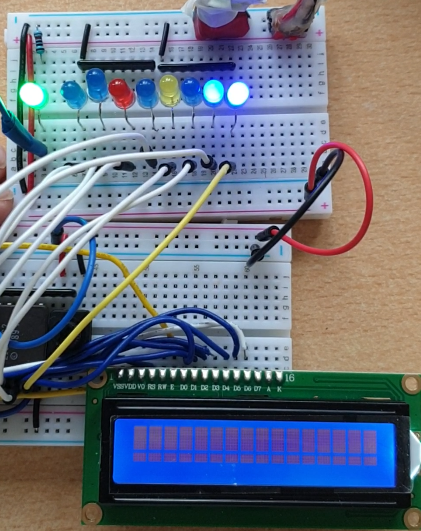 and then clears down when it gets an instruction (FS pin low). 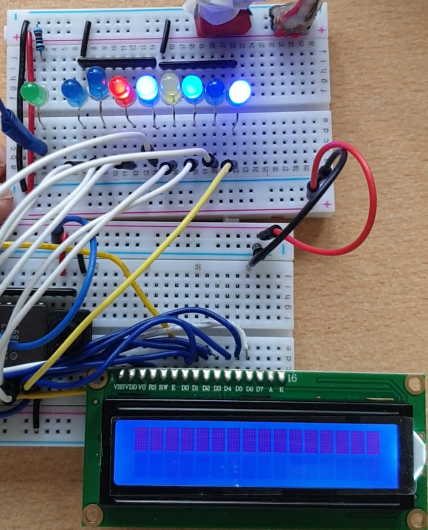 I am encouraged because no one here has yet said I was crazy, and it couldn't be done. I seem to be close, but I'm not getting numbers only blocks.

Just to clarify the LCD pinout:

I'm attempting to translate binary numbers into digital numbers on an LCD screen. However, I'm not using a microcontroller, but trying to do it with some IC chips and an EPROM. The first chip is a simple 555 timer which gives me a pulse. This is fed into a 74HC107 which divides the signal into 3 parts, and I use it for a binary counter which is fed into the EPROM on address lines A8,A9,A10, with the A0-A7 being the binary number I want to convert. The image shows it without power, but it works electrically.

The output is based on the address, and it ties D8 (data out) into RS and will be high or low depending on if it is an instruction in the lower 8 bits or data. I have single stepped it through, and it appears to be sending the values I programmed into the EPROM (code below) correctly. I have checked that the hex file I am writing contains 16 bit values. But nothing appears on the screen. I've swapped all the components one after another and checked the signals coming out.

In theory, it should work, I've seen YT videos of people putting text to an LCD with just a series of switches, so I don't know why this method doesn't work. But it doesn't.

Any suggestions would be greatly appreciated. 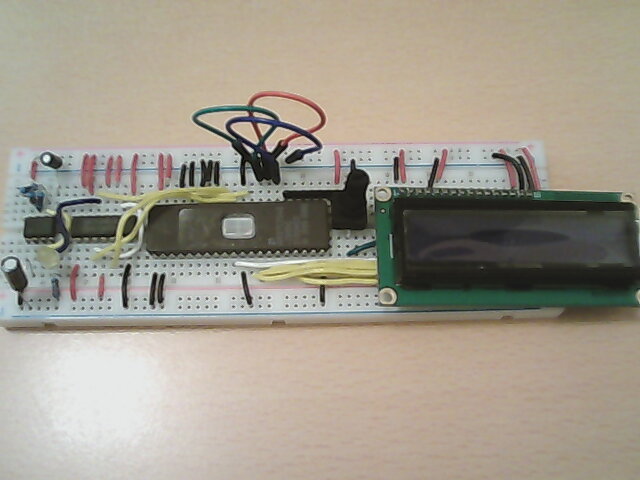 EDIT FOR COMMENTS: I attempted to draw a schematic with Kicad, but the learning curve is too high to knock something out. So I have tried to overlay info from the datasheets and take close up photos to show the wiring. I think I would need a couple of months to figure out KiCad. :(

I grounded the RW pin, because I'm never going to read from the lcd, only write to it. 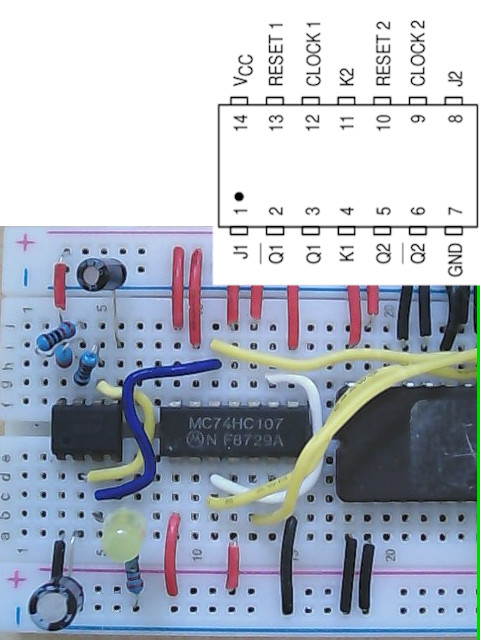 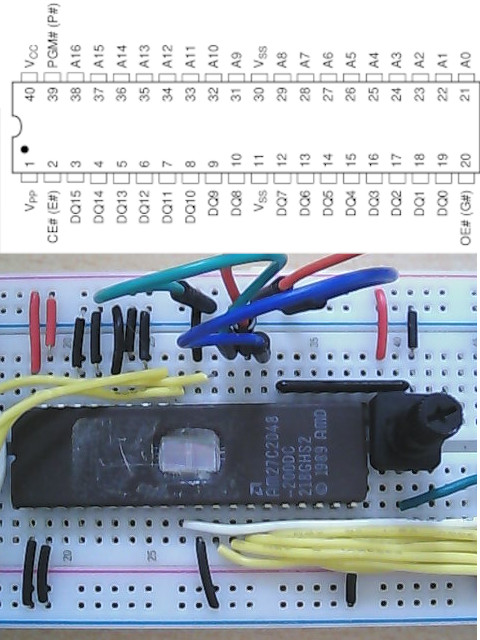 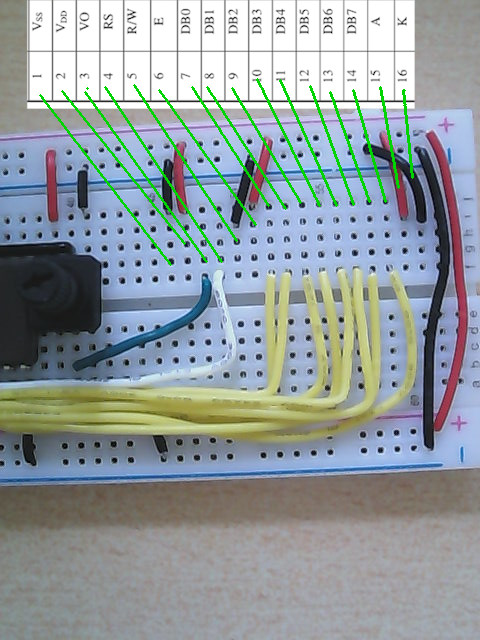 At least the LCD module init is missing a command to actually turn the display on. A simple clear screen will not turn it on. And the clear screen command takes quite long to execute, somewhere between 1.5 to 2 milliseconds.

The move right command may not be needed either, as the display will power up to defaults that the cursor moves right after writing a charater.

Edit: In the comments you said the Enable pin E is wired directly to supply. This will not work. There must be a high going pulse, as the falling edge of the pulse ends a bus operation like a command write or data write. The module just sees one infinitely long bus write that never ends, so it will not reveive any commands or data.

After modifications to the E pin and using the R/W to create a NOP, it still didn't work, however after reviewing a number of other questions related to LCD screens and looking at the header files for arduinio I discovered the initialization sequence wasn't correct. I modified the code using the init sequence examples in the datasheet. While it still isn't working correctly, it does now show some numbers rather than blobs.

I think any issues I'm having now are input/software related.

The issue was threefold. Not using the RW pin, no/bad pulse length on the E pin, and initialisation sequence.

For controlling Enable I would use a clock from 555 with little time delay to let the data to be stabilized after new byte. You can change this delay to less (to about 1us), tune according your 555 frequency. I don't know what clock edge you get a new data from EEPROM, this proposed connection should work for rising edge. 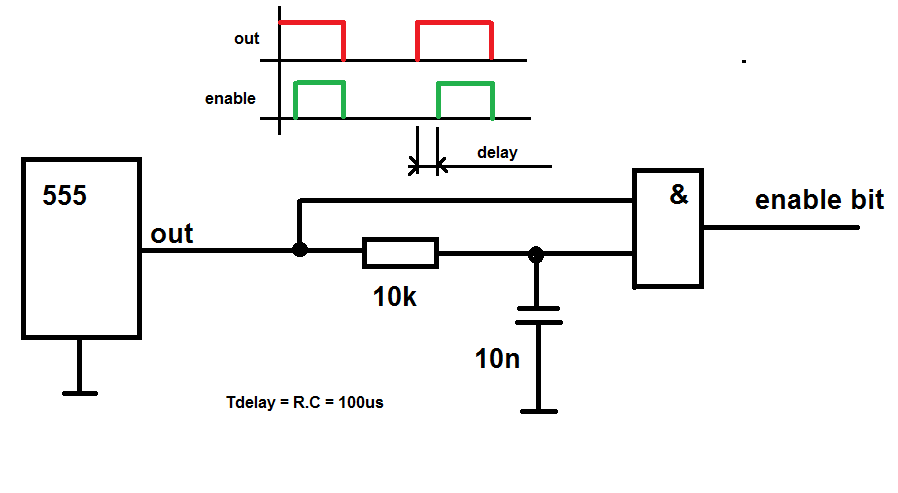 You must probably achieve something like this, shorten the E pulses from both sides:

Since the 74HC107 is negative edge triggered, if you want to use a 555 signal for E you must negate it and cut beginings according to picture. Then you will get a safety time-intervals for command changes.

Not the answer you're looking for? Browse other questions tagged c 555 lcd eprom or ask your own question.

0
How to create a delayed clock pulse, then return to regular clock cycles