Why are two 1 kΩ resistors used for this additive stereo to mono conversion? (For audio inputs to an amplifier)

I'm trying to convert a stereo signal to a mono signal. It would come from a 3.5 mm stereo audio jack. The jack could be from just a dollar store headphone, where I'd cut out the ear pieces, only leaving the 3.5mm jack and the wire that will be stripped, exposing the left, right, and ground wires.

If I wanted to combine the left and right signals into a mono signal to be fed into an amplifier, I'd use the circuit represented by the following diagram:

The above diagram is the most commonly suggested approach to combine the two signals into single signal.

What are the 1k Ω resistors for?

It's not adding so much as averaging. You have a 1:1 voltage divider there, so the open-circuit voltage at "MONO SUM +" will be halfway between the voltages of the two channels.

But why resistors, and why those values? Well, your audio device is capable of a certain amount of current. It expects to be driving headphones or speakers or whatever. If you connect the two channels directly together, then whenever their voltages are different (which is most of the time) they will be trying to pull each other up or down, with absolutely as much current as they're capable of. This isn't good for longevity, or battery life, or audio quality. With 2k of resistance between one channel and the other, the amount of current that they can use to fight each other to around 1mA or less, which is probably fine.

But there is a down side, which is that this circuit is only really suitable for driving a high-impdance load (like the inputs of most amplifiers). The output voltage is the average of the two inputs when the current flowing out through MONO SUM + is pretty close to zero. But if you connect it to a load with an impedance of less than a few thousand ohms (say some 8-ohm speakers) then the voltage at the output will be much lower, most of the power will go into heating those two 1k resistors, and very little of it will go into the load. Again, the resistors make things safe so that you won't actually kill your audio device, but the result will be a low audio level.

For many low level audio output devices you can mostly get away with just connecting left and right channels without using series resistors. In effect there are still series resistors (inherently) in each channel output but these of course are invisible to the casual user.

You can't do the same trick with power amplifiers because they don't inherently have series resistors that can limit current.

It's no different for left and right audio channels; the two resistors produce an output that is the average of left and right channels hence, it is mono. The "averaging" is easily proven using Millman's theorem: - 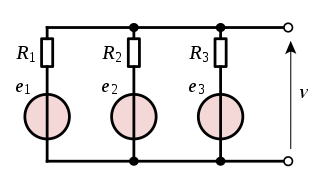 The two resistors form a passive summing circuit with weighted inputs (voltage summer). You can use the superposition principle to find the relation between the two inputs and the output.

Here are links to related resources with my contribution:

Walking along the Resistive Film

Passive voltage summer animated I created this interactive Flash movie in 2002 by means of Macromedia Flash (now Adobe). Unfortunately, Adobe stopped their Flash Player... but still there is a way to watch Flash movies - Ruffle Flash emulator. You can add their extension to your browser (see also another explanation). Or, you can download the exe file that has an embedded Flash Player.

You can't tie the channels together since they are not always at the same potential, and you want to add the channels symmetrically so you need the exact same resistance on both.

5
Op-amp can add more than two voltages, while discrete transistors can't?
2
Non-inverting Op-Amp Audio Mixer
1
Making a Simple Audio Mixer
0
How can I calculate my output and gain when 2 sources are connected at the positive input of opamp?

4
Why is there a resistor and a capacitor in this AUX cable's diagram?
0
Why are resistors used in LED strips?
2
Voltage divider to drop volume of one speaker by 1.5dB
0
Is it a good practice to use resistors for MCU inputs for this case?
0
Why are resistors necessary in a summing audio circuit?
1
Why does this 8 step sequencer schematic need two resistors for each output pin?
30
Why aren't resistors being used in this flip-flop used in static MOS RAM?