Problem with drawing vector lines on an XY oscilloscope, caused by X and Y being set at slightly different times

I'm doing a project where I need to draw shapes on an oscilloscope by controlling the X and Y channels from a microcontroller, to eventually make a game which you can play on your oscilloscope.

However instead of drawing a diagonal line, it draws a square. This is because it sets the X position before the Y, so supposing the beam is already at 0,0, it will first move right, then up, then left, then down, and so on.

A (bad) fix I came up with was to make a function called lineto(i, j), which draws a line from the current position to the position (i,j). This function just moves from the current position to (i,j), but in a set amount of steps. If I set the amount of steps to a few hundred, I get a relatively smooth line, but at the expense of a lot more calculation, and then it's not even really vector graphics anymore.

I've been looking at setting digital pins at the same time, and this is doable, but only if they're all in the same port. I was thinking of using this fact to control two external DACs at the exact same time, but since a port is only 8 bits, each DAC would only get 4 bits of information.

Does anyone have any ideas as to how I could achieve this?

Here are two images, the first one shows the XY plot of the signal when I try to do this, and the second shows the X and Y waveforms separately (X = bottom, Y = top). 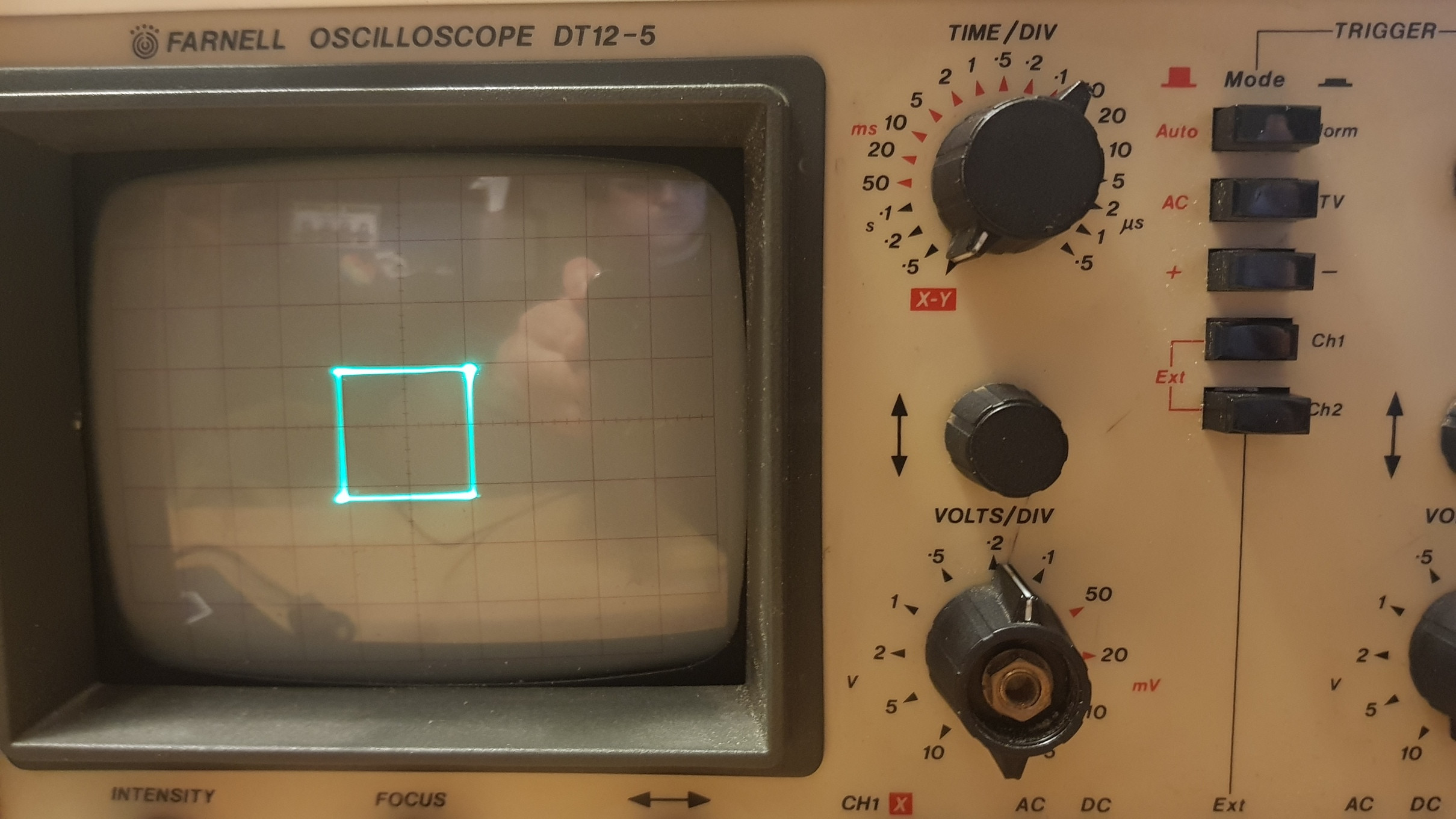 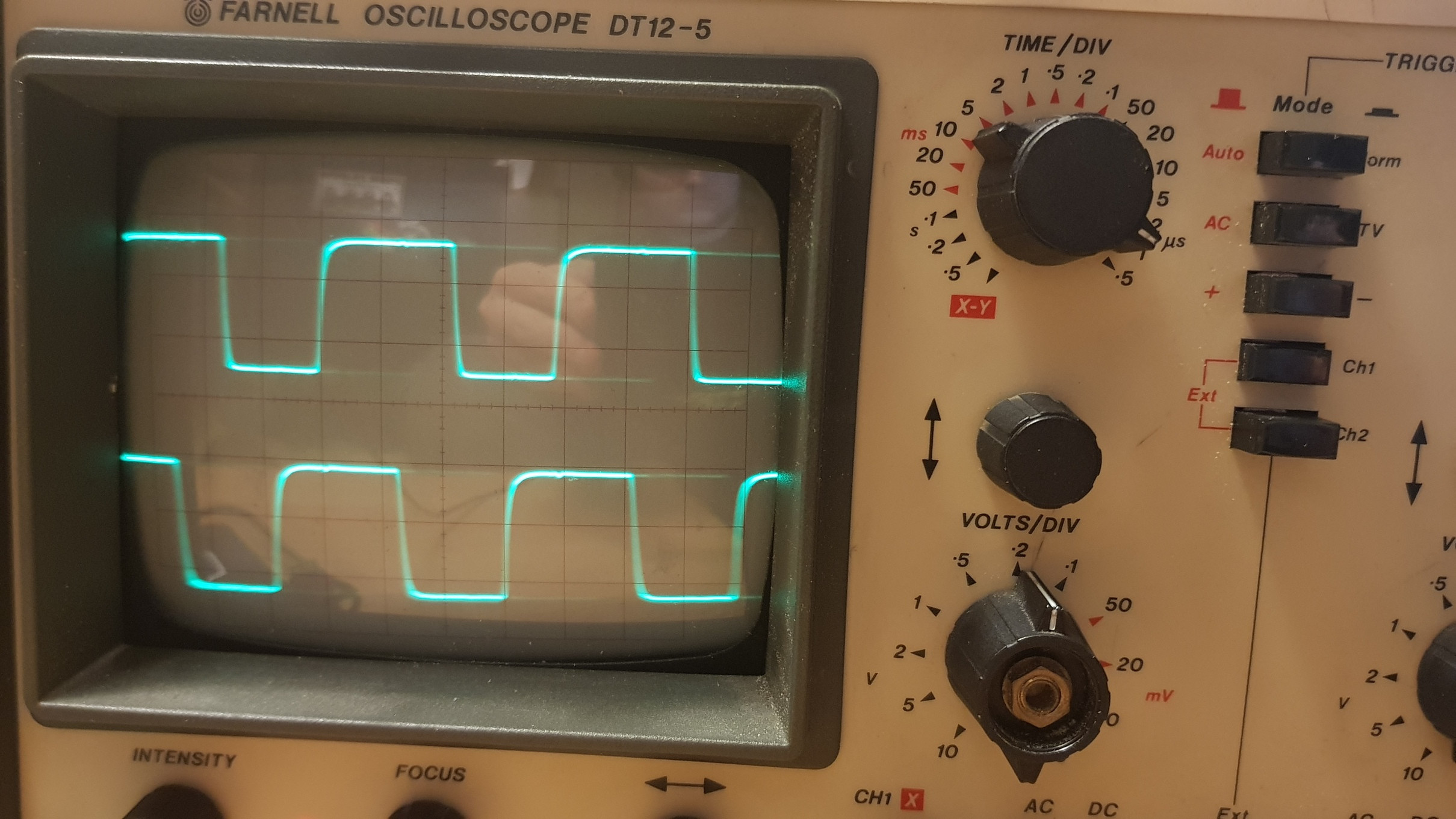 You already found the reason why you see a square. Because each analogWrite() takes about the same amount of time to execute, each edge of the square is one transition in the outputs.

So it is clear how to resolve: Both X and Y outputs shall change at the same time.

To accomplish this you might like to think about a (logically) common register for both values, which can be loaded at any (slow) pace from your microcontroller, but will latch all bits with a single common signal. Perhaps your DACs already have such an input. Alternatively see for example the 74HC595 that has a shift clock and a register clock.

However, the time the signals use to get from an old value to a new value will be more shorter than the time they keep their values. And so you will have bright nodes with dim edges. To resolve this issue and to get bright edges, you will need to implement for example the Bresenham algorithm and generate each step by software. They will look "pixelated," though.

Another note: To separate objects of the planned game, you need to switch off the beam in the oscilloscope. This is done via the Z input. You will commonly use just a digital signal for it.

You could pause at each vertex. This will make the vertices brighter, but you could use the Z axis (beam brightness) to reduce that effect. So:

And repeat. Your line will be a lot dimmer, since only the strokes will be displayed, ratioed with the pause time. You might choose to slow the strokes in hardware. Pause time should just be long in comparison to your X-Y update delay. So if your update delay is 10us, then 10ms delay will reduce the squareness effect by 1000, and you still get 50 updates per second.

lineTo is the correct approach to get a line as opposed to two dots. The calculations required are just the cost of doing business.

Normally you would offload most of the calculation to vector graphics hardware; which would also guarantee simultaneous X and Y updates : this would make a nice FPGA project if you were so inclined (you would need to feed X and Y calculated in the FPGA to two DAC channels to get the analog voltage required).

Your system has a DMA channel to the DAC you should probably be using that. that will allow you to sequence a pattern in RAM and have the DMA send it to the DAC while the CPU is constructing the next pattern. it should also fix the time skew between the DAC channels.

Not the answer you're looking for? Browse other questions tagged microcontroller analog dac or ask your own question.