If the ferrite is designed to filter out in the lower region, up to 100 MHz, and the pass-band signal is even way lower, 60Hz, I'm thinking that the ferrite is constantly saturated along with the 60Hz signal. Now let's say 900MHz ISM-band signal is coupling into this, I wonder if the saturated ferrite would actually rectify some of this... what do you guys think?

Perhaps not ISM band.
Michael J Rainey made some pretty weird radio circuits, both transmitters and receivers. One of his efforts did use some ferrite toroids as detecting devices, using their non-linear B-H characteristics to convert a 24 KHz radio signal to audio, driving headphones.

A signal generator at 12 kHz provided the bi-polar sine wave current that drives two small ferrite transformers through their non-linear region. Their impedance becomes small on both positive and negative peaks of the 12 kHz "local oscillator" signal. This is called a "Polyakov mixer" for the 24 kHz antenna signal. 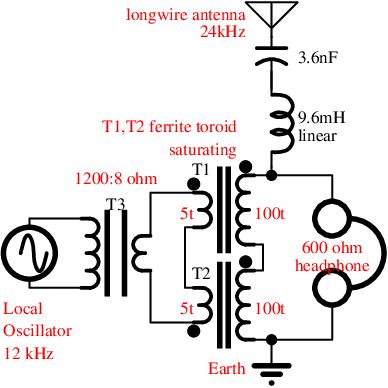 Those two small ferrite cores saturate at about 0.4 Tesla.
This receiver provided a strong audio signal from nearby U.S. Navy transmitter NAA, a rather high-power source.

Why are two saturating transformers used?
One would not want to listen to the very loud 12 kHz signal from just ONE transformer. With T1, T2 windings oriented properly, 12 kHz from T1 cancels 12 kHz from T2 at the headphones. Yet T1 and T2 saturate at the same part of the 24 kHz signal, directing the RF signal away from headphones. Back-to-back diodes would likely switch more efficiently.

These ferrites are driven hard so that saturation occurs on the peaks of the 12 kHz local oscillator. For a ferrite bead to exhibit non-linear effects, currents (presumably 60 Hz) would have to sweep through a non-linear section of the ferrite B-H curve. A significant DC current might be large-enough to get close to saturation, where B-H is most non-linear.

Not all beads behave the same, yet have the Mfg process and equivalent circuit of an inductor. 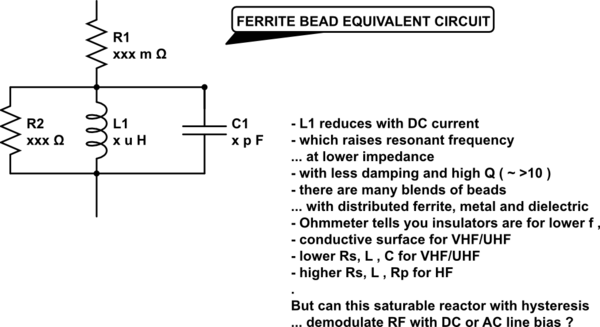 I haven't seen one yet, but putting an FM signal over a partial saturated DC core with AC ripple might convert a strongly inject line carrier FM into AM. But is that just noise? or signal? If it's signal, you better get the right ferrite.

It is highly unlikely that the ferrite is 'rectifying'. Rectify means something along the lines of 'convert to DC' which a ferrite simply cannot do.

It's possible in the right environment that it could 'pick up' magnetic noise, but remember that its going to attenuate a lot of that. Check the datasheet for the inductor, it should give a graph of attentuation vs frequency (or impedance vs frequency).

I'd say look elsewhere in your circuit first.

Not the answer you're looking for? Browse other questions tagged ferrite ferrite-bead or ask your own question.