Negative terminal of a sine generator 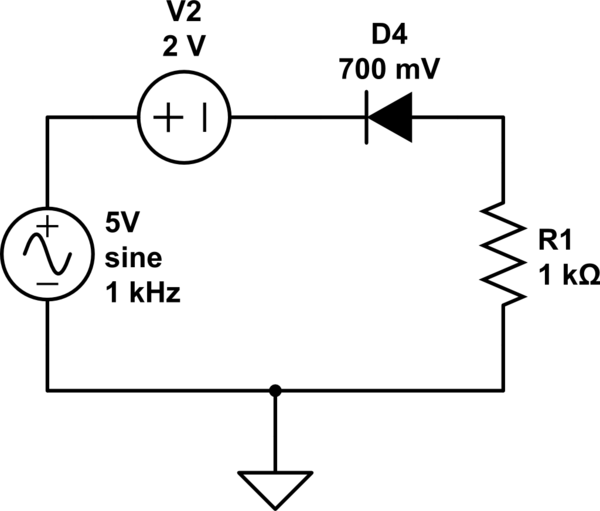 I had this problem where the anode of a diode was connected to the negative terminal of a sine generator.

I wondered how it functions so that I can get the current that goes through the diode.

If lets say Vi(V1) is the positive terminal of the generator, would the negative one have the opposite wave, as Vo = -Vi?

I know it's a very basic question but I was surprised to find out that most of my university's students didn't knew the answer to it.

The negative terminal of V1 is 0V by definition since you connected it to ground.

And the negative terminal of V2 is the output so as in the first sentence. It's 2V less than the positive terminals of V1 and V2.

Not the answer you're looking for? Browse other questions tagged circuit-analysis diodes sine signal-generator or ask your own question.

1
How do you remove negative voltage from a sin, triangle or square wave?
6
walking ring sine wave generator
3
Modified sine wave inverter
0
Why this point in this schematic will begin at 2V at 0ms?
0
Why does a classic envelope detector produce a negative voltage for some periods, when high frequencies are put in?
1
Logic gate on negative signals
3
Why isn't this active rectifier circuit working?
3
How can I explain the unexpected negative voltage in the output signal obtained from half wave rectifier?
0
What is the problem with connecting a negative voltage to an op amp's negative lead while the possitive one is grounded?