The board in question is a four layer board, with a dedicated ground plane as well as a dedicated power plane. Capacitors are MLCC, imperial 0402 (metric 1005). MCU is an STM32.

The question now is how to combine decoupling capacitors and vias. The best way would be to use plugged via-in-pad, but sadly for this project this is out of the question.

See the 2010 article "Five Via-In-Pad Myths" from cadence.com: "That little mask dam will stop solder from flowing into the via and everybody will be happy." The downside: due the relatively long traces, the inductance will be relatively high. The following picture shows a capacitor (imperial 0402/metric 1005), a 0.2 mm wide trace, a 0.6 mm diameter via (hole size: 0.35 mm) and 0.2 mm distance between the annular ring and the pad of the capacitor (the mask dam mentioned above): 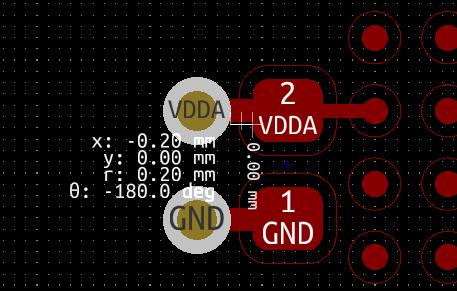 The second option could lead to problems during assembly (solder paste getting sucked into the via) but will have superior inductance, as the annular rings of the vias overlap with the pads of the capacitor. No traces are used. See the 1997 article "Bypass Capacitor Layout" by Dr. Howard Johnson: "series inductance is impacted favorably by ... vias jammed up next to the pads (no traces)". See this picture in which the right edges of the via holes line up with the left edges of the pads of the capacitor: 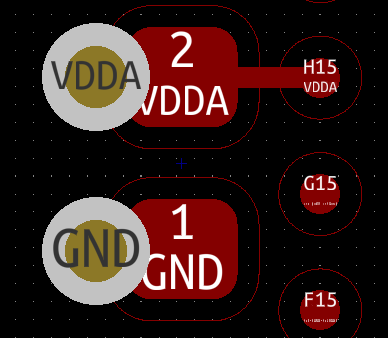 If you don't want the solder to be sucked into the via, then the via has to be a bit away from the pad, and a solder mask sliver between them, but you could:

Here's a FingerPaintCAD example, a bit ugly but you get the idea, just apply a wider trace width... 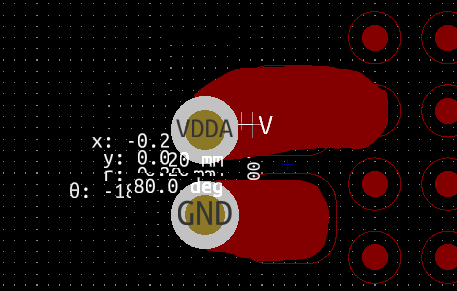 If it is super important that this pin has a very low inductance to ground you can also use a lower inductance cap (LLL, NFM). But I don't see a GND pin next to it, which means the manufacturer of the chip didn't think there was a need to create a low inductance power/ground pair, so most likely it does not need any fanciness.

Unless you have a very specific problem you are trying to solve, I would not butt my vias up against the pads. The potential for manufacturing problems is just too high.

The tiny tiny inductance added by those small traces is (likely) dwarfed by the inductance of the capacitor you are mounting there and will be inconsequential in the vast majority of applications.