Vintage germanium transistors: How does this metronome oscillator work?

I'm trying to restore and learn from a simple metronome assembled by my uncle in the 60's. It has a nice sounding beat and used to work until very recently — although unstable. I've made a schematic from tracing the board tracks which is included below without the power supply for simplicity.

Being a beginner myself, I cannot understand the disposition of Q1 and Q2. It looks like the SCR explanations I've seen around, but I'm not really sure if they are there to work as an SCR.

I assume that the rightmost part with Q3 and Q4 is just there to amplify a pulse generated by the leftmost part of the circuit, specifically coming from between R4 and C2. But how does this oscillator work at all?

The transistors are from RCA, with SK3020 being a silicon NPN and SK3005 actually a germanium PNP. I'm not sure if there are any particular characteristics of them that enable this functionality, and I could not find much about their differences to modern silicon transistors.

Any pointers or topics to read about in the direction of understanding how this circuit is creating pulses is greatly appreciated. 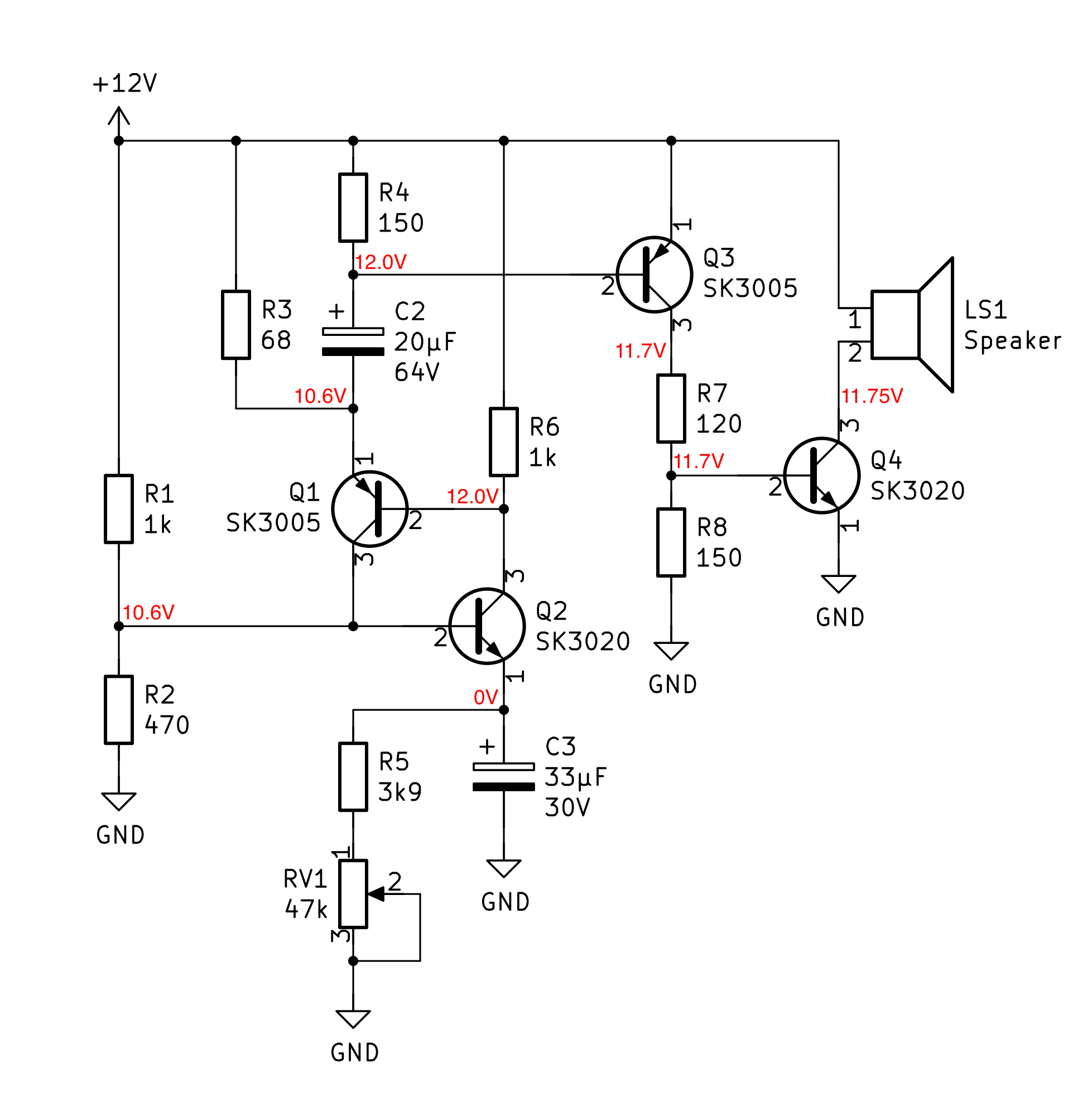 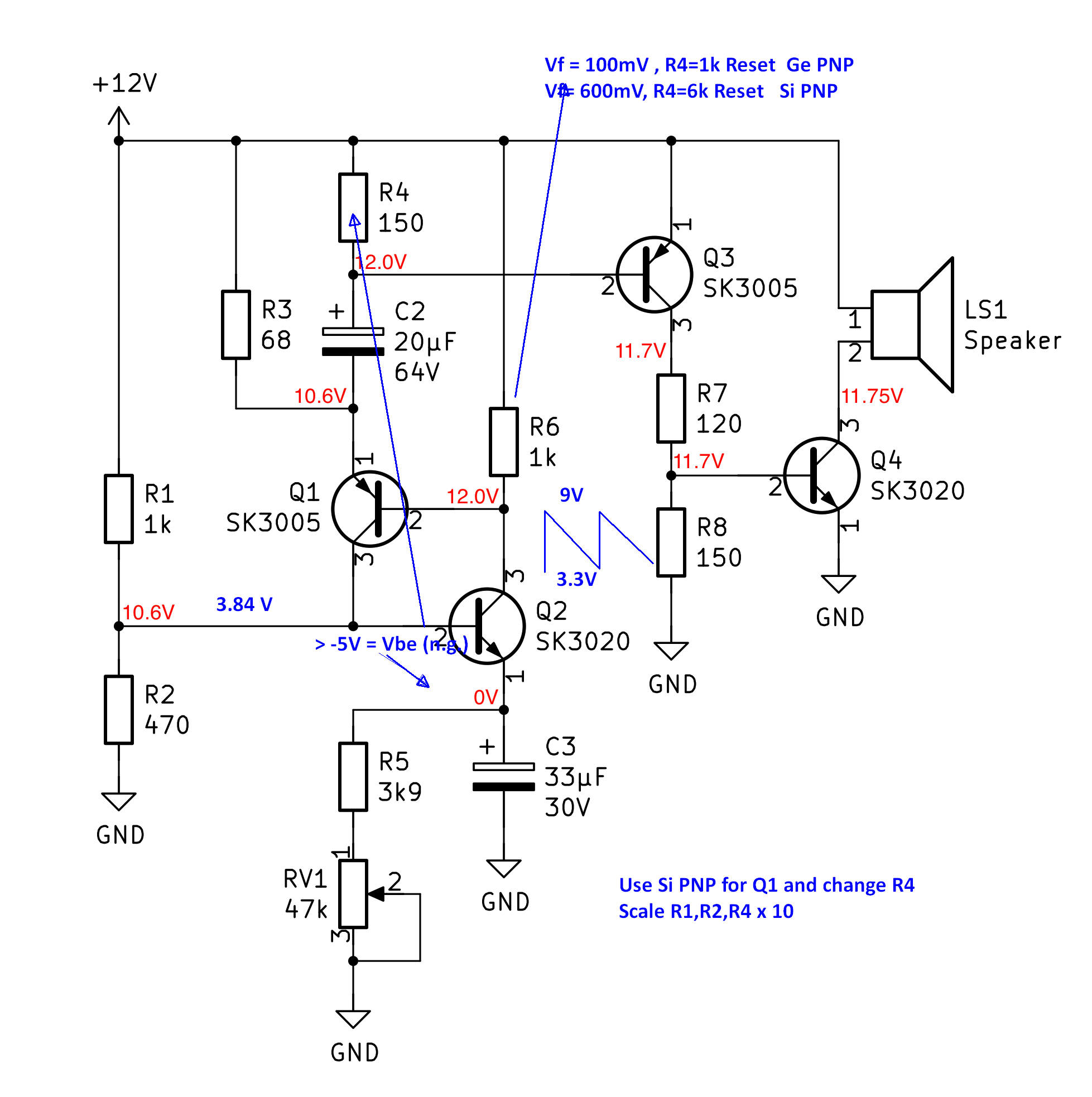 This is a clever little 2 transistor Astable multivibrator with a pulse generator to drive the speaker with a spike from 1/4 or 1/2s to 2s for a metronome like click generator with RV1. Beyond this range it stops to oscillate due to gain ratios of Rc/Re.

The Sawtooth Generator ramps up Q2's emitter cap. initially but then has little effect after that on frequency as Q1 effectively cuts off Q2 from conducting current by pulling the emitter voltage up far above the base voltage. In fact too far as Q2’s Vbe > -5V which is a common MUST NOT EXCEED rating for most transistors.

R3 then pulls down the cap voltage until Q2 can conduct and is triggered then by the positive feedback loop (SCR like effect) of Q1 to Q2 with Q1-Vbe being the comparator and Q2 being the discharge which turns itself off by the R ratio of R6 being much smaller than Q2 emitter R.

R1,R2 and Q2 emitter-follower is only to set the sawtooth to the low voltage < 1/3 of 12V Then R4 pulls up the voltage too high, so I would increase it and at the same time R1,R2 to reduce excess power consumption of the bias to Q2.

My recommendations are on the mark-up schematic. But mainly since Ge transistors are rare, change Q1 to any Si PNP and R6 to 5.6k and replace dead Q2,Q4 with PN2222A or equivalent.

Fun fact: the two transistors look like an SCR, but is not since there are 4 terminals unlike an SCR which exposes only 3 terminals. The 4th is used for biasing both off and detect the current in R6 until the top one conducts and is reamplified with positive feedback from the lower Q2 to rapidly switch for the sharp edge of the sawtooth. Then they both shutoff as the RC circuit decays with a linear ramp then repeats.

This circuit was copied out of the RCA Hobby Circuits Manual 1968. Complete entry shown below, including original description of operation. 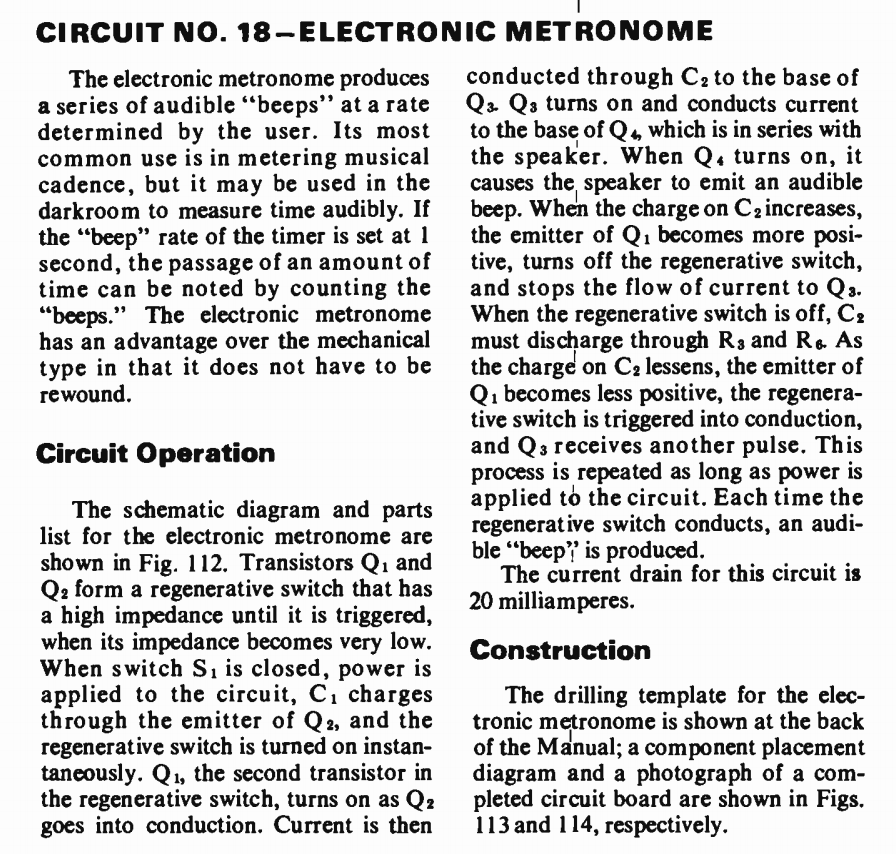 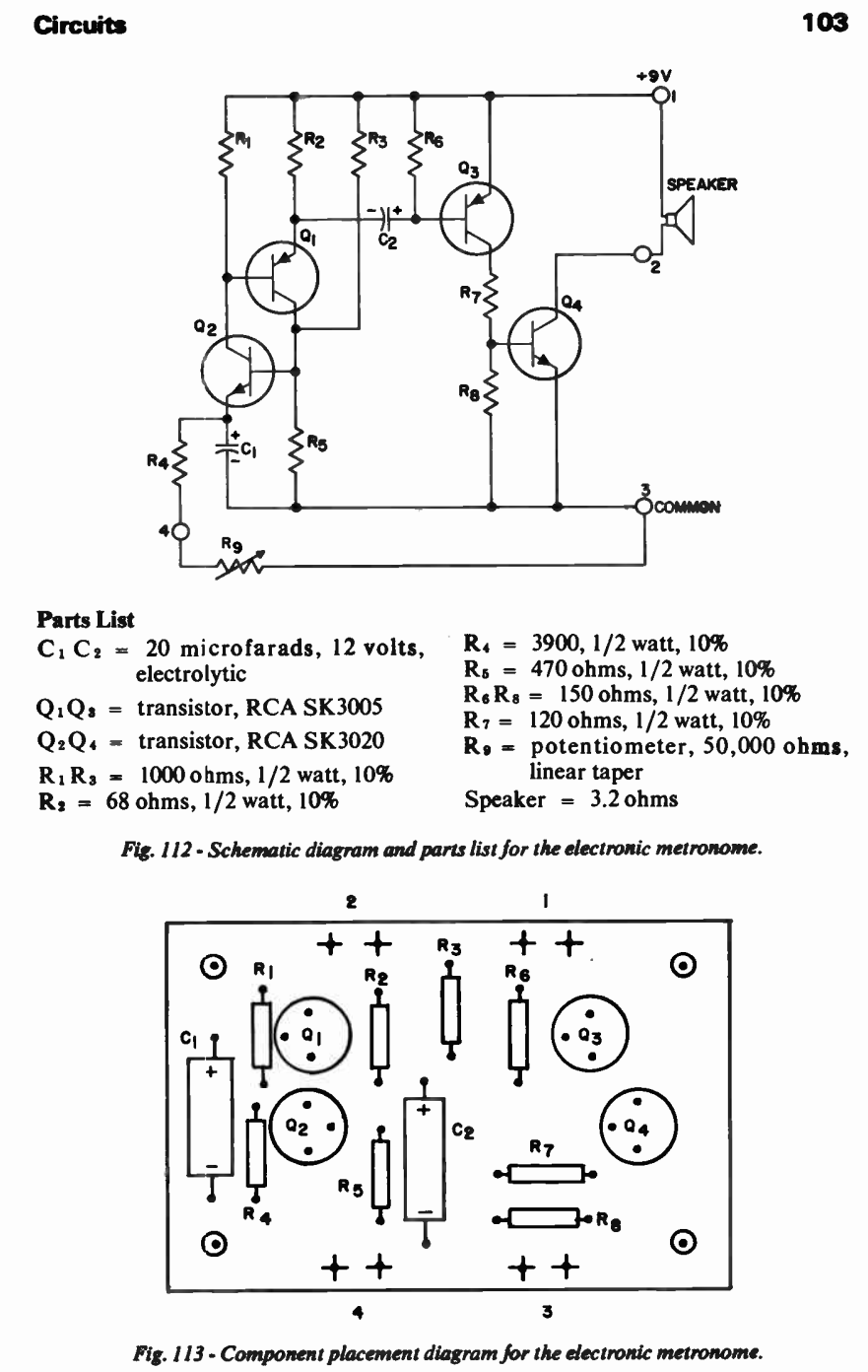 To answer the question you didn't ask:

The direction of the voltage is base positive for an NPN, base negative for a PNP (it follows the 'P' and 'N' in the name).

If you see more than that, the transistor is broken. If you see less, either the transistor is broken or it's turned off (which can be the case for this circuit: in normal operation Q1 and Q2 will almost never be on at the same time). Since this circuit is designed to be an oscillator, you can't just measure voltages statically -- trying would just get you messed up measurements because the voltages would be bouncing around. However, if you put one meter lead on the base and the other on the emitter and measure there, then you'll always be measuring the voltage of interest.

It does work like an SCR as you described.

Assume C3 is charged to a higher voltage than the junction of R1 and R2 (about 4V).

C3 discharges through R5 and RV1 relatively slowly creating an exponential negative going ramp until the voltage becomes slightly lower than 4V; Q2 will then start conducting. The current from Q2 through R6 will forward bias Q1 that will then raise the voltage of Q2 base causing it to conduct more.

This proceeds until both Q1 and Q2 are conducting heavily and charging up C3.

As C3 charges, the current into the base of Q1 reduces until it is insufficient to keep Q2 conducting and the process stops with neither Q1 or Q2 conducting and C3 charged up close to 12V. C3 will then discharge through R5 and RV1 to start another cycle.

This sequence will result in a continuous sawtooth waveform across C3 with short pulses of current through Q1 and Q2.

If you replace the transistors with silicon ones R6 will need to be increased greatly because of the higher Vbe of silicon transistors (Maybe to 220k, it would work even without a resistor at all).

As you correctly state the remainder of the circuit is to amplify the pulse from Q1 to a level suitable to drive a speaker.

As @Tony Stewart mentions in the comments leakage in the capacitor C3 could stop the circuit from working or make it unstable.

Regarding your intent to use germanium and silicon transistors:

The circuit can pretty much work with whatever silicon transistors you build it, as long as you don't mistake pnp for npn ones.

The reason why PNP ones are germanium and NPN ones are silicon lies in the history of the semiconductor technology. It is easier (i.e. cheaper) to make NPN silicon transistors (starting from low-doped N bulk silicon) and it is easier to make PNP germanium transistors. That's why older (germanium-era) circuits tend to use more PNP transistors and newer circuits lean to NPN. Your metronome is in the middle with equal number of both.

Regarding the unstable work of the metronome:

C3 is electrolytic and prone to drying of the electrolyte (making it unstable long term and depending on temperature),

RV1 is a variable resistor that wears out and gets unstable short term (up to changing its value significantly because of a speaker vibration).

First of all, try a nice clean of the board as copper may make salt crystals over time which are sometimes invisible and make lots of problem for oscillators. When you've checked many times its traces or whatever are clean, you can develop further by finding the test points for your analysis.

Check the speaker resistance. It's right connected to 12 V as it may be stuck or defective. And go in the direction of the signal. 12 V seems a little high. Try loading it progressively from 4 V if it makes any oscillations. Also, 12 V on both ramp transistors suggests they may both be defective.

Not the answer you're looking for? Browse other questions tagged transistors circuit-analysis circuit-design oscillator pulse or ask your own question.