How to get working "specs" of iMac fans from logic board schematics? [closed] 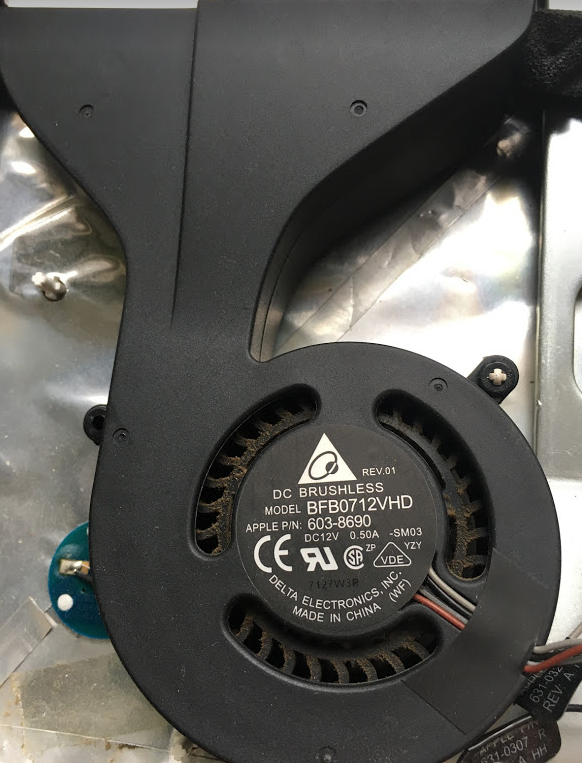 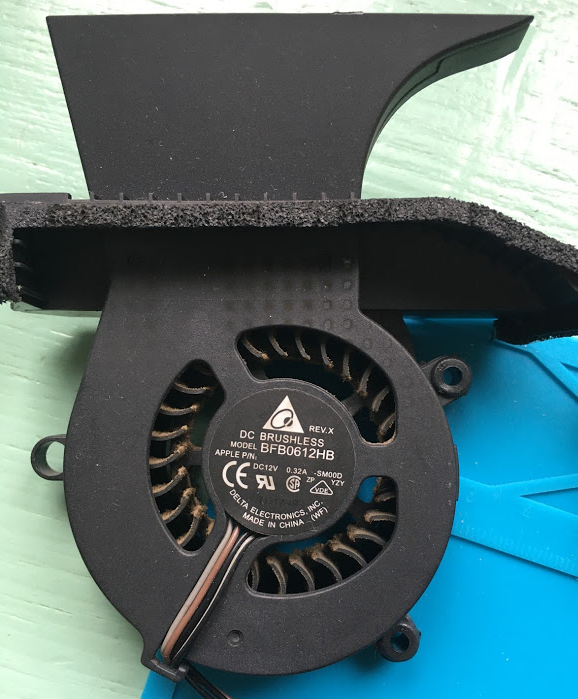 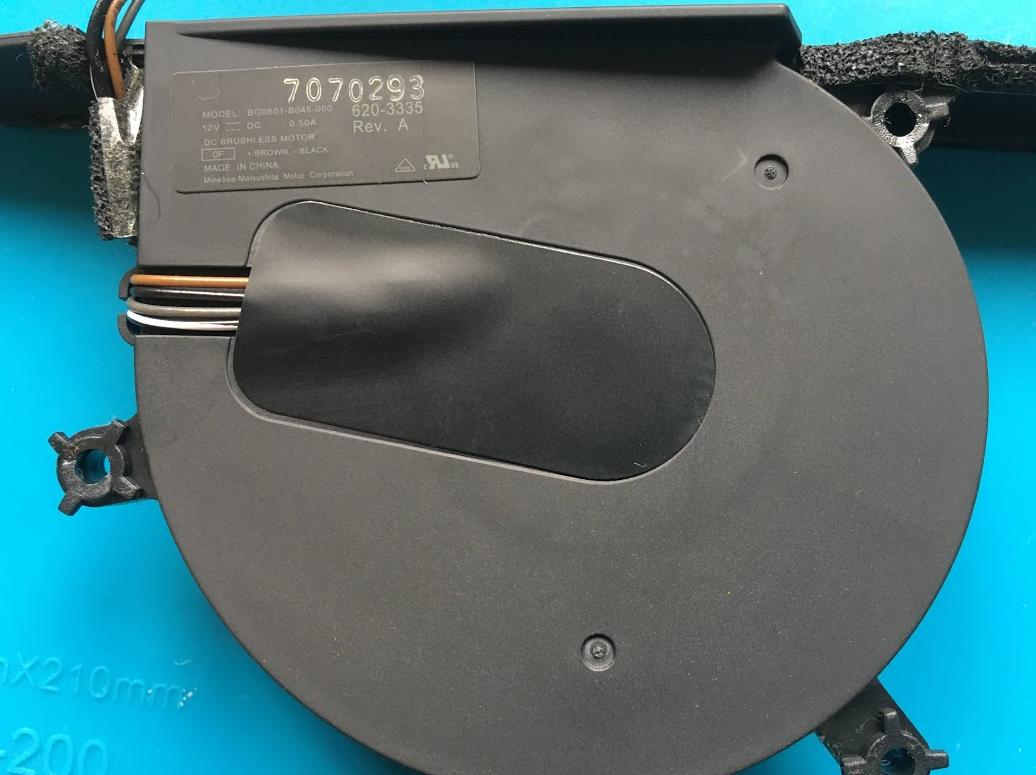 Querying on search engines I found some matching part numbers, but none of the results gave me an accurate answer.

I found some information about other iMac fans, an older iMac G5 17'', a newer 27'' iMac as well as an unknown Apple Logic Board pinout. From there I learned more about computer fans, and PWM controlled fans 4-wire Intel specs.

All of that points me to guess that they are PWM controlled. All of them are labeled 12V DC and follow the same cable color convention.

Having understood what PWM is, how it works, and based on what I have been reading, it's clear to me that to drive them from the GPIO pins of a Raspberry Pi, I need the specs to be able to generate the correct signal. The same applies to read the tachometer signal.

BTW, I also understood that I must get an oscilloscope.

From what I've learned, without any specs, neither a scope, I decided to test with different voltages on PWM cable.

I tried to measure voltage on the tachometer cable with a very basic multimeter without success, but setting it on the continuity test, I can hear it beeping faster or slower depending on the Vin supplied.

Are those tests safe for the fans?
Is there a way to know the specs without a scope?
Can I use the fans with relays forgetting about PWM?
Without specs, is there a way to try to read the tachometer without harming the GPIO on the Raspi board?

I've been thinking that, since I've the logic board, it should be possible to know what components are involved to power the fans, and it would be even better, if I have the schematics. I searched, and I found the schematics of some Apple devices. The schematics of "APPLE IMAC G5 A1058 ISIGHT M38 DVT MLB - 051-6949 - REV 09 11.16.05.rar" logic board use exactly the same fans that I'm using.

I'm using the original iMac A1208 power supply to power them. 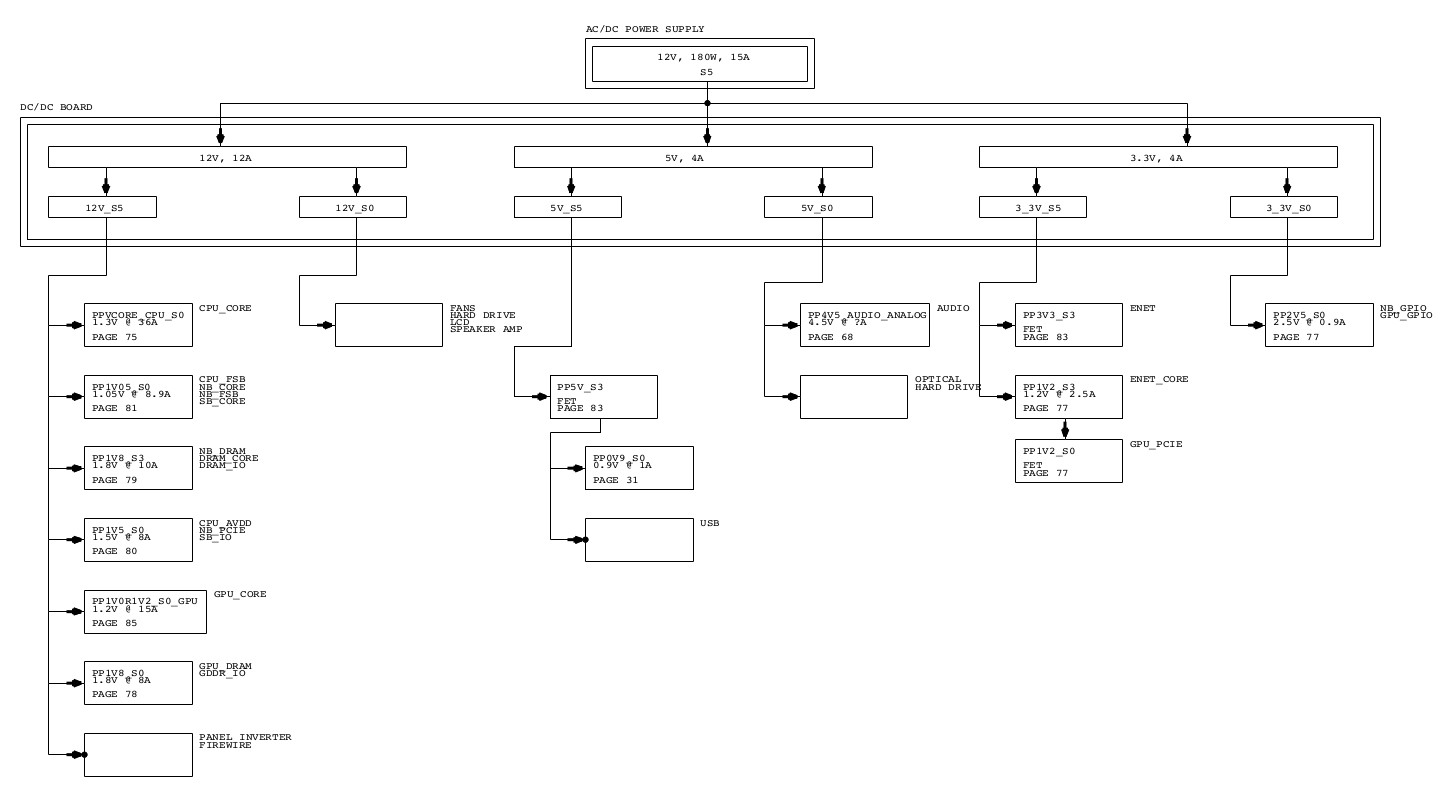 The point of all of this is to replace the faulty main board with a Raspi in order to reuse it as a kitchen computer.

Also, it serves me as a playground to learn electronics, as of, to other people looking for information to reuse iMac parts. :)

I also plan to reuse the temp sensors. I will gather more info and update this post.

Having not enough knowledge about electronics to understand those schemas, now I'm asking: With these schemas, can somebody tell me the working PWM values to safely drive the fans and read their tachometers with a Raspi?

By now I did some testing, and I'm sure I can drive them with relays switching between 0V, 3.3V and 5V. Didn't make any tests yet to read the tachometer.

The tachometer sounds like an open collector, which is very common for fans: a NPN transistor whose emitter is connected to ground and base to the rotation sensor, leaving the collector attached to the wire coming out of the fan. This allows you to interface the signal to whatever voltage output (within reason) you need by selecting an appropriate pull-up resistor. I found a datasheet for what may be a similar part here: https://www.delta-fan.com/Download/Spec/BFB0612HB-N.pdf There's no spec listed for the open collector output. Usually they'll give you a maximum collector current and collector-emitter voltage. I'd start with maybe a 10k pullup resistor; I can't imagine the transistor getting burned out from 500 microamps.

Are those tests safe for the fans?

Is there a way to know the specs without a scope?

yes, you can interpret the transfer function as I did but there may be nuances.

Can I use the fans with relays forgetting about PWM?

Yes, with voltage or R Ratio control but why relays when a transistor with switch.

Without specs, is there a way to try to read the tachometer without harming the GPIO on the Raspi board?

Yes, its an open collector so you decide on Vcc and using 1k~10k is typical. You can measure PWM or convert to Vdc with a pullup R and Cap for T=RC delayed result.

Since the Intel Spec for PWM uses a TTL input threshold of Vil max = 0.8 that implies a threshold of 1.3V used by TTL or 2 Vbe drops.

However you used DC instead of PWM to vary the speed, this suggests a PWM to Vdc tach-like circuit so Dc can control the speed from 1.4 to 5V. However, fans may start to have a greater stall voltage threshold than 30% when bearings get stiff but must start with < 30% then may be reduced to 15% after.

The Intel spec indicates fan keeps running at 0% PWM after > 30% is applied perhaps at 15% max RPM. Older fans may not meet this.

But if using PWM, you must NOT use a pullup resistor on an open collector NPN as this will raise the Vdc to the PWM averaging circuit. The fan will provide 5V pullup after (1? or) 2 diode drops.

0V operation after started depends on the age of the fan and bearing quality.

2
Arduino controlled PWM PC Fan
0
Drive a DC motor as the maximum speed with a Raspberry PI
14
What's needed to put a PC fan into reverse?
2
simple circuit review
1
Relay-controlled Fan Transient Question
1
Why does my DC power supply fluctuate and say 0A? And why won't my motor spin?
5
Can PWM affect a brushless DC fan given sufficient time?
0
How to infer the max current output of this function generator from its datasheet/specs?
1
How to run a PWM controlled fan at 100% all of the time