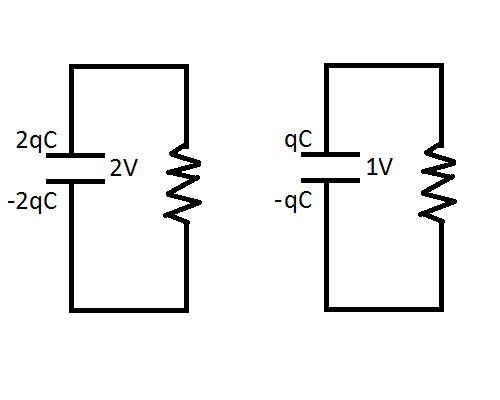 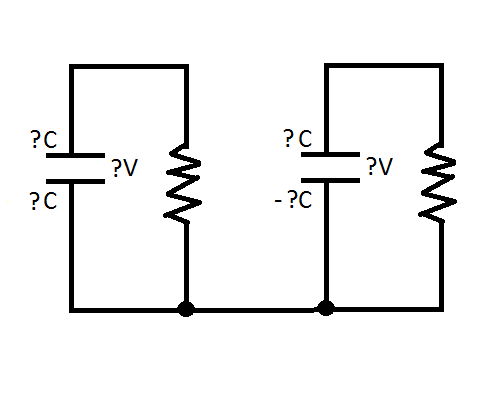 What happens to the 2 voltages and capacitor plate potentials ?

What Wouter van Ooijen said, but also the bottom halves of the two circuits are guaranteed to be at the same potential. You seem to be wondering why anyone would ever care about this.

To demonstrate why this important, go find a stereo or something with an audio plug coming out of it like you'd plug into an iPod or such. Turn up the volume just a bit, and touch just the tip of the connector. Hear that buzz? It's because your body is picking up all sorts of electrical fields from the electronics in your house and nature. These are at different potentials from the stereo, and it amplifies them as sound and you can hear it.

Now, touch all the parts on the plug. Squeeze so you get a good connection. The buzz is gone! Why? Because now you have a common ground. All those fields are still there, but now your body and the stereo are at the same potential, so there's no difference between you and the radio, so you don't hear anything. (Or not as much, anyway. The connection isn't infinitely conductive, so you will still hear something, if you turn the volume up more.)

So, your stereo amplifies the voltage difference between its idea of "ground" and the left and right channels on the connector. But if something (your body, an iPod, whatever) isn't connected to the stereo's ground, then the stereo will be amplifying the voltage output by the iPod and also the difference in ground between the iPod and the stereo, which is likely some crazy random noise and 60/50 Hz hum from powerlines. Giving the two a common ground reduces this difference to nearly zero, so that the two circuits can have a common reference, so they can agree what "4V" means.

For the (somewhat theoretical) case you show nothing different from the not-connected case will happen, in fact nothing CAN happen because there is no (additional) closed current path.

Think of the voltage at any given point as relating to its willingness to accept or donate electrons; if two points have the same voltage, electrons will have no particular desire to favor one direction or the other. If one point has a higher voltage, electrons will prefer moving in that direction to moving in the reverse. The higher the difference in voltages, the greater the preference.

If an electron arrives on either one of a capacitor's plate, it will make every part of the capacitor be much less accepting of electrons (i.e. decrease its voltage). Conversely, every time an electron leaves one of the plates, it will make every part be much more accepting of electrons (increase the voltage). Note that if many more capacitors enter an electron than leave, both plates will have a very large negative voltage, such that electrons will jump at the opportunity to leave.

What is significant about a capacitor is that when an electron enters one plate, it causes that opposite plate's voltage to decrease slightly less than that of the plate receiving the electron. Consequently, if the balance of electrons entering one plate exceeds that of the other, the plate which receives excess electrons will start to have a more negative voltage than the plate which doesn't, but the amount of imbalance between the two plates that is required to achieve that vastly exceeds the imbalance of electrons entering or leaving the device as a whole which would be required to change both plates' voltage by that amount.

Thus, unless there is some effective capacitance or other connection between the left and right sides, the number of electrons that might have to flow between the two sides to balance out their voltages would be vanishingly insignificant.

Next to nothing happens because the connection you have made does not create a circuit, and so current will not flow through it, except to equalize any differences caused by static electricity buildup. Static electricity buildup will appear on both plates of the capacitor: it's an excess or deficiency of electrons in the circuit as a whole. That exchange will not change the charges on the capacitors. Neither capacitor can discharge via the connection to the opposite circuit because that connection isn't a complete circuit.

What the connection means is that the two circuits now share a common reference voltage. Thus now it is meaningful to answer questions like "what is the potential difference between the top of the left resistor and the top of the right resistor".

If you add one more connection bridging the two, then you have a complete circuit. Some current can then flow through one connection and, of course, an opposite and equal current will return through the other.

A "common ground" serves this purpose: to return the currents exchanged by the other connections. It is not a true ground in the earth sense; only a common return that is called "ground" out of hubris.

Which connection is "ground" is just a convention (but of course there are design reasons for choosing a particular connection, rather than choosing arbitrarily!). We assert that the voltage on that network is 0V, and then other voltages are referenced to that.