Is current different across resistors in a voltage divider?

I know that this may seem like a simple question but I want to know whether the currents across the resistors of different values are equivalent.

There is no other path for the electrons to travel but the electrons hit atoms in the resistor material so possibly they are slowed down. 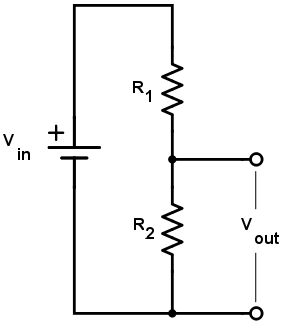 There's no other path for the electrons to travel

This is the correct answer. The same current is going through both resistors.

There is no other path for the electrons to travel

Therefore the current must be the same for every element in a loop -- whether they're resistors, batteries, diodes, or butterflies.

If the current weren't the same in every element, the electrons would pile up somewhere, and since electrons repel each other, they'd find a way to get through.

but the electrons hit atoms in the resistor material so possibly they are slowed down.

It's more complicated than that, but -- yes! It's just that because the current must be equal in every device in the loop, a highly resistive device slows the electrons down for everything in the loop (possibly to the advantage of the butterfly, depending on the source voltage).

Assuming there is nothing connected to the Vout terminals, then yes, the current is the same in both resistors. Also, BTW, electrons do not "slow down".

Intuitively, think of it this way. The mobile electrons have to go somewhere. At two different points on a highway with no exits in-between, all of the cars going past point A have to go past point B. In a simple series circuit with ((any)) number of components of any type (resistors, capacitors, inductors, diodes, whatever), 100% of the current goes through 100% of the components 100% of the time. The nature of the components has a direct effect on what that current is, but all of the energy is "trapped' in the loop.

For a string of resistors, the current is determined by the total resistance of the string. Inside the string, the voltage across each individual resistor is directly proportional to its resistance, per Ohm's Law. As an exercise, draw up a string of four resistors in series with the values of 1, 2, 3, and 4 ohms, connected to a 10 V battery. First, calculate the current through the string, then use that current to calculate the voltages across each resistor, then add up those individual voltages and compare that number to the battery voltage.

A similar thing is true with parallel circuits. With 2 or more resistors in parallel, 100% of the voltage appears across 100% of the components 100% of the time. This time, again using Ohm's Law, the current through each resistor is inversely proportional to the value of the resistor.

Not the answer you're looking for? Browse other questions tagged current current-measurement or ask your own question.

2
What is the current before arriving a resistor and after leaving it in the wire?
0
Direction of resulting I through simple circuit with 2 voltage sources separated by 2 resistors in series?
0
Why is the current in this circuit 100mA?
0
Best visualization of electric current and voltage
14
LEDs no longer bang - or whimper!
0
Question about the statement "Higher voltage means higher velocity of charge"
3
Programmable gain Transimpedance amplifier for 4-5 decade resistance measurement using Pulse voltage/current
8
Do you have to use an instrumentation amplifier to measure voltage across a 0.01 ohm shunt?