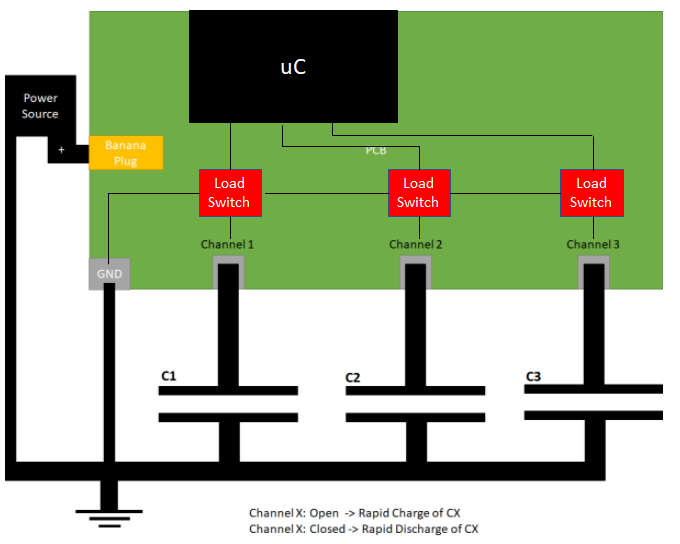 I thought about using a half-bridge as a load switch, but so far I have been unsuccessful at finding a suitable IC. Therefore, I wanted to ask if anyone had done something similar in the past, or could advise me on which type of Load Switch/Half-Bridge to use.

Current in a capacitor can be calculated from the derivative vs time of voltage across it:

If the charger does not use inductive energy storage, instead simply connecting a capacitor to the output of a (presumed) stiff low impedance power supply, then the same amount of energy that will be stored in the cap at the end of charge will also be dissipated in the switch and various resistances in the circuit.

Here E=0.2 Joules which is low enough to not make large things explode. MOSFET semiconductor die are not that large though.

Under high di/dt pulsed current, the inductance of power supply wires will be a larger problem than the output impedance.

But... to charge the cap, the current has to ramp up first, and preferably the ramp-up has to be shorter than the duration of the pulse. Current should also ramp down at the end. For current in an inductor to go from 0A to 4000A in 100ns with 100V across it, the inductor has to be:

This is ironically doable, barely, if the target capacitor has low enough inductance. But it will need a power supply of very low output inductance, which means lots of capacitors charged to a rather high voltage on the board... and capacitors don't discriminate, they'll discharge into anything that makes contact, including you.

Note current in wires creates magnetic fields, and a wire with current flowing through it in a magnetic field will be pushed by a force. With this kind of current you can expect things to jump around, and I wouldn't be surprised if the charged capacitor flies across the room. Whoever catches it will have a bad day.

Honestly this project is going to be expensive, complicated, and pretty lethal. If you say "I am very new to electrical engineering" I would recommend less dangerous stuff... or maybe the thing you actually want to do can be achieved by less "mad-scientist"-ey means.

If the goal is to store energy, then a 1nF cap charged under 20kV also stores 0.2 Joules, and it can easily be charged in a microsecond with a current of only 20 Amps. Obviously, it is even more lethal.

The charge/discharge rate should be in the nanosecond range

To charge a 40 μF capacitor from a source with 50 Ω impedance cannot be done in nano seconds. The time taken to charge the capacitor to approximately 63.2% of 100 volts will be: -

This is nowhere near nanoseconds so maybe you should rethink your requirements. CR time constants graphically: - 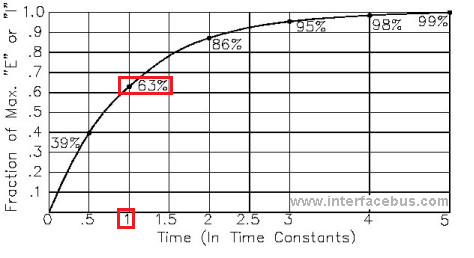 Picture from here and red-lined by me.

To get to 99 volts, it will take about 10 ms; possibly 10,000 times longer than you hoped for. Discharging can be done quickly but, ultimately that depends on the ESR of the capacitor. For instance if the ESR is 1 ohm, then the capacitor discharge time constant is 40 μs. This means you can discharge it to about 36.8% in 40 μs with a perfect short circuit.

You do the math.

Not the answer you're looking for? Browse other questions tagged mosfet capacitor h-bridge load or ask your own question.

4
High-Side Not Working in Half-Bridge
3
IRS2003 half bridge driver
1
A path for capacitor's charging, and another for discharging it
2
Why doesn't AC motor slow down when connected in parallel to a capacitor?
0
How do I interpret BST/SW voltage rating vs BST/GND rating in data sheet?
0
How do the Capacitors get charged in a Half Bridge Inverter?
1
Half H-Bridge Driver
2
Current limiter circuit is damaging MOSFETs