How can a transistor amplify current in a circuit?

At 2:57 of this video, it is said that when we apply a small current to the base of the transistor, a large current is passed through. This is fine, but what bothers me is what he says right after: "If we now manipulate the base current in a certain change, the other current changes proportionally with much higher amplitude"

I just can not understand why it is that variations in the base current should amplify the current through the transistor. If I am understanding correctly, if we apply a current on a transistor, then we simply decrease the size of the depletion region and hence make it more conducting. However when we do this, the transistor didn't really amplify any signal, but rather let more of the current pass through.

So, why is it that we say a transistor is working as an amplifier here? Or am I misunderstanding?

I can understand your doubts - because, in reality, the transistor does NOT amplify the base current. It is true that the collector curent \$I_c\$ is proportional to the base current \$I_b\$ (\$I_c/I_b=\beta\$), but this is a kind of correlation.

(It is really a pity that there are still some books and publications claiming that \$I_b\$ would determine \$I_c\$. Nevertheless, during design and/or analysis of transistor stages we can in many cases treat the transistor as if \$I_b\$ would determine \$I_c\$; this is because the relation \$I_c=\beta I_b\$ does apply - but it is a correlation and does not reflect a causality).

Final (summarizing) statement (with respect to the long list of comments):

The following sentence alone cannot explain the transistor principle, but it shows that it is the VOLTAGE which plays the decisive role:

In every conductor/semiconductor, a current (movement of electric charges) can exist under the influence of an electric field only. In electronic circuits, this E-field is generated by an external voltage. A change of the voltage (of the E-field) causes a change of the current. This is true, of course, also for diodes, bipolar transistors (BJTs) and FETs.

I presume you are just starting out in electronics and, as such, the WHY of the mechanism of a transistor's behavior can be quite intimidating. It's rooted in the physics of how charges work inside the structure that has been created inside the device. If at some point you choose to pursue electronics at a university, perhaps an Electrical Engineering degree program, you will eventually (likely as a 3rd or 4th year student) reach a class named "Semiconductor Physics" or perhaps "Solid-state Physics". There you will learn, in depth, what's going on.

But until that point I urge you to do what engineering student and the vast majority of transistor users do, take it on faith that it works and focus on its higher-level behavior in a circuit rather than the physics of its operation.

If you really want to know this today, I applaud you for your interest and there are any number of resources that you might study to gain an understanding of how semiconductors and ultimately a bipolar transistor works.

Here is a link to an introduction to transistors article that I found that may help you get started:

Here is a short excerpt from that article: 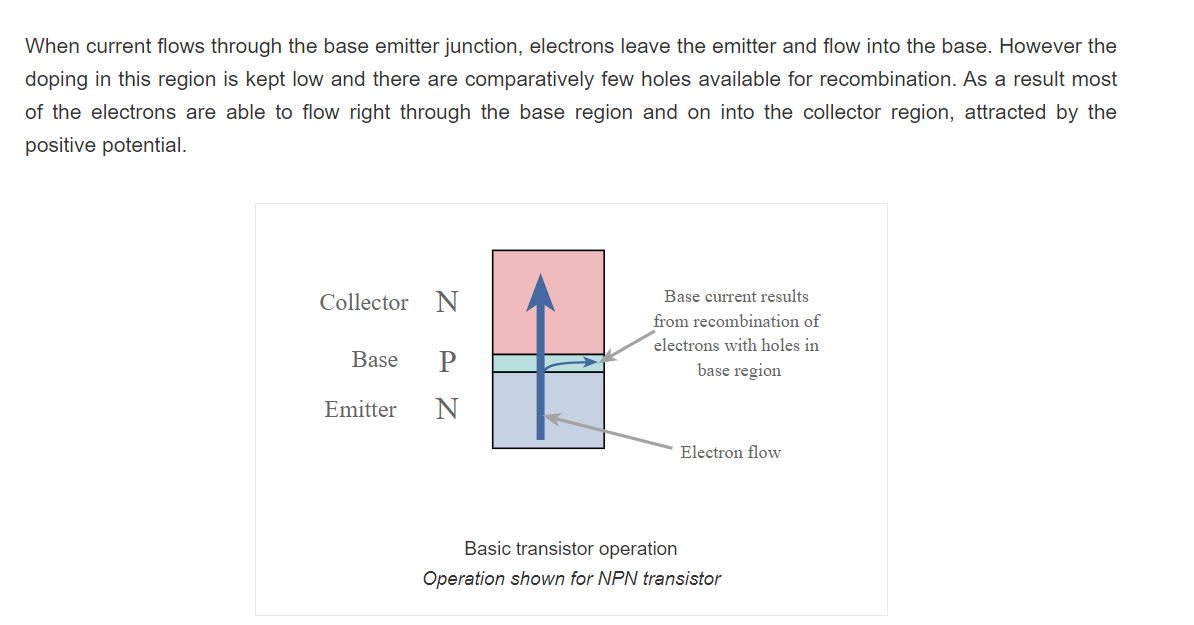 At 2:57 of this video, it is said that when we apply small current to base of transistor, a large current is passed through,

The ratio, large collector current to small base current, stays more or less constant. It's sufficiently constant that we give it a name, β, or Hfe, or 'current gain'. This is the main defining feature of a transistor, it's what a transistor does. If the base current increases or decreases by a_bit, then the collector current increases or decreases by roughly β*a_bit. That, and the broadly equivalent base voltage controlled collector current behaviour, is all that 99% of practicing electronics engineers use in their day jobs.

Don't worry too much about what depletion region is doing until you're ready to take a full course on Semiconductor Physics. It doesn't really help to know a little bit of the story, enough to get you worried and drawing the wrong conclusions

In fact, OP has understood the naked truth about the transistor "amplifier"... that it is not an amplifier at all... on the contrary, it is an "attenuator". At this stage, OP does not need detailed explanations; he needs confirmation of his guesses.

The true amplification is impossible; so there are no real amplifiers. The so-called "amplification" is just an illusion, a clever trick... and the "amplifier" is just a "magic box" where we see higher output power... but this is not the amplified small input power. This is else's power... of the supply source.

In analog electronics, we implement such an "amplification" in the possibly most paradoxical, absurd and silly way - to obtain output power higher than the input one, we get a big power source and then throw away a part of it (from zero up to the whole power). In comparison, in energetics, they can not afford to do it.

I use this approach in classes with my students to clarify such vague definitions of amplifier as "electronic circuit that uses electric power from a power supply to increase the amplitude of a signal applied to its input terminals" (Wikipedia). For example, here is a seminar in 2004, in which we discussed the philosophy of the transistor "amplifier". Another Wikibooks story from 2008 describes how my students studied this phenomenon in the lab in order to reinvent the BJT current mirror.

In 2013, I asked a similar ResearchGate question which provoked a heated discussion. I hope it will be useful to you.

Keeping it in simple terms for the beginners that we all were once...

The transistor is not an amplifier. On its own, it does absolutely nothing.

However, the transistor can be used to build a circuit that is an amplifier.

This is because the transistor not a 'passive component', it's an 'active component' i.e. it requires a power supply to perform its function.

, if we apply a current on transistor, then we simply decrease the size of depletion region and hence make it more conducting, however when we do this , the transistor didn't really amplify any signal but rather let more of the current pass through.

To understand what's happening, you have to apply a little bit of quantum mechanics and classical statistical mechanics. When you apply a voltage to the base of an npn, you do shrink the base emitter depletion region, thereby exponentially allowing more electrons in the emitter to diffuse into the base, which then transit the base and end up coming out of the collector. You also decreased the size of the base-collector depletion region, allowing exponentially more holes to flow from the base to emitter.

The net sum of all of these effects is the appearance that a small base current is proportional to the larger collector current (in active mode). The amount of gain depends on how fast and efficiently the minority carriers (electrons in the base of an npn) diffuse through the base from the emitter to the collector. That's the "base transit time" term you see in bjt equations. The faster that is, the higher beta is.

So it's a little more complicated that just two diodes back to back.