Schottky transistor, Not sure I understand it?

So I've been looking through and going through my Digital Computer Electronics book, and I came to this... It seems so simple and I understand the "point" of it, but I'm not sure I understand exactly how it works.

"In a Schottky transistor, the Schottky diode shunts current from the base into the collector before the transistor goes into saturation."

I guess this part confuses me above ^^^

From what I gather the Schottky Diode has a forward voltage of .25 V... So it's taking .25 V out of the Input Line (coming from the left of the picture) and putting THAT into the collector... So it'll just take less time to switch... Because there is .25 V less coming in the base? Or is adding .25 V to the collector so when the Transistor turns "on" it'll already have a little bit flowing through it (since .25 V isn't enough to actually flow through when it's off?)? Wikipedia entry is confusing. I feel pretty stupid for asking such a simple question lol. 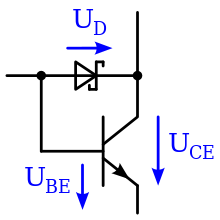 As the base voltage rises, the transistor begins to turn on and it's collector voltage drops (assuming it has a collector resistor or similar current limiting element)

Normally a typical bipolar transistors saturation voltage is around 200mV or less. When the collector voltage, Vce drops below Vbe - Vschottky though, the schottky starts to conduct (now being forward biased) and the base current starts to flow through it into the collector. This "steals" current from the base, preventing the transistor turning on more and the collector reaching it's saturation voltage.
The system will reach a state of equilibrium, since the transistor can't turn on any more without it's base current dropping (you could see it as a form of negative feedback) and will settle just around Vbe-Vschotkky (e.g.~700mv-450mV as opposed to ~200mV)

So, to clarify things, the formula for Vce is:

If we have this circuit and apply a ramped voltage from 0-2V: 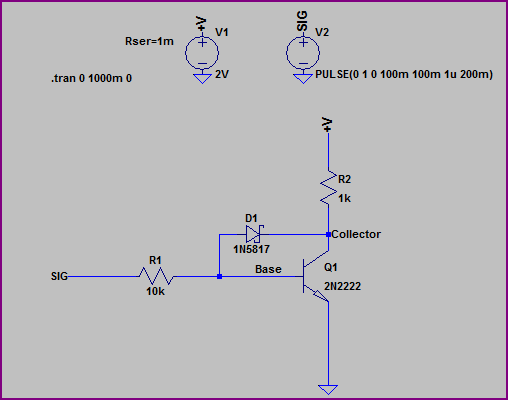 Note that when Vcollector drops below ~700mV, the Schottky begins to conduct and the collector voltage levels out at around 650mV.

If we remove the Schottky, then:

Oli's answer is good on the mechanics of what happens : Without the diode, as increasing base current turns the transistor on harder, the transistor Vce falls below Vbe, until the transistor saturates at Vce=0.2 or even 0.05V.

And with the diode present, as Vce falls below about 0.45V ( 0.7V minus the diode 0.25V forward voltage) the diode will start stealing the base current, preventing the transistor from saturating. (I'm not sure why Oli says this occurs at Vce=0.7V, perhaps he was using an "ideal diode" in his simulation).

But what's missing is the why:

When a transistor saturates, the base region is awash with extra carriers, and virtually no collector potential (Vce close to 0) to attract them out of the base. Therefore when you switch off the base current, the transistor remains conducting for an appreciable period of time before turning off.

Preventing it from saturation in this manner (by removing the excess base current) means it can switch off much faster, while leaving the switch-on time unaffected.

13
Why doesn't shoot-through occur on totem-pole structure?
8
How can I make my PNP amplifier circuit to turn off faster?
13
Transistor S8050 D 331 at 1MHz
6
Which parameters in datasheet give information about a BJT's step response quality?
10
Why is my NPN base so slow to turn off?
7
How fast can a transistor switch?
7
Why does a C4467 transistor turn off slowly when collector-emitter current is low
1
Why are the transistors in logic circuits used in saturation region for ON state?
1
S Bracket Transistors and Reverse Breakdown diodes in Texas Instrument 74LS32 DataSheet?
0
Electronic schematic of 7408 and 7432 logic IC
See more linked questions

2
Why is my transistor ON when charge is only going to the base?
1
does NPN transistor allow current to flow when applying +ve to base from diff battery?
1
Newbie transistor question, trying to understand
2
Schottky diode part of a laser power supply enable circuit
0
Blinking LED with transistor
3
Understand the Joule Thief circuit
7
Adding Diodes to Transistor Astable Multivibrator; 1N5818 Schottky diodes work but 1N4148 diodes don't; can't figure out why
0
Schottky diode leakage / PowerPath sharing