I'm cracking my head at this problem, right now. It is the continuation of the work that I'm doing with this: Relation between group delay, pole frequency and quality factor.

Now I was supposed to design an LC low pass filter equally terminated and adapted to a load of \$600 \Omega \$. I used a normalized table considered a normalization to the -3dB frequency of the filter (cutoff frequency) coming up with the following normalized filter:

Fantastic. Now I need to determine the cutoff frequency so that I can perform frequency scaling and impedance scaling

Well we know the normalized frequency relates to the frequency like:

And using the conclusion from my last question that:

From circuit analysis we come to:

Therefore we conclude that:

Which leads to the final circuit of:

Simulating this circuit I obtained a constant group delay of \$ \tau_0 = 229 \mu s \$, which has like 12% of error which I think is a fair enough result giving all the approximations we did in the calculations.

However the author of the problem for some reason considers \$ \tau_0 = 55 \mu s \$. Am I misinterpreting the group delay? Is there any extra calculation to arrive to this or is it a mistake?

Which indeed, simulating, we arrive with a constant group delay of like \$ \tau_0 = 57 \mu s \$. But why? Is this a mistake from the author? This circuit is far off the original specifications unless I am actually not interpreting them correctly? Can someone help me to verify my work?

Original Tables that I used and their context: 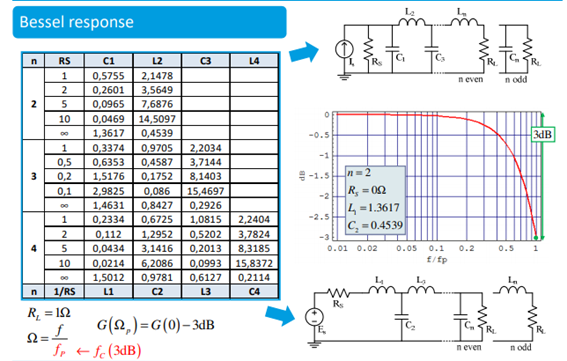 Since there's nothing about the problem you posted, I'll presume you want either a lowpass with 259 μs delay, or a 55 μs delay, and I'll try to give an explanation of how to calculate the filter for a certain group delay.

First, as mentioned in the comments, the Bessel filters have the special property that they approximate a constant group delay in the passband (and a linear phase, implicitly). They are all-pole filters, like Butterworth and Chebyshev type I, but they don't obey the -3 dB attenuation at the corner frequency. Which means that their group delay will be different if any form of frequency scaling is used.

If you spot a golden ratio in there it's because of the roots (3). For this particular case (2nd order), it just so happens it turns out this way. The quality factor remains the same, but the group delay now becomes:

Since it's a quadratic there are two roots, both are real, both give the same results. One with larger inductor and smaller capacitor, and vice-versa. Take your pick. The result is below, where I have slightly offset the traces so they don't completely overlap; the group delays are shown to be the same, and the readings confirm the calculations:

Now, this is the part that gets hazy. You don't say anything about the problem except that it needs to be of a certain group delay, and that the author used a different group delay, and nothing else. I can't know why or why not, but the results for the group delay of 55 μs indeed are a match, if they are to be calculated for a 55 μs delay, not for 259 μs.

Next time either don't use the -3dB tables that you see almost everywhere, or apply the correction beforehand, if you intend to use a Bessel filter for its group delay. Remember this: unity group delay means calculating for a unity \$\omega\$, whatever the attenuation may be; specifying an attenuation means the group delay is off, in which case tables are fine as they are.

This is why, when designing such a filter, one of two things must be chosen: either the group delay, or the ("classical" -3 dB) corner frequency. The most common choice is the group delay. It's not uncommon to choose it for a particular frequency, but then the group delay is irrelevant -- you will get some linear phase, enjoy it while it lasts.

Although the other answer is much more comprehensive (better for school), I though it would be useful to show my lazy-man's way (better for real life) to do an LC ladder Bessel filter in LTspice. First, I'll start with the values from your normalized table, but I'll set up parameters km (for magnitude scaling) and kf (for frequency scaling) for use later. The 2*pi nonsense is there on purpose. Since LTspice typically deals in Hz, it's easier to set up your sweeps if you also see everything in Hz. I'll simulate this and then get the group delay in the passband (see red box) for this normalized filter. One extra thing to note is that I manually right-click on all my inductors and explicitly set the series resistance to zero (it's 1mΩ at default) to make sure these ideal calculations have low error. 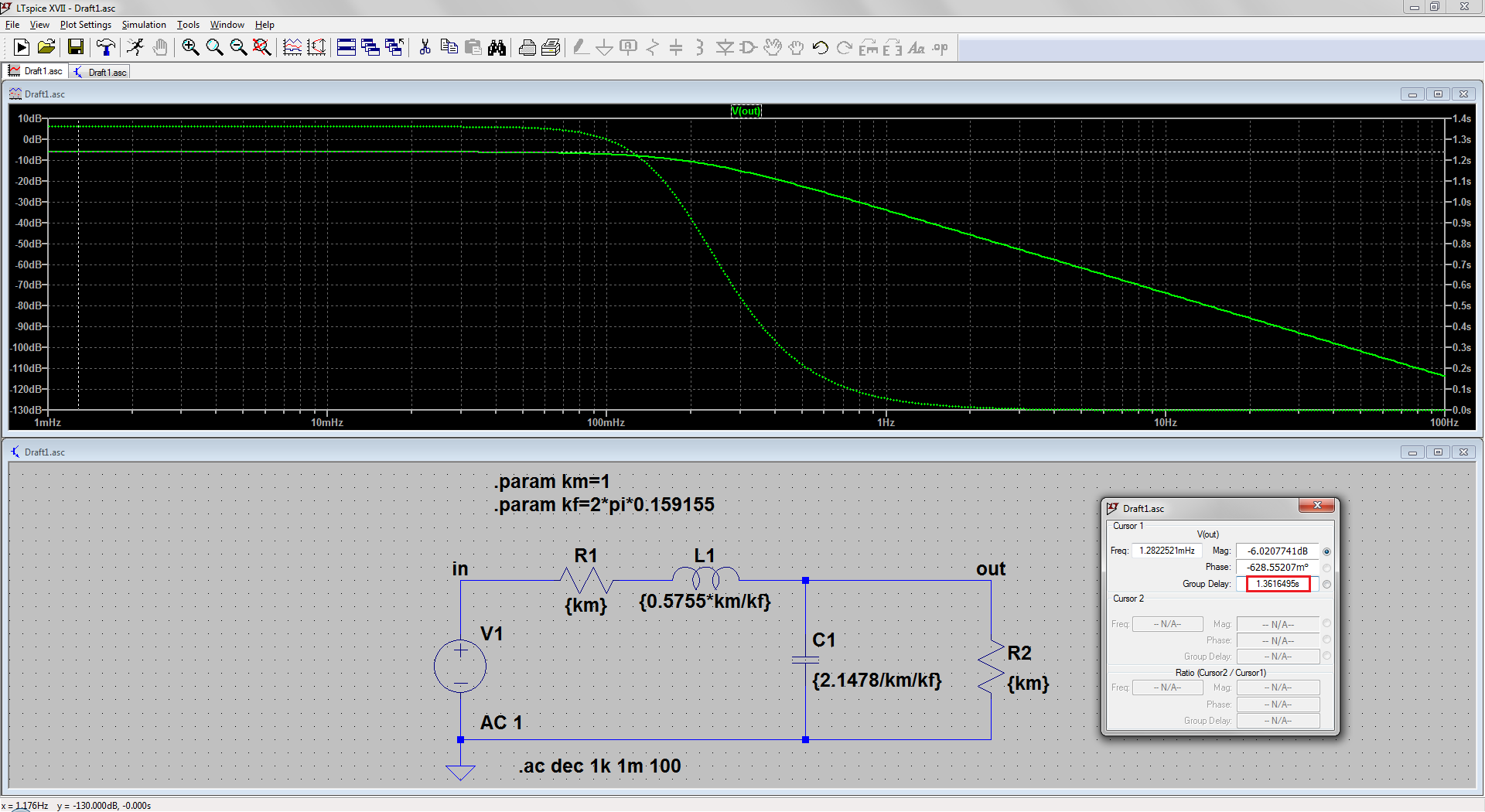 Now, I can take the 1.362s and divide it by the desired group delay of 259µs to get the frequency of 5259 rad/s for my kf parameter. I'll convert this to 837Hz (divide 5259 by 2π) and throw it in my .param statement. I gotta adjust my sweep range first, but then I can simulate this newly scaled filter. 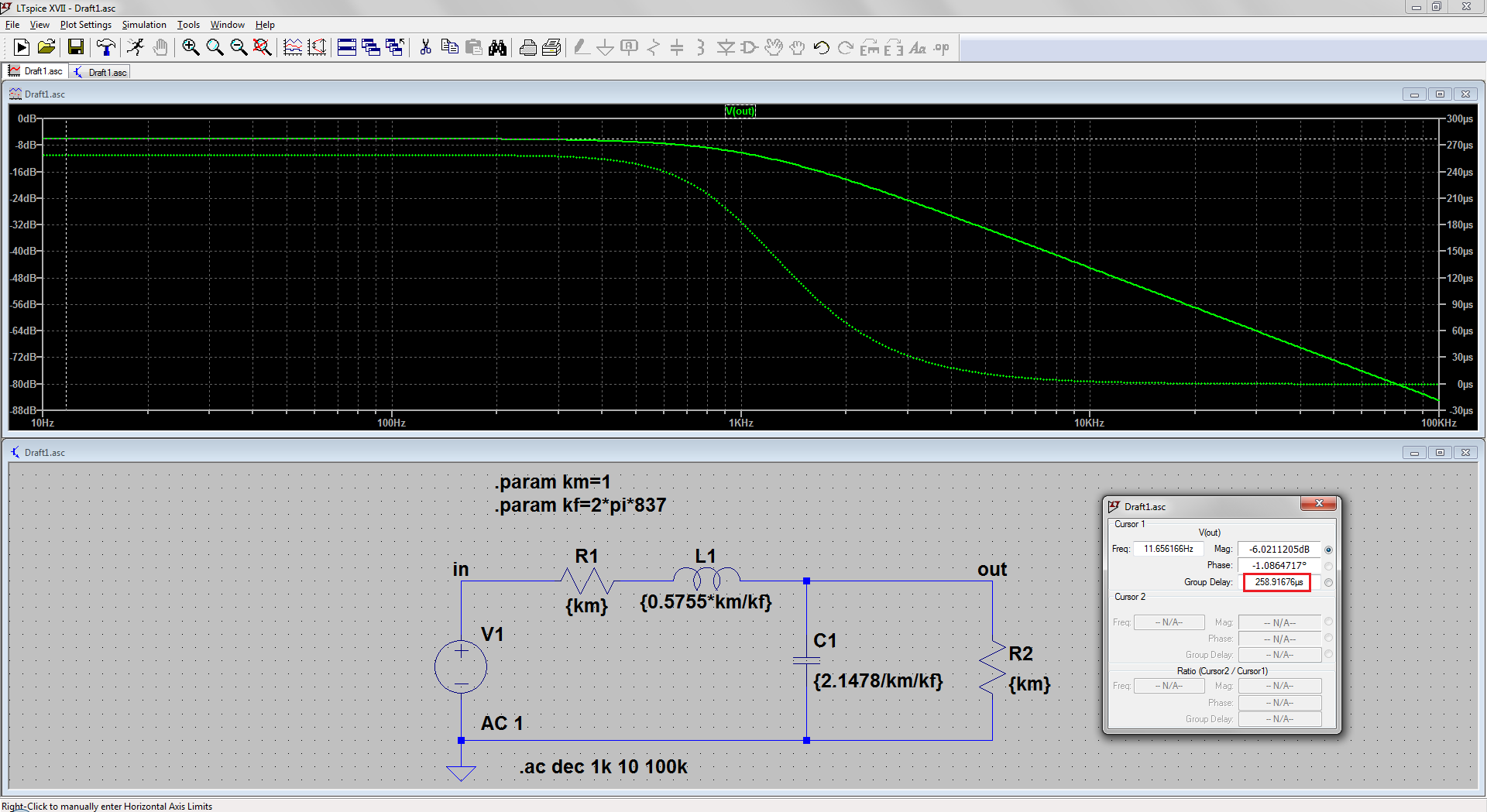 I'll now change km to 600. Even though it doesn't really matter in this example, it's a good sanity check to make sure my equations for the components were entered in correctly. I should get the same exact plot if they were...which I do. 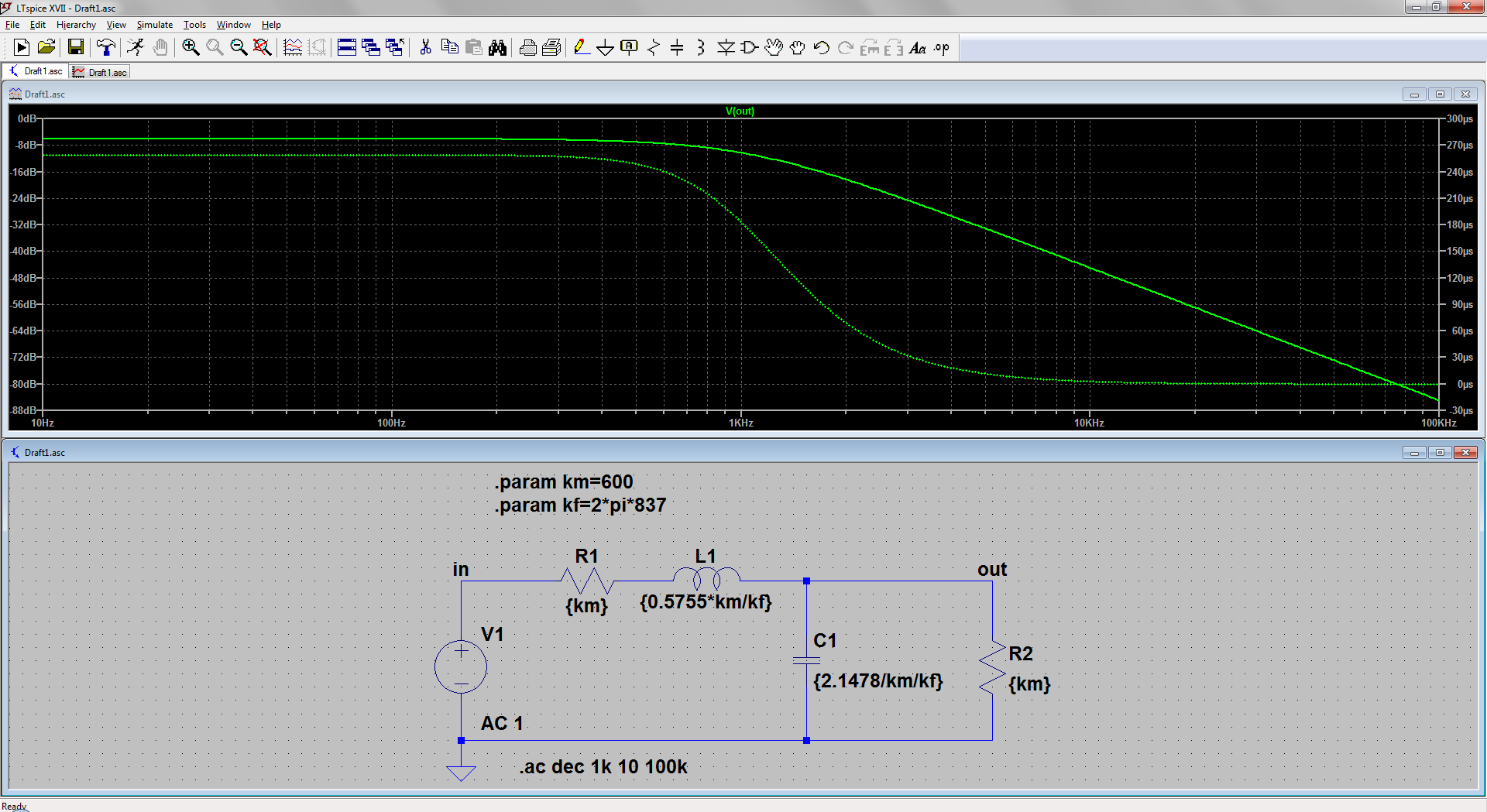 The last thing I do is grab my trusty TI-30XIIS calculator (you can use .meas statements too but I hate them) to evaluate all the component values from the things in braces, and then select real life ones using those calculations. I went with E96 values for the resistor and E12 values for the others. Instead of changing the ideal ones to the new values, I make a copy of the circuit so I can simulate both versions at the same time and compare the deviations. I didn't include the ESR of the inductor in this example, but you can do that for a more accurate simulation. 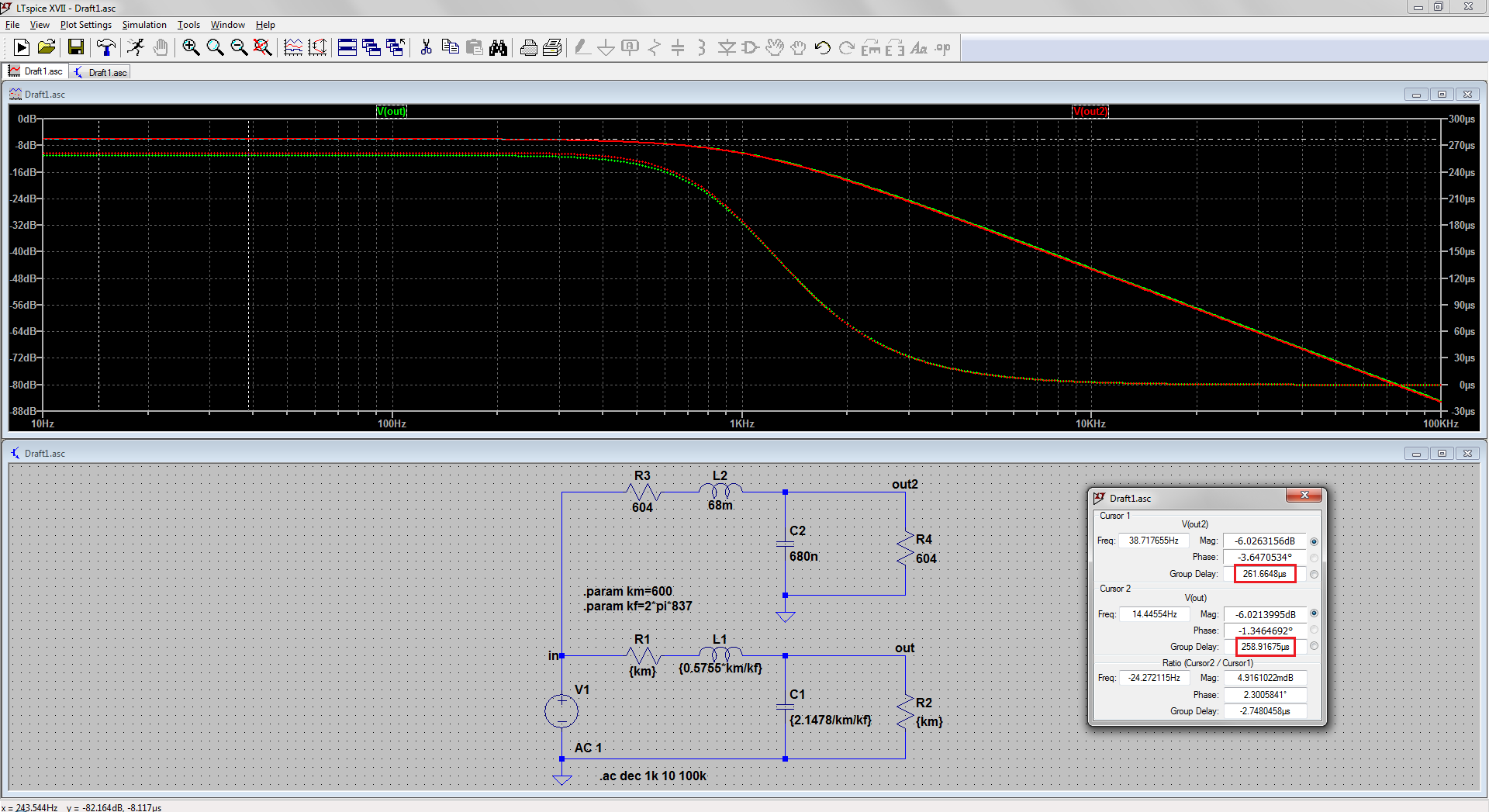 According to this data, my real circuit (assuming 0% component tolerance) will give a passband group delay of 262µs instead of 259µs.

Not the answer you're looking for? Browse other questions tagged analog filter ltspice delay passive-filter or ask your own question.