What kinds of short circuit detection circuits are possible?

I'm trying to make a kid-proof breadboard, and for this I'd like to add some kind of system that would first warn that a short circuit is imminent, and then blow a fuse or similar if the warning is ignored. What would be the best way of doing this?

I'm not 100% sure what you're seeking, but assuming your main concern is the safety of your child maybe just stick with a cheap 9V battery that can't deliver enough current to be likely to cause serious damage, injury or cause fires? Sure they may burn out a LED if they connect it across the battery, but if you limit the current to 10mA there's of course a host of things they won't be able to do and I suspect 10mA of current is enough to blow many semiconductors when the polarity is reversed.

I'd consider things like burning out a LED / transistor / IC etc to be part of the learning process. I know I've fried a few things in my time and learnt from my mistakes, so as long as not dangerous don't see a real problem. Many failures occur in microseconds (or faster) - so some sort of warning system that can be acted upon is not practical.

Take a look at the Smoke tester by DangerousPrototypes. They use a polyfuse and a indicator. When polyfuse is blown — indicator lights up.

Before answering your question, let's agree on what is a short circuit, how it happens, and how it can be prevented.

A short circuit occurs when an unlimited current (a huge quantity of A) moves in a circuit instead of being limited by the electric load. All the components in the path of this huge current will heat, and after some time (usually some ms) one of them will be destructed, interrupting the current.

The short circuit usually happens when the two pins of the normal load -- the one which would limit the current -- are connected together, creating a less resistive path (more accurately a lower impedance) for the electrons. Note that a short circuit doesn't destruct the normal load (which is protected by the connection), but the rest of the circuit. 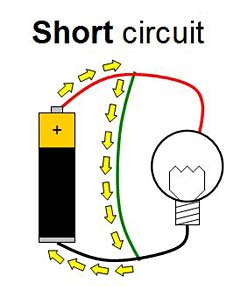 How to detect a short circuit? There are two main possibilities.

One is to calculate what would be the current if two points in a circuit where connected, and compare it with the maximum current acceptable for each component in the circuit which would be created by the connection. This involves simulation techniques and is not practical in your case.

The other is to measure the actual current after the connection has been made and stop it as soon as it reaches some predetermined value. The problem is that there are so many connections possible that you cannot measure the current for any combination, this would need many points of measure, would cost a lot, and would make the circuit very complex. 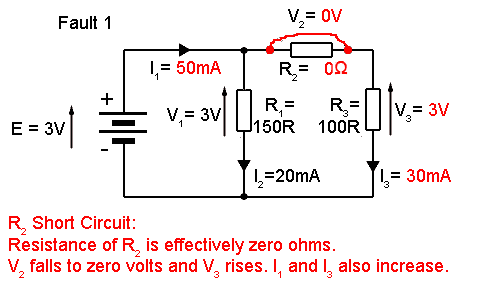 Then we usually measure the current at the power supply location, and the limit will be set for the total load of the circuit. If the current increases past the total load, then something is wrong, we won't know what, but we can stop the electrons supply or limit them to the maximum allowed. This is done by a fuse, a circuit-breaker, or a current limiter.

In many case the maximum current will be sufficient to destruct the most sensitive components, and when the short circuit happens in a way that involves them, then they will be destructed before the protection is triggered. The protection role is only to avoid a fire, hot temperature, and power supply dammages.

Back to you question.

Is it possible to know that a short circuit is about to happen ? No in practical for us mere mortals. This would involve simulation techniques as discussed above.

We can just observe that the current is increasing past the normal one in the whole circuit, and stop it.