I'm trying to make PCBs for the first time, but I hit a roadblock and don't know how to fix the problem.

I etched my 3rd developing attempt, but it looks like only the border around the traces was etched, not the open areas of copper between traces.

Here's a picture of the transparency I used and the resulting PCB: 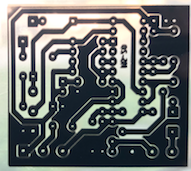 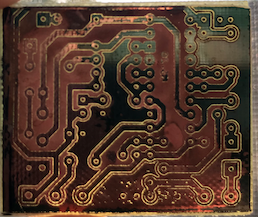 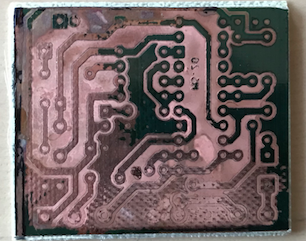 These are the materials and methods I used:

At the end I took it out thinking it didn't work at all, but when I held it up to light, I could see through around the traces, so it looks like the borders etched, but not completely. I tried using a dart point to see if the copper that should have etched would come off, but it didn't. The area that should have etched has a different appearance than the protected traces.

What could have prevented complete etching? I'm wondering if under-developing could have left resist (but then again the borders etched), or if I should spend the cash on ferric chloride etchant. Could the boards have just been bad? There are some kind of textured-looking areas (3rd pic, lower portion).

Edit - problem solved
After trying this again and agitating nearly continuously, as suggested below, I got good results. For the sake of completeness, this is what I did to get a decent result:

I'm suspicious of your etching solution, but I don't think that's the problem in this case.

This sounds like you weren't agitating your solution enough, and the solution over the large copper areas got saturated and couldn't accept more copper. If I'm right, then the reason you got a deeper etch around the traces is because where there was resist, there was a reservoir of fresh solution.

You need to agitate your solution continuously. Like, if the motion stops, you're not doing it right. The technique that I've always used for hand-etching is to rock the etchant tray back and forth, so the etchant gently swishes across the board. You want the etchant to be moving with respect to the board, and you want it to mix, at least gently.

I'm also concerned at your reported etching time. Did you control for temperature? Maybe it's correct for that etchant, but with the ferric chloride that I've used, if you etch at too low a temperature it takes longer (if I remember correctly 30 minutes is way too long) and the etchant will undercut the resist, making the traces rough around the edges and sometimes cut all the way across.

Get an old ARRL Handbook (I know the process is in the 1976 book) and look in the construction section. You'll see a motorized etchant tray under a heat lamp. Take that as a clue.

4
PCB etching troubles. Over etched?
2
signs of complete PCB photo-resist development
0
Use spray paint to make mask for pre-sensitised board?
1
PCB Etching (Negative Photoresist) Issue
1
Etching using Sodium Persulfate, Is my photosensitive board too old?
11
My PCBs etch all bad! (sodium persulfate)
3
PCB etching not working: everything etched
0
PCB Toner Transfer Method - How to remove toner when it fails before etching?
4
Why did the liquid tin evaporate off my board when soldering?
2
PCB etching went wrong or what?