I've build this circuit (that will be part of a more complex circuit): 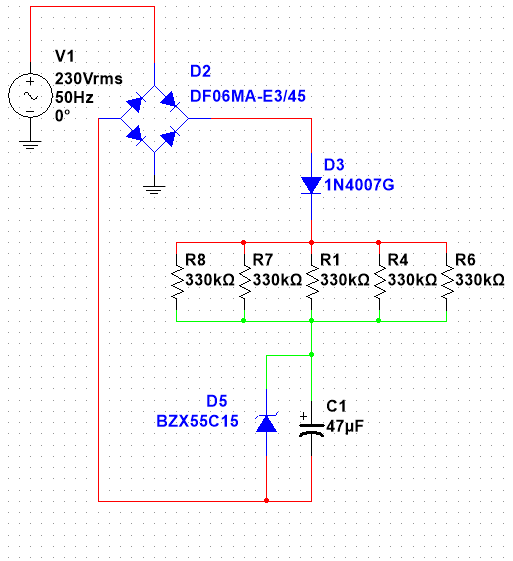 All works as expected and on the zener I have exactly 15 V rectified. Later, one day after, I've discovered that even with the AC power (230V) disconnected on the C1 capacitor there were about 5 residuals Volts. For this reason I've short-circuited the capacitor with the purpose of completly discharge it. This, probably, was my big mistake because after that the circuit stops working and I've discovered that the bridge rectifier was irrimediably broken and shot-circuited. Frankly I don't understand why this it happened and how to improve my circuit to prevent a similar event in the future. Any idea? Thanks in advance.

ADD: Reading all replays an comment I suspect that the circuit is not so good. Neverthless, I've forgetted to say that before that the bridge rectifier broke down, I've connected an oscilloscope probe across the zener and by this way I could see that there was a residual 5V voltage on the capacitor. I don't know if that can explain what is happen...

I've a significant update to my issue.

After I've added the bleed resistor and replaced the fried bridge rectifier, than I've replugged the AC power and all seemed to works fine too.

I've connected the multimeter and all measures are right.

At this point I've connected the oscilloscope probe and puff... the bridge rectifier was fried too.

The oscilloscope is a Tektronix TBS1000C Series, brand new, just purchased and works fine even after the issue described. 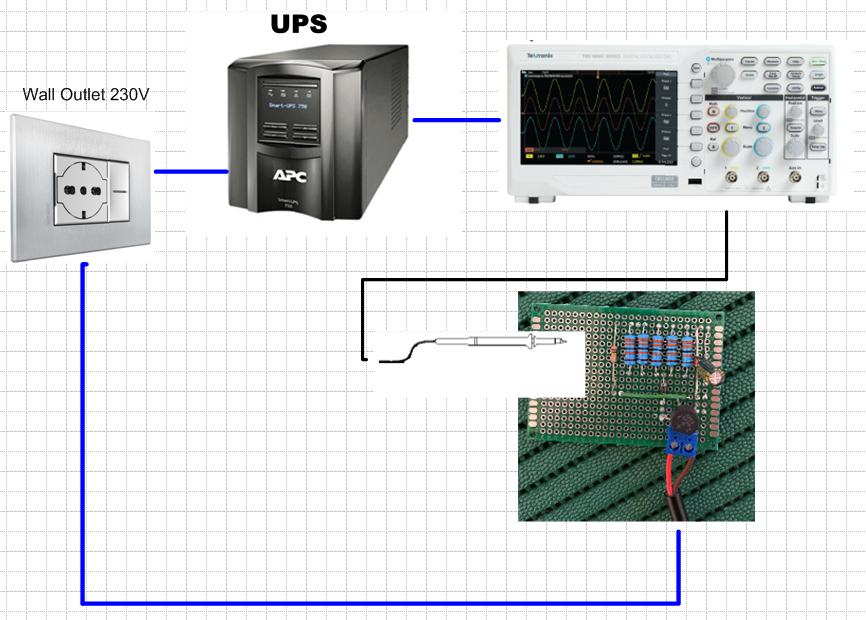 I don't know if this could be the reason of the issue and, especially, why. Any other idea?

This is an equivalent of your setup: 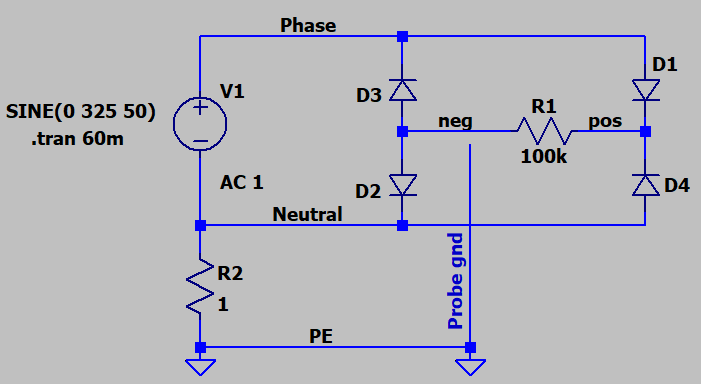 This is a simulation 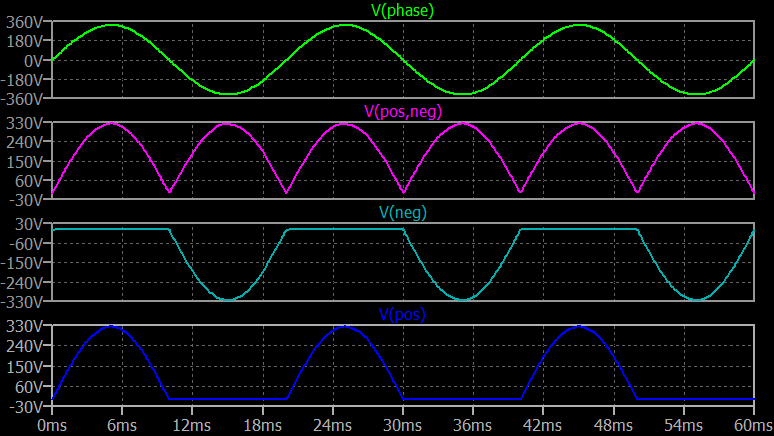 As you can see the location where your did put the gnd-clip goes to minus 324V! Current is only limited by D3 and the resistance in PE and neutral. So no wonder the bridge fused. So the advices of isolation transformers in addition to utmost caution are better taken serious.

If an isolation transformer is applied the circuit would look similar to this: 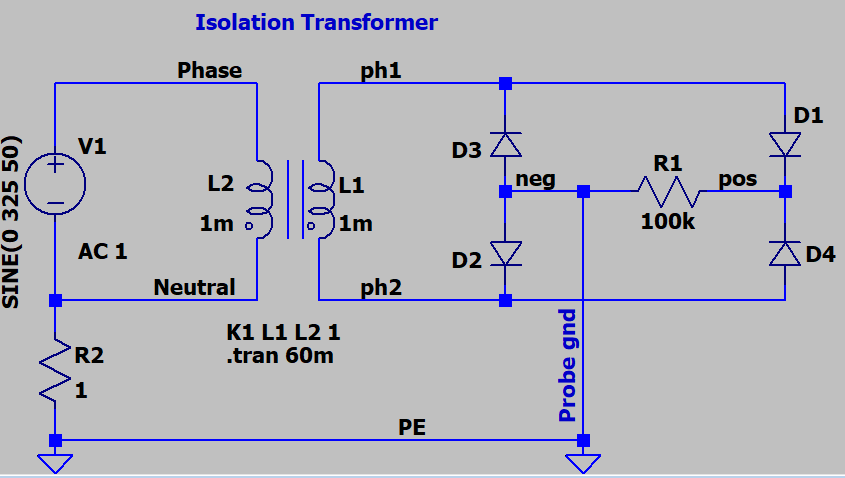 Now the gnd clip can be connected as seen and the simulation now gives: 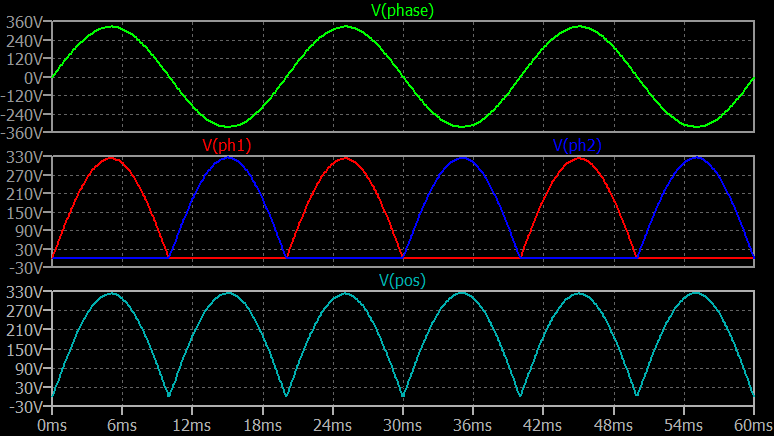 Now the neg terminal is set to 0V (by definition of gnd). Notice that you still have up to 324V on the pos terminal. When ph1>ph2, D1 and D2 will conduct. When ph1<ph2, D3 and D4 will conduct. Finally notice that ph1 and ph2 are each clamped to gnd=neg. I.e. neither can go below a diode conduction drop (1V) below gnd, so there are no large negative potentials.

Here it is an ideal transformer. A real one will have some capacitive coupling from primary to secondary. This will inject a voltage/current into the secondary circuit which you will see if you remove the gnd clip and place the probe on neg terminal.

I am not condoning the construction of this dangerous and inefficient circuit, however if you must, it's better to have the resistors in series with the input. Your D3 is doing nothing of value so lose that.

So the voltage across the bridge is reduced and any mains transients (which could destroy the bridge) will appear across the resistors. The resistor should be of a fusible flameproof type rated for appropriate mains surge voltage (kV not just hundreds of volts).

Better yet, as this circuit can cause lethal shock or cause a fire when inappropriately designed, constructed or used, just don't do it.

If one makes test measurements in a circuit which is galvanically connected to the mains AC outlet he should feed the circuit under test through an isolation transformer. Get one if you do not already have it. Electronics repair workshops have it installed in their working desks.

Assuming you had a low ESR cap and used the Gnd path that allowed current thru the diode bridge to discharge the cap a surge would occur. Yet the bridge is rated for 1A and 50A for one cycle so it seems unlikely to exceed spec. A better way is to add a 100k resistor across permanently. So the root cause of failure is unknown.

Not the answer you're looking for? Browse other questions tagged capacitor bridge-rectifier or ask your own question.