I have a couple of FPGA setups to capture images from an Aptina/ONSemi MT9P031 sensor. I've done this in the past with no issues but now I have a strange problem.

I have a bit of scene dependent noise that follows along with some contours of objects that can be seen in the image. Will attach an example, you can see a ring of black or white pixels surrounding the lit-up button on the pictured equipment, and similar garbage on the text or edges of the other buttons. 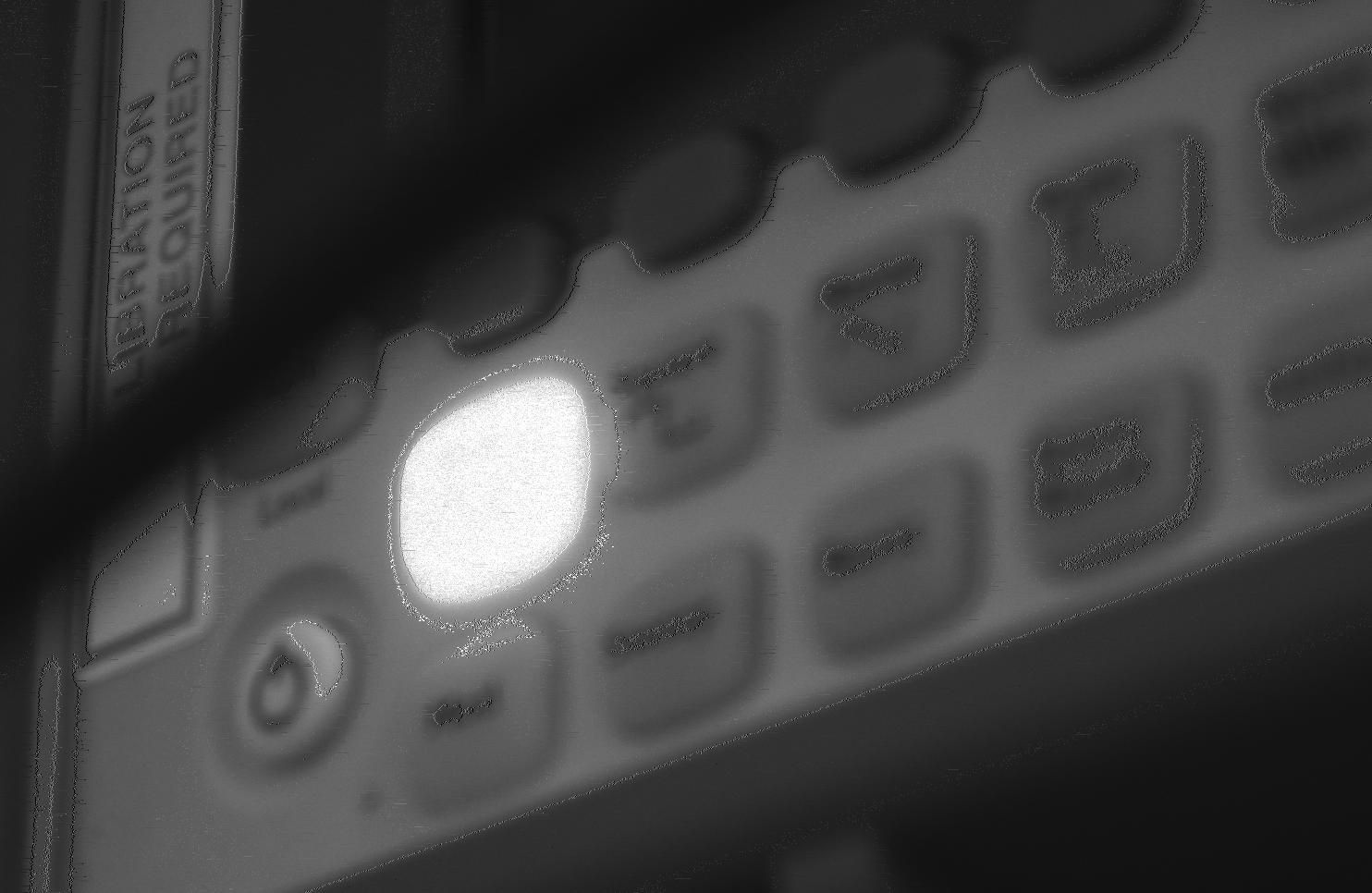 A couple of REALLY weird things about it -- if I use a Salae logic analyzer, connected to some soldered pins on my board that are on the traces between the camera and my FPGA, it can actually capture a perfectly clean image without this noise. I would have thought if anything this should be worse because it's going off-board across some extra flying leads and at the end of the day the Salae logic is another FPGA.

Two reasons why I don't believe the problem is in my external memory that I use to store the image. One, if I replace pixel data with a test pattern driven by the camera's pixel clock, it comes across perfectly cleanly. I also observe the same effect with the same camera attached to a Cypress FX3 dev board and no FPGA in between.

I've also tried doing what the Salae does, sampling both the pixel clock and data on a faster clock and just looking for the edges in the pixel clock, but the result is the same. I have a hunch that this has something to do with too many bits on the parallel bus trying to change at one time, but it's really curious that the logic analyzer doesn't have the same problem. Anybody have any ideas on this by chance?

So it was actually an issue with my memory controller that was solved by decreasing the memory clock frequency.

I thought the memory was working totally cleanly because I had used it on a previous project and it responded well to various gradient test patterns. I was able to see that there was some sort of issue by changing to a test pattern that was more aggressively railing between black and white.

I was really thrown off by that noise following the contours of what was in the image, that really suggested sensor rather than memory in my mind.

Not the answer you're looking for? Browse other questions tagged fpga image-sensor or ask your own question.

7
Why not SRAM for FPGA in image processing?
4
How to best “synchronize” image producer/consumer to handle different FPS?
0
Curious noise on FPGA Microcontroller connection
1
Avoiding crosstalk between makeshift wires
7
Do I need to reset my FPGA design after startup?
0
Synchronizing two OV7670 image sensors
4
FPGA - synchronise “very close” clock from signal
0
What timing constrains would I need to set for a handshake based clock transfer