Why must the voltage drop over resistors in parallel be the same?

I am wondering why it is the case the when resistors are connected in parallel the voltage drop over them must be the same?

Except when one is being precise, that is a fairly good explanation.

[It sometimes is the case that the work done is different depending upon path. In particular, when there is a time-varying magnetic field involved. We will get to that. But first:]

If there is no time-varying magnetic field, this implies that

V, being a potential function implies that the work done to move an electron from one point to another does not depend upon the path taken. That is why the voltage across two resistors in parallel are said to be equal. And, this is true whenever there is no time-varying magnetic field present.

[However, if there is a time varying magnetic field affecting the circuit, one needs to model this as if there were a transformer, or voltage source, present in one or both of the paths through the resistors. The voltages induced by these transformers will affect the voltage "dropped" by each of the resistors.]

I think you're over-thinking this.

Here's how the voltage across two resistors in parallel is measured:

Since R1 and R2 are in parallel they are each connected between the same nets, net A and net B. That means both R1 and R2 experience the same voltage, that is the voltage between those nets. The voltmeter also experiences that voltage and displays it as well.

I prefer to compare voltage to "pressure", in the case of parallel resistors, the voltage (pressure) on both is the same.

In an ideal wire with 0 resistance, the electric potential is the same everywhere in the wire. In other words, the voltage between two parts of that wire is 0. This is a direct consequence of Ampere's Law (or alternatively, Kirchoff's Voltage Law). 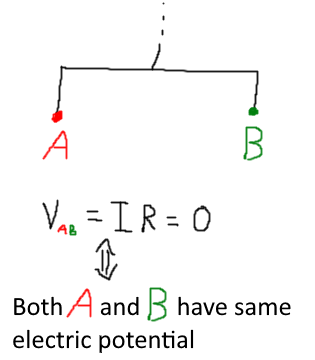 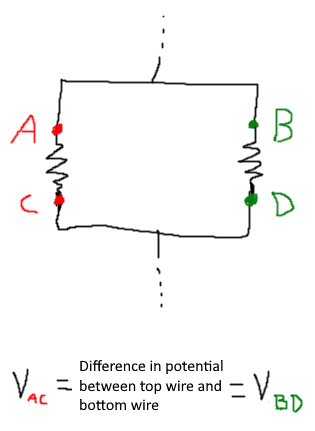 Not the answer you're looking for? Browse other questions tagged voltage circuit-analysis resistors or ask your own question.

2
Voltage drop across a single resistor and across two resistors

1
Resistors in parallel?
0
If resistors do not decrease flow in a circuit then why are they able to make things like an LED short when otherwise it would without the resistor
1
Find the voltage drop across each resistor in the circuit
1
In a DC circuit with one battery and one resistor, why does the voltage drop remain the same irrespective of the value of the resistor?
3
Intuitively, why does voltage drop across a series circuit?
0
Proving the formula for parallel resistors
0
Voltage across different resistors in a series circuit containing just voltage source, resistor and ground measures the same
3
Why are these resistors between different nodes assumed to be parallel
0
Confusion about voltage drop