How does the 4th satellite in GPS know the time offset?

Going through the working of GPS technology, I came to know that at least 4 satellites must be visible to solve for the location with considerable accuracy. Going through most of the resources, I can visualize how three coordinates of the location are determined.

If we talk about the differential GPS, the actual base station's location is compared against the GPS determined location and the timing offset is calculated and transmitted to the receiver within certain coverage area. But if we talk about direct communication between the satellite and my mobile phone, the actual position is to be determined unlike the base station where it is already known.

Hoping for a clear and more visual answer (rather than mathematical) from this community as always. Thank you!!

So, you really need to re-visit what you've learned about GPS so far!

Regarding the timing offset estimation: Don't consider the timing as a separate thing from the position. Instead, consider the 3 dimensions of your location and the time as one estimation problem with 4 unknowns.

All you get from your satellites is the time it was when they transmitted a signal. Your receiver hence only sees a time difference of arrival between these four. Only after solving the equations that gives all four unknowns by inserting all four time differences can you answer any of the questions of "how far North am I? How far west am I? How high am I? What is the time?", and you can answer all of them. So, it's either "all" or "none", not "location separately from time".

Although there are multiple timing offsets in the context of GPS operation with some of these parameters being measured and the others calculated, most probable you are talking about the timing offset of the receiver clock relative to the GPS time.

But the precision of the commercial receiver's clock is insufficient to get any meaningful result for the receiver position calculated in this way. In practical implementations, the receiver coordinates and the "precise" time at the receiver are computed in one batch by solving the navigation equations. By the "precise" time data at the receiver, I mean that the timing error is that small as if this data is read from the clock having a precision comparable to that of satellites' atomic clocks. Technically, there is a parameter called GPS time, a synthetic value maintained in the GPS control segment, and the purpose of solution of navigation equations is: in the user segment (receiver), to get to the timing precision comparable to the GPS time precision.

The navigation equations are nonlinear, and can be solved by analytical or numerical methods. The pseudoranges (TOFs divided by the speed of light) are used in both analytical (closed-form) or numerical (iterative) methods.

Let \$r_x, r_y, r_z\$ are the receiver's coordinates (unknowns); \$r_t\$ is a true reception time, also unknown. Notice that a character \$r\$ in \$r_{...}\$ variable designations is used to indicate that these parameters are representing the receiver's variables.

The values \$s_x, s_y, s_z\$, the satellite's coordinates, and \$s_t\$, the time when the message is sent from the satellite, are calculated using the data decoded from the received message. These are the known coefficients of the navigation equations. Notice that the \$s_t\$ value is measured in GPS time scale, GPS time is considered here to closely approximate "absolute time".

The receiver clock is necessary to implement a sequential logic of decoding navigation messages and keep track of telemetry and handover words and other data. Even if one chooses to solve navigation equations in closed form, one still needs the receiver clock in hardware, in the user segment.

To actually improve the position and time detection, the navigation messages from multiple (more than four) satellites can be used, if available. With more than four equations, the system is overdetermined and best-fitting solutions must be sought.

In some applications, the receiver can detect the position with only three satellites in sight, using an additional constraint of the receiver elevation received from the additional data source (a reference data of Earth's ellipsoid and topography) or alternative sensors.

Back to the pure geometrical problem with exact measurement data: the system of quadratic equations has two solutions. Two loci satisfy the navigation equations. For the receivers located at the Earth's surface and in the near-Earth orbiter, the criterion separating the real and the spurious solutions is evident.

To select the right solution of the two introduced by the quadratic form of navigation equations, one more independent equation must be added to the set of navigation equations, so that the number of reference points in the multilateration problem becomes equal to the space dimensionality plus one. For example, when we calculate the position of the point on a line (1D), the distances from the two fixed points of this line must be given, because we need to differentiate between two points located at equal distances but in opposite directions from the origin. Both these points satisfy one quadratic equation of one-dimensional problem, if we have only one reference point.

Similarly, four non-coplanar points are needed for the uniqueness of the solution of the multilateration problem in three dimensions.

Viewed as the geometry problem of finding the unique solution, the global positioning system requires five reference points (satellites), because four variables (three coordinates and time) are to be found, and also the square root sign ambiguity of the quadratic equation solution must be resolved. Only because the spurious solution is usually far off the near Earth space, four satellites suffice.

For excellent visuals, see Multimedia sections of https://www.gps.gov, https://navcen.uscg.gov/, Wikipedia articles on GPS/GNSS, and websites of engineering schools, for example of the University of Colorado, Boulder.

We measure some time difference of Δt when receiving the signals. This means that the signal has travelled Δt * c (c is speed of light) longer from one satellite than the other. The coloured circles in the picture represent the signals from the satellites at different distances with the circles being Δt * c larger on the satellite whose signal was received later.

We now know that our receiver must be somewhere on an intersection of one pair of the circles, i.e. on the black curve (which is not actually a straight line).

Now what if we add a third satellite? It should be fairly clear that we are then left with only two possible points, one of which we can rule out by deduction (i.e. we're probably closer to the surface of the Earth rather than in outer space) or by including one more satellite. Also then we'll know the exact distance to any of the satellites and we can compute the exact time the signals were sent.

It's pretty easy to imagine how this works in three dimensions. You just need one satellite more than in the 2D case, which gives us the four satellites. Or five, if we can't otherwise rule out the second solution. 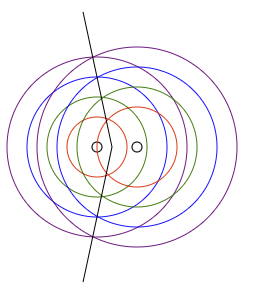 Not the answer you're looking for? Browse other questions tagged gps error time satellite or ask your own question.

42
How do GPS satellites refresh their clocks

6
How does GPS calculate time
1
How does GPS detect coordinates?
8
GLONASS and GPS satellite usage simultaneously by Positioning Modules
0
Reducing GPS coldstart if we know where the user is
2
GPS time accuracy (SIM808 or similar) - process between NMEA sentences and AT command response
2
Clock of GPS receiver
3
Can anyone explain Phantom Power and, specifically, how it's used in satellite television systems?
4
How does satellite TV get through in rain?
1
How were GPS satellite precisely positioned?
0
Why don't the GPS equations account for receiver clock drift?