How should I probe when measuring output impedance? Why do I get inconsistent readings?

I am trying to measure the output impedance of a commercial headphone amplifier, but the results seem to change depending on how I probe it. When I plug a 1m cable into the device and the other end into an adapter to a terminal block on a breadboard, I get 5.5Ω, when I use a shorter cable I get 4.4Ω. The results also change depending on where I'm measuring the voltage on the breadboard.

I'm connecting the terminal block to the amplifier, playing a 1kHz sine wave and measuring the voltage with and without that resistor across (I put the resistor into a terminal block because I have to unplug it many times), then calculating the impedance as Z=R*((V1/V2)-1). My measurements seem to be pretty good, I even did all the uncertainty propagation maths and it ends up being around ±0.6Ω, after doing 30 measurements at different voltages (also tried a few with different resistances and frequencies just to see what's up). The only problem is that I got a different, but equally accurate value when repeating everything the next day (including building a new setup with slightly different cables and connectors), and it's outside of the previous day's measurement's error bars.....

Am I not accounting for some other source of impedance? The cable, or the connectors maybe? What am I missing, and what's the proper probing technique for a measurement like this?

I have now opened it up and I'm measuring directly on the PCB: 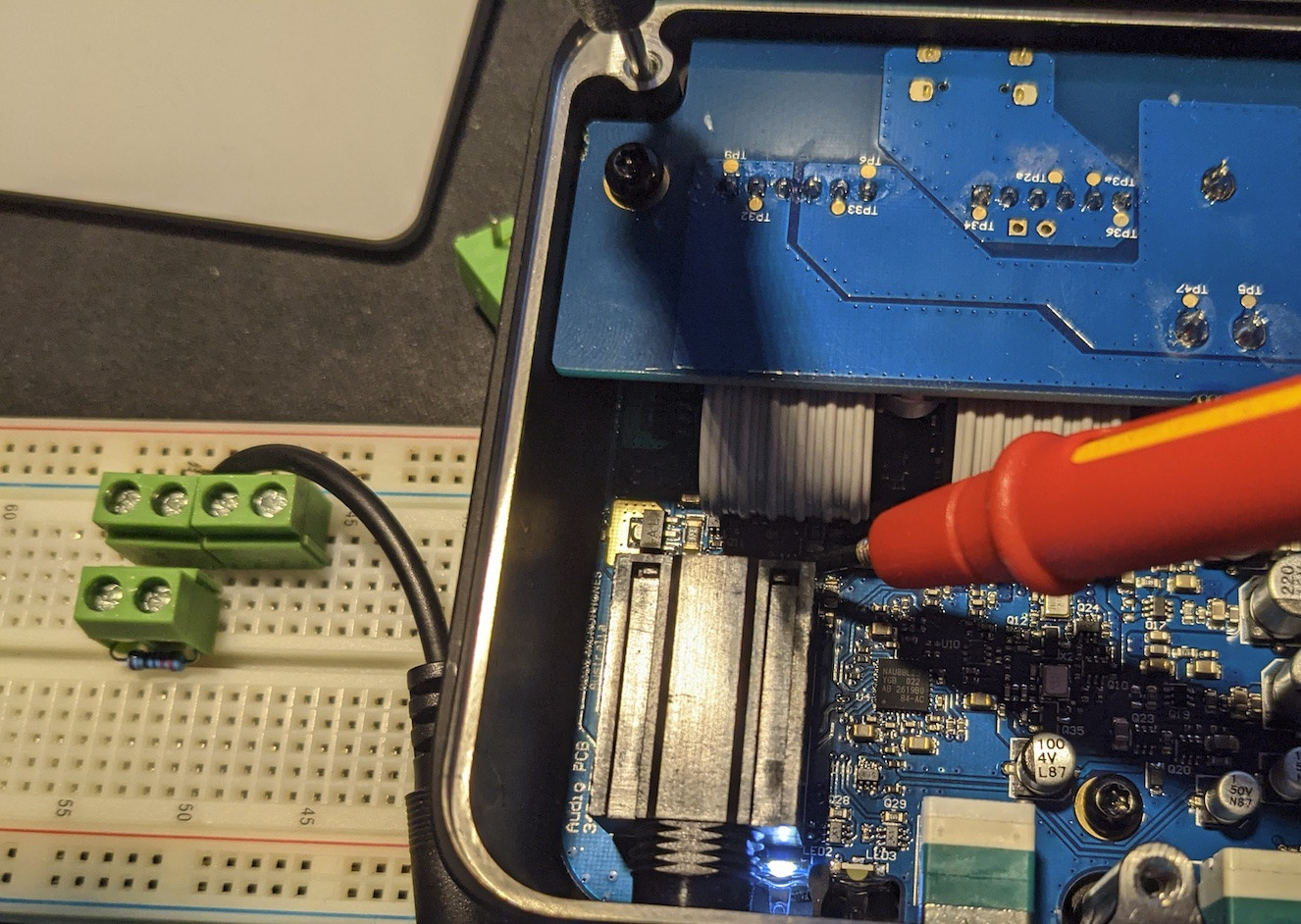 The result is closer to my second attempt (seems to be a bit lower even, but I only did a couple of measurements). I still don't have a lot of confidence that I'm measuring the impedance correctly, but at least now I understand that I have underestimated the effect of the series resistance on the voltage under load.

Cheap solderless breadboards have a lot of contact resistance. It can be 0.5 ohm to 1 ohm per connection. I am defining a connection as a wire or pin contacting the breadboard. I count 4 connections in your setup.

The contact resistance is not constant, but can vary based on the exact position of the inserted wire.

As a test, replace your resistor with a wire and measure the resistance between the top terminals in your picture. Short your meter leads and subtract this reading.

Output impedance of a good power audio amp can be a small fraction-of-an-ohm.
Resistance of wires and jacks/plugs to headphone element can easily dominate. The contact resistance between plug and jack can vary, making measurements annoyingly random.

Measuring output impedance at the power amp printed circuit board is a good starting point, and should yield a repeatable result. Power amplifiers might employ negative feedback to improve distortion, reduce output impedance. If so, output impedance may be frequency-dependent...a test frequency of 100 Hz may give a different result than 10 kHz.
Error in your measurement is least when you test with a small-value load resistance, provided that you use proper probing technique (below). Headphones are often rated as "32 ohm". The amplifier may be rated for "4 ohm" or "8 ohm" load. Be sure that test sine wave level is set for undistorted output - your measurement will be meaningless if the peaks are clipped.

The output impedance of an audio amplifier is more of a design parameter than an actually measurable value.

In the general case, it is in the mOhm range because of the deep negative feedback employed in the amplifier. Depending on the feedback peculiarities and the frequency, this small impedance may as well be negative or a complex number (yes, it is pretty much possible that you get somewhat higher output with the load attached). It may as well be somewhat non-linear (that's how the harmonic distortion may be modelled).

The parasitic impedance of the cables, connectors, etc... combined is usually way more than the real output impedance of a modern audio amplifier.

This assumption is generally true for amplifiers that lack the deep negative feedback present in modern amplifiers. E.g. vintage, tube-and-transformer-based ones.

On the other hand, if you have a tube based amplifier, you are not expected to run most of them without a more or less matched load (you can pretty much kill the output stage without a load).

Conclusion: don't measure the output resistance the way you do. You will not get a meaningful result, and you may get a very unpleasant and expensive result as well.

Not the answer you're looking for? Browse other questions tagged audio impedance measurement or ask your own question.

0
Help understanding onboard power supply measurement test connections
4
Is there a technical reason not to use RCA jacks for speaker connections?
2
How does this impedance matching circuit work? How to simulate it correctly in SPICE?
1
Increase headphone impedance using resistors
1
How to take resistance reading when value is effected by measurement?
0
Impedance/capacitance measurements
0
Debugging a SA 90.4 800W class-D audio amplifier