What is the meaning of "longer electrical length = more wavelengths"?

Reading a Keysight-note, not sure what is the following selected line means? I read and understood the meaning of electrical length, how it is related to bit in flight and wavelength is not clear.

Let's first take a look at what happens in a long cable with a severe impedance mismatch at the far end: 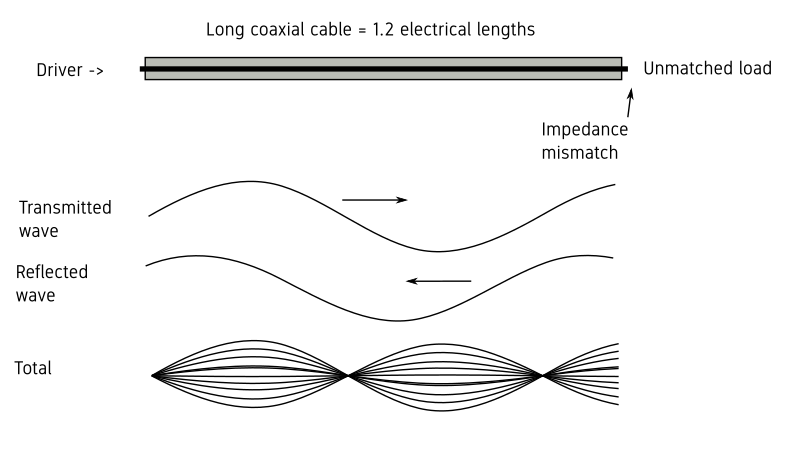 The transmitted wave reflects at the impedance mismatch, and the reflected wave adds up with the transmitted wave. Depending on exact length of the cable, the location and the size of the mismatch, the waves add up to either a slightly distorted signal or to a full standing wave behavior I've drawn here.

With careful design and control of the cable length, the reflection can be taken advantage of, such as in quarter wave impedance transformer. However, normally we want systems to work the same way independent of the exact length of the cable. To achieve this, proper termination must be used to avoid distortion due to reflections.

But, what happens in a short cable? 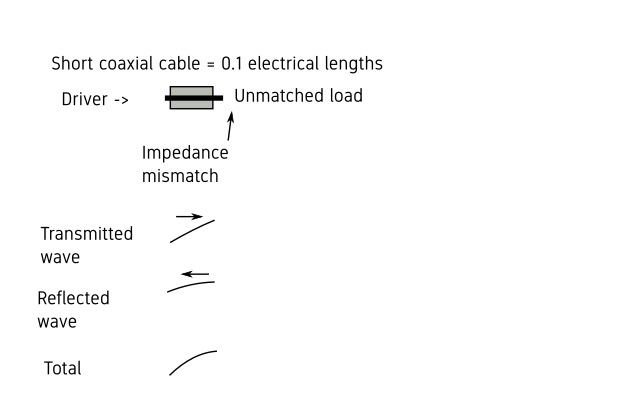 Because of the short length, the phase of the reflected wave is almost the same as the transmitted wave. Thus overall distortion remains low, and there is little effect from the impedance mismatch.

The document also mentions intersymbol interference. This applies to the data transmitted, and relates to how many following bits can the reflection from a single bit disturb. However, I would assume that in most protocols it makes little difference whether the noise is from the previous bit, or a bit that was 5 bits ago.

You can stuff more identical sticks end-to-end into a pipe if the pipe is longer. Then if you whack one end of the pipe it disturbs more sticks since there are more of them in the pipe.

This might be referring to mm or cm bit rate wavelengths where path lengths can exceed 1 wavelength. (Many) The reflections will affect more bits than 1. e.g. Optical or Gbps rates. So impedance matching is critical.

This is referring to the symbol wavelength rather than the carrier.

As the length of the line increases, more waves are moving along it.

Think of a stretch of road that has, on average, 10 vehicles/km. A 10 km sectikon would have 100 vehicles in transit.

Remember that the wavelength is a length, measured in meters. For a wave with a period of \$ T \$ and a velocity \$ v \$, the signal travels \$ \lambda = v.t \$ in one period.
Thus if you increase the length of the medium (the 'electrical length'), you'll get more repetitions of the electrical signal, i.e. 'more wavelength'.

Not the answer you're looking for? Browse other questions tagged transmission-line signal-integrity bit-rate wavelength or ask your own question.

13
Why does reflection off a PCB via look like this?
1
Confused regarding standing waves on transmission line
0
In ADS, how can I change the electrical length on a transmission line to depend on the frequency sweep?
0
How do I calculate the length of a transmission line?
1
Standing waves feedline length and dipole antenna feedline
0
Why does the length of the wire matter to the value of the pull up resistors?
0
Why dimension of antenna's elements can be 1/2 and 1/4 or wave length and what about 1/3 or 1/8?
3
Rise time and clock frequency: when does it start biting me?