I am working on writing a control program for my pellet smoker. I am having an issue with the meat thermometer that came with the smoker.

I only have the 2 internal wires that actually connect to the thermistor connected to my ADC. The third wire (thermistor sheath/cable sheath) is not connected to anything. If the thermometer is sitting on the grill or on my desk I am able to get an accurate measurement from the ADC. However, if I pick up the thermistor or touch it more than just lightly brushing it I instantly get an overvoltage/undervoltage error on the MAX31865 ADC that doesn't go away until I put down the probe.

I assume I need to ground that third wire by clipping it to a metal surface on the grill or back through the power supply, but I am trying to understand what is happening here. I tried measuring for a voltage drop/increase while touching the thermometer and I couldn't see anything happening when measuring with a multimeter, and I don't understand why it would be a problem anyway.

(I am not an electrical engineer, just a hobbyist.)

Image of how it is wired I put together before I started. The black triangles go to a strip of copper on the solderable breadboard. The empty triangles go to a different strip of copper, and then the grounds are merged to a single ground pin on the Raspberry Pi. The small black boxes are ferrite beads. I pretty much just followed exactly what the Max31865 docs said, but since I had a single power source I split it with a ferrite bead between the source and the analog voltage input.

I used a 350k Ohm reference resistor because the thermistor has a resistance of around 300k Ohms at 0 degrees celsius. 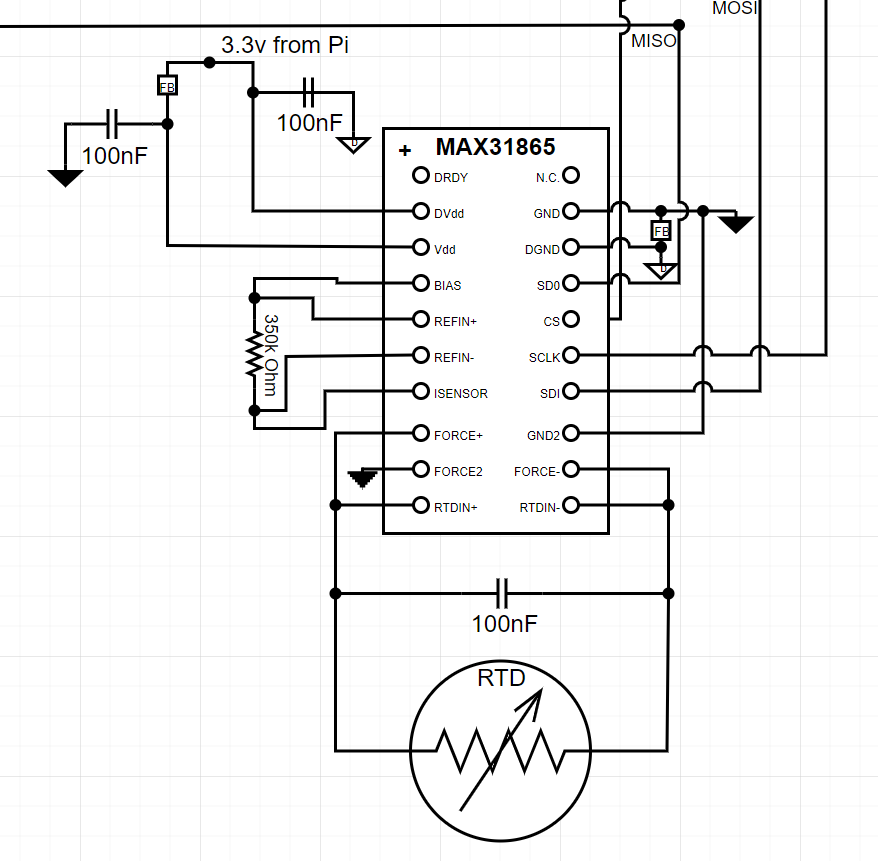 You need to ground the shielding (sheath). This is what keeps you from capacitively coupling noise into your high impedance inputs. Ground reference to the ADC is important. If you don't ground the ADC circuit board, at least put a 1 MOhm resistor to ground to provide some reference.

This chip needs an LDO and caps across thermal sensor and from sensor to ground such that RC>>= 1 second for high impedance types.

It works by computing ratios on a bridge with an equal Ro reference but is designed for low R RTD’s.

So your sensor must match these formulae with constants A,B,C

But for now you have an EMI problem.

Not the answer you're looking for? Browse other questions tagged adc raspberry-pi basic thermistor or ask your own question.