Is there a more realistic circuit simulator than Falstad's?

In real life, the 100mA load in the circuit below will experience a brief, partial loss in current and and a drop in voltage when the 4A load is engaged but this simulator is too basic to show that. I very much like how it visually shows current flow though. Is there something similar but more realistic out there? 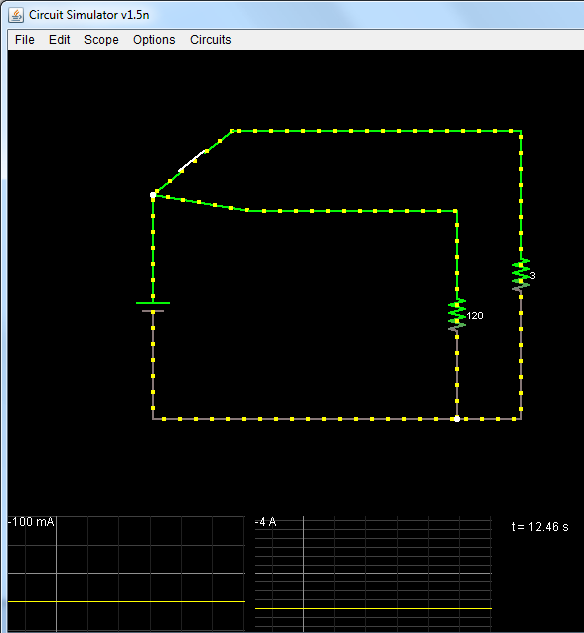 You have connected an ideal battery. If you want a somewhat more real-life representation of a battery, include some series resistance and induction.

I like the Falstad simulator, but it is not without its quirks. With regard to your circuit, I would suggest adding a small resistor and inductor in series with your battery, along with a high-value resistor in parallel with the inductor (the simulator would otherwise get unhappy if the supply got disconnected and left the inductor current with nowhere to go). If you limit yourself to certain components like resistors, capacitors, switches, and inductors (bearing in mind the limitation mentioned above), the Falstad simulator will do a very nice job of simulating things. It's also pretty good for simulating simple logic circuits, though its library of chips is rather limited.

When it comes to simulation of non-linear non-digital components like transistors, the simulator's behavior gets a little dodgier. The problem with such components is that they are often used in circuits where the voltage on a pin will depend upon the amount of current flowing through it, and the amount of current flowing into a pin will depend upon the voltage. Such dependency poses no problems for resistors, since the simulator can model interconnected resistances as a set of linear equations which it can then solve. The relation between voltage and current on the pins of a transistor is too complex to model with such techniques, however, so the simulator must use an iterative approach. Sometimes that approach doesn't work, however, and the simulator will rudely stop with a "Convergence failed!" message.

Despite its limitations, however, the Falstad simulator is rather remarkable. It is the only simulator I can remember using which allows a circuit to be modified during simulation. While this can sometimes have some odd effects, it can greatly facilitate experimentation.

SPICE will give you similar results when using an ideal source, but at least for SPICE there are truckloads of standard libraries available. I bet there are model libraries for primary cells too.

Mind you that Wouter's answer is entirely correct, it only needs a bit of Fingerspitzengefühl (to use a good Dutch word) to pick practical values.

Every circuit android, it allows modifications while running also! Very querky with transistors but has many types and 555 chips. Mince.

Not the answer you're looking for? Browse other questions tagged simulation falstad or ask your own question.

2
How do I make a real-world verison of this LC circuit?
1
Why isn't this Elenco circuit working in Falstad's simulator?
5
NPN transistor seams to be “leaking” in simulation. What is wrong with my circuit?
4
Phasor simulation versus power flow
1
Basic N-MOSFET Circuit Simulation Results
1
Piezo speaker equivalent for circuit simulator
2
What's wrong with this circuit built on opamps?
1
Falstads circuit simulator : capacitors have initial voltage?