Recently I began a project involving some active current limiting using a MOSFET and an Op Amp. It is part of a larger overall circuit involving other Amplifiers.

I would like to perform a block-diagram-style analysis on my circuit in order to investigate loop gain and stability. However, I was stuck when it came time for me to analyze the MOSFET's transconductance behavior. The simplified example below illustrates my problem: 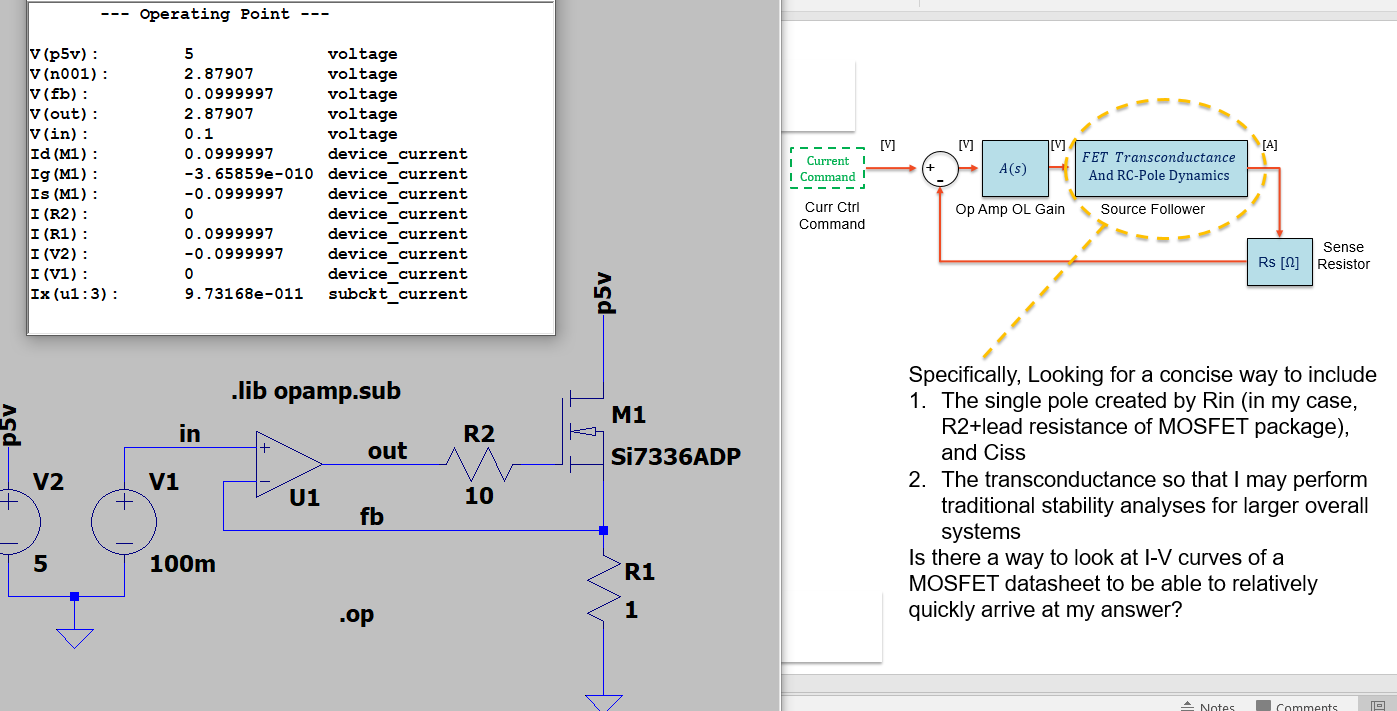 The circled block in the above diagram is what I'm trying to unpack. As stated in the diagram, since this is part of a stability analysis, I really only need the RC pole location and the transconductance.

Is there a way to model any MOSFET Trans conductance amplifier as a single-pole Transfer Function?

How would I go about extracting the necessary parameters from I-V curves within the MOSFET datasheet?

EDIT: More details on what I'm looking for: I understand my dummy example has stability concerns due to the OA's dominant pole and the additional pole from the series R and the MOSFET's Ciss. Of course this leads to instability in some scenarios.

I want to know how to pull out the MOSFET's behavior into its own "block" as seen in the block diagram in my post. I assume its "block" looks something like gm*{Something}/(1+s{Some_Tau}). I'm wondering how to extract the "something" and "some_tau" from datasheets within some reasonable tolerance. I know Ciss varies somewhat, but I'm fine with some reasonable accuracy.

If you want to model it choose the exact part and simulate it , otherwise Ciss increases with decreasing gate R and RdsOn both dynamically during conduction and with bigger parts. So a 1st order model is Rs + Rg+ Ciss, I believe.

However Zo on Op Amp’s rise to the R equivalent or current limit for sub microsecond slew rates e.g. 220 Ohms for BJT types which lowers the pole.

it depends on your acceptable voltage error, slew rates and loop response time required and step load regulation error. Obviously worse for switched reactive loads. So as others have said phase lead compensation helps. .. With RC +R feedback. Simulate it if not sure then breadboard it under dynamic disturbances like a step load.

Is there a way to model any MOSFET Trans conductance amplifier as a single-pole Transfer Function?

FET capacitance varies a lot with Vgs, moving the frequency of the second pole around.

FET transconductance varies with Id, which changes the gain.

This is the closed loop response with AC stimulus on input "Vadj", and stepping DC values on both Vadj and V1 (output voltage). 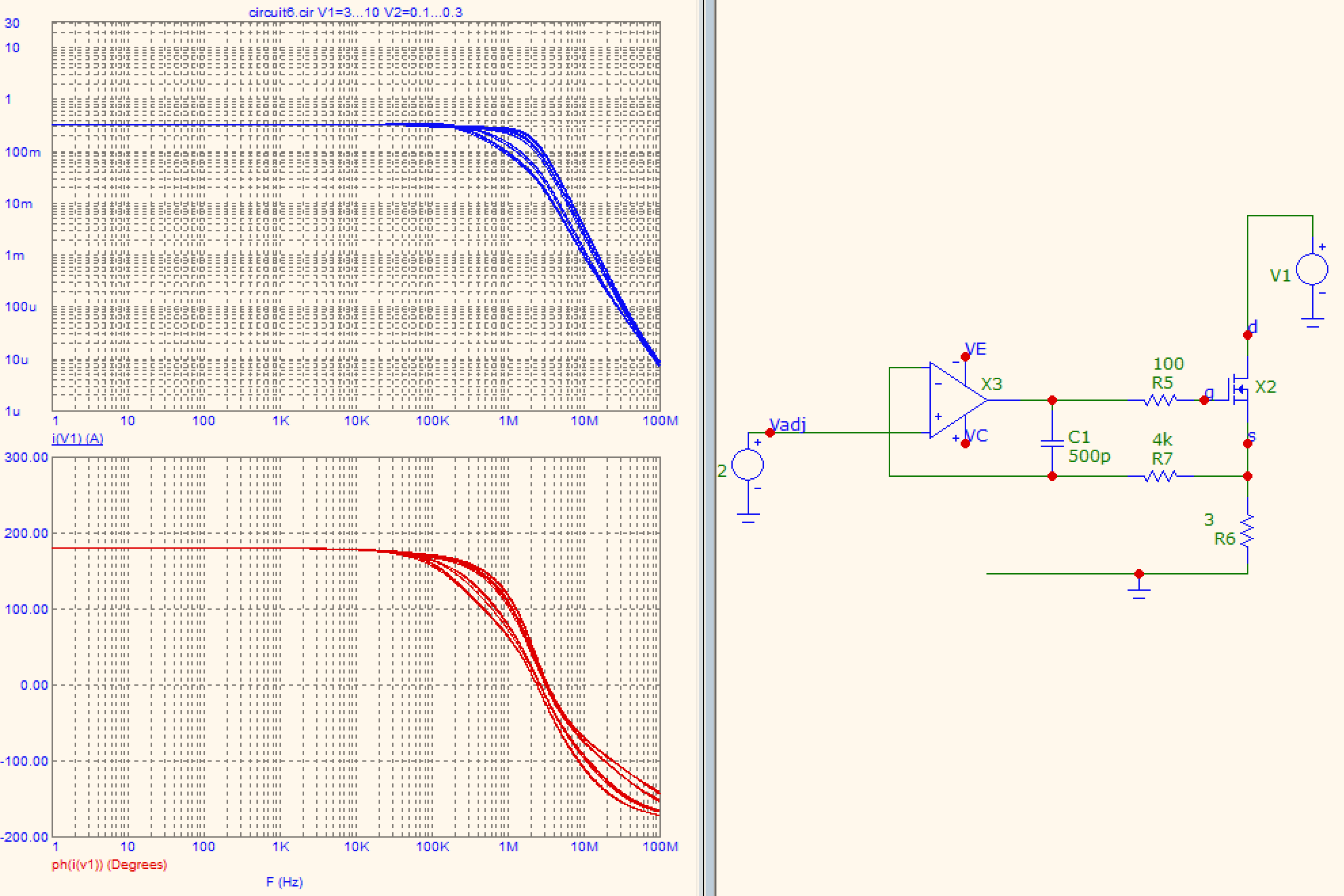 The closed loop transconductance response has two poles and moves around quite a bit depending on current and output voltage.

What I really want to know is how I can treat the MOSFET as its own "block" in the block diagram shown in my OP. I assume it has the form gm*{something}/(1+sTau)

Not really. Plotting the transconductance of the FET (Iout/Vgs) and its phase: 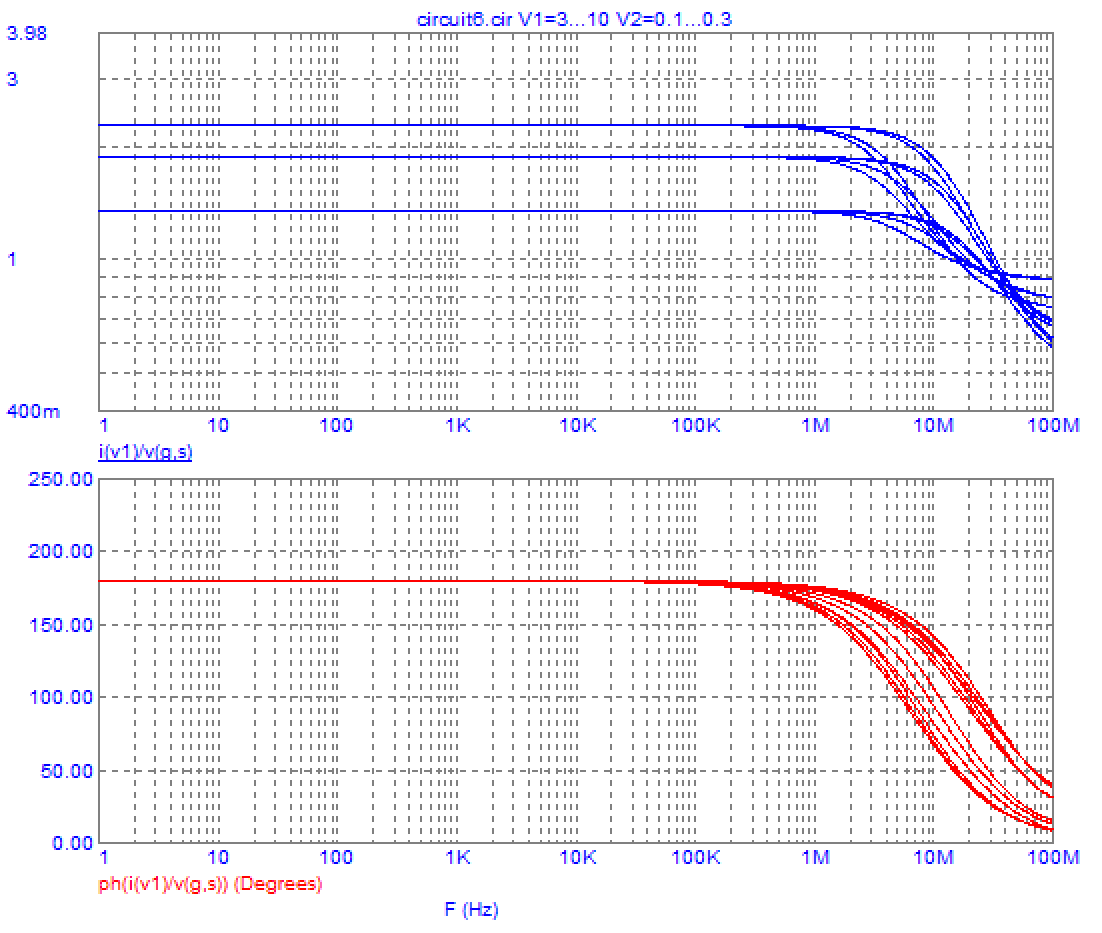 In a common source, you get 2 poles there. Let's choose a positive polarity for the output current (ie, positive when the FET sinks current), that's easier to visualize.

But when frequency is high enough that the FET is no longer in control, because its capacitances dominate the opamp's output drive capability, you can replace the FET with a pair of capacitors, Cgs and Cgd. Some of the gate drive signal passes through Cgd and directly into the output, and this creates a current that is of opposite polarity of what the FET drain current would be.

So, when gate voltage goes up, through Cgd output voltage tries to go UP, which means sink current goes down... So, 180° phase shift, two poles.

Not the answer you're looking for? Browse other questions tagged mosfet stability loop-gain transconductance block-diagram or ask your own question.