So I'm designing a 2-layer PCB consisting of a bunch of ICs (op-amps, OTAs) and passive components. I would like to have my decoupling caps (little 100nF axial) as close to my op-amps as possible, so I've have the following thoughts.

But after some more thinking I don't think this will work, since the soldered pins of the caps would be sticking up directly under the op-amp socket, and might not make the header sit flush or flat on the front-layer, depending on the final soldered pin height.

Here's my solution to this. Mount the caps on the back layer and solder them from the back layer, then just pre-cut the cap pins so they don't poke through into the front layer. Two questions about this however:

For reference, here's a Kicad pic of what I was thinking, in terms of mounting (TL074 on front side, caps on back side): 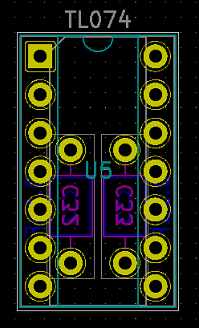 Plated through-holes have metal not only on the far side and near side, but also on the inner edge of the hole all the way through the board. Only on single-sided boards or boards made by unconventional methods (such as milling) will you see pads that aren't plated on the inside of the hole.

Of course, this is all assuming your drill files specify the holes as plated. If you specify a hole as non-plated, then they won't plate it. This is down to how you use your CAD software, but unless you're doing things very wrong with making footprints, all holes where electrical connections are made should be plated through.

From the image you gave, it looks like you're using KiCAD; in KiCAD every through-hole pad is either a PTH pad (standard through-hole with plating on it) or an NPTH pad (which is referred to as "NPTH (mechanical)" in the pad editor, I believe), and this is a property of the pad that you select when making the footprint. All the footprints included in a standard KiCAD installation have the pads appropriately selected; PTH for all the ones that need an electrical connection or where you solder in a mounting pin, and NPTH for all the ones used solely for mechanical mounting with rivets, screws, plastic bumps, or whatever else you may need for a given package.

Not the answer you're looking for? Browse other questions tagged pcb-design decoupling-capacitor or ask your own question.

0
Power rail decoupling caps for analog circuitry
13
PCB microcontroller layout in a mixed-signal system
6
PCB layout: am I doing local power nets correctly?
9
Optimize signal return path with decoupling capacitors in a two layer board
10
Decoupling cap: Closer to chip but with via or farther without via?
0
Decoupling cap on backside: Create separate via?
12
STM32 MCU PCB layout review (crystal & decoupling & ADC)
4
Can I place an electrolytic capacitor close to a solder point on a two sided pcb?
4
Decoupling capacitors on bottom layer in non-BGA packages?
2
PCB Layout Help/Feedback